AMD has over the last few years truly put Intel and NVIDIA on notice, they're not messing around and Intel are trying to create a little fanfare with a tease of fresh 11th gen desktop Rocket Lake-S CPU info.

In a fresh blog post, Intel mentioned their new 11th Gen Intel Core S-series desktop processors code-named "Rocket Lake-S" will arrive in the first quarter of 2021 (so sometime before the end of March). We don't have long until AMD launch Zen 3 with Ryzen 5000 on November 5, so Intel must be a little worried. Amongst other things, Intel are claiming a "double-digit" increase in IPC (Instructions Per Cycle/Clock) which is one of the most important parts when it comes to CPU performance.

Here's the fresh details they trickled out:

We also know a few other details about Cypress Cove, which they linked in a presentation that shows 11th Gen Intel Core S-series desktop processors will max-out at 8 cores: 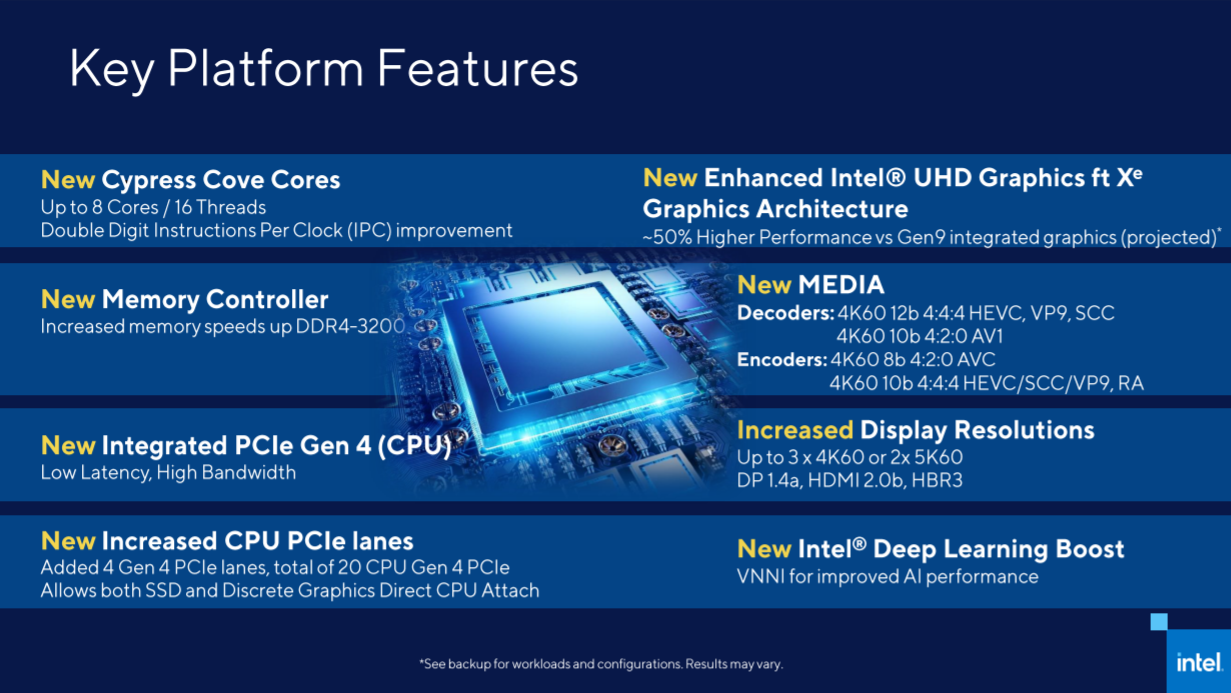 View PC info
I'm hoping I may upgrade my system around Xmas or thereabouts, after the dust has settled on AMD's stuff. My next CPU will 100% be AMD. My current i7 is the only Intel chip I've used since way back. I basically went from a full RISCOS setup (I'm not sure what the CPU was in the add-on "PC" card either) to an AMD CPU. I never bought cutting edge, I went for value for money. My next GPU I'm still undecided on.

Comandante Ñoñardo 30 Oct, 2020
View PC info
I think is not the right time for a cpu upgrade...

I prefer to wait a year or two until Intel or AMD adopt the DDR5 standard
1 Likes, Who?

That's the problem. There never is good time to upgrade as there's always something better coming up soon...
9 Likes, Who?

View PC info
Too little, too late.
Intel will be enjoying delicious karma humble pie for a good while...

That's the problem. There never is good time to upgrade as there's always something better coming up soon...

Done the waiting game before, was stuck on a 7600 GTX for years until I finally went HD5870.

The common sense in me it telling me to wait though for DDR5 but, Shiny Shiny

Having said that, DDR5 will be stupidly expensive at first!

There, I do have an excuse

View PC info
At first DDR5 will have little to no benefit over DD4 and will be more expensive to boot. It's generally a year to a year and a half after the new standard is introduced that you get tangible benefits. This happened going from DDR to DDR2, DDR2 to DDR3, DDR3 to DDR4, it's always the way.

In what way? I am using even an even older generation and I really haven't found much reason to upgrade yet.
1 Likes, Who?

Comandante Ñoñardo 2 Nov, 2020
View PC info
Intel, in fact, is planning a CPU with DDR5 support) for next year.
0 Likes
While you're here, please consider supporting GamingOnLinux on: