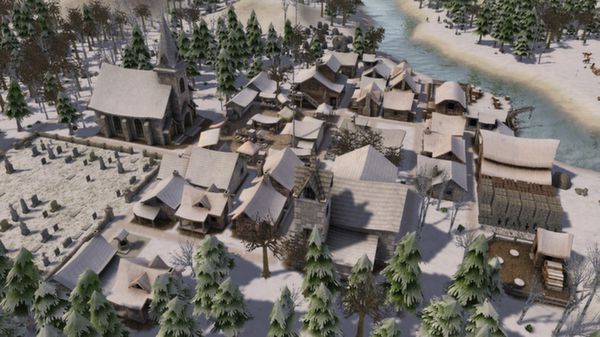 The excitement is building within me about this, as I've wanted to try the harsh city builder Banished ever since I first heard about it.

The developer has taken to their blog again:

If this current beta build comes back clean after a few weeks (or after a few fixes), I’ll push it out as an official build.

Once the Mac and Linux builds are ready there will be a Beta test for them as well. For modding, the only thing that may change is that you may have to recompile mods to get new audio to work on other platforms – but otherwise existing mods should load on other platforms. I know there’s a few requests for a few other changes to the mod kit, and I’ll be looking into some of them to determine how easy (or difficult) the more desired ones are.

It's not only great to see a port coming, but to actually have another enthusiastic developer on-board with us and blogging about porting is great.

About Banished
In this city-building strategy game, you control a group of exiled travelers who decide to restart their lives in a new land. They have only the clothes on their backs and a cart filled with supplies from their homeland.

The townspeople of Banished are your primary resource. They are born, grow older, work, have children of their own, and eventually die. Keeping them healthy, happy, and well-fed are essential to making your town grow. Building new homes is not enough—there must be enough people to move in and have families of their own.

Banished has no skill trees. Any structure can be built at any time, provided that your people have collected the resources to do so. There is no money. Instead, your hard-earned resources can be bartered away with the arrival of trade vessels. These merchants are the key to adding livestock and annual crops to the townspeople’s diet; however, their lengthy trade route comes with the risk of bringing illnesses from abroad. Article taken from GamingOnLinux.com.
Tags: City Builder, Steam, Strategy, Upcoming
0 Likes
We do often include affiliate links to earn us some pennies. We are currently affiliated with GOG, Humble Store and Paradox Interactive. See more here.
About the author - Liam Dawe

View PC info
Excellent but tough as balls city builder. Will be waiting and hoping that the gog version gets updated as well. :P
1 Likes, Who?

Stupendous Man 31 Oct, 2015
View PC info
Finally! I bought this when it came out to play it with Wine (I've learned better since) and played it for a few hours. It was quite fun, though the sound was very bad under Wine so I eventually stopped playing it and haven't touched it since a Linux port was rumoured.
0 Likes

View PC info
Nice! I got Banished through the gog pinata sales, been waiting to play it! :D
0 Likes

View PC info
The Steam version barely works for me through Wine, so it'll be wonderful to actually play the game. Good timing too, almost exactly a year after I received it as a Christmas present.
0 Likes

Farmboy0 31 Oct, 2015
View PC info
There seems to be a line missing after the heading About Banished
0 Likes

rudeboyskunk 1 Nov, 2015
View PC info
Awesome! I love city builders (favorite was 1602 AD). Having a good one on Linux will certainly make me happy.

Also, Liam - it looks like the beginning part of the first sentence after "About Banished" got cut off.
0 Likes
1/3»
While you're here, please consider supporting GamingOnLinux on: