Cosmochoria Released For Linux In Early Access, It's Fun 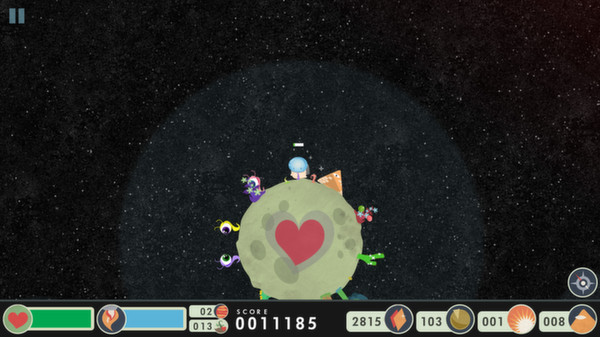 Cosmochoria is a funny little game that puts you in the space-suit of little naked cartoon cosmonaut who jet packs around space.

The game although it is in early access is very playable right now, and it's quite fun as well. The Linux version of the game seems to be well done as far as I can see with no immediate problems that I noticed at all, so it's great to see early access games come out that actually work reasonably well. That's a refreshing change of pace from other early access releases.

There's a lot to like about the game, especially when an official feature is "Grow plants to fill dead planets with your Love Juices." who could pass up the chance to do that? Just don't use up all your fuel and fly off into space risking certain death.

If you give it a go let us know what your high score is, I managed to get over 6000 in a quick run before landing on a planet with lots of aliens, a hive and an alien spaceship decided to come along and drop another alien on my head, ouch. The game is a high-score fest, so once you die that's it and you have to start again. That doesn't remove the fun though like a lot of perma-death games it leaves you wanting a bit more.

My only issue is that right now the game does feel a little bit empty, so I will be interested to see it grow while in early access.

Be sure to check out Cosmochoria on Steam for Linux now.

We do often include affiliate links to earn us some pennies. We are currently affiliated with GOG and Humble Store. See more here.
About the author - Liam Dawe
I am the owner of GamingOnLinux. After discovering Linux back in the days of Mandrake in 2003, I constantly came back to check on the progress of Linux until Ubuntu appeared on the scene and it helped me to really love it. You can reach me easily by emailing GamingOnLinux directly.
See more from me
Some you may have missed, popular articles from the last month:
The comments on this article are closed.
1 comment
COMATOSE 13 Oct, 2014
http://youtu.be/WtayWzdkhUY
0 Likes
While you're here, please consider supporting GamingOnLinux on: