By BTRE - 6 June 2017 at 5:55 pm UTC | Views: 7,475
Armchair generals everywhere have been busy fighting and conquering ever since the release of Hearts of Iron 4 [Official Site] last year. The game by Paradox Development Studios gives players the chance to pick any country that existed in 1936 and play out the conflict that follows. Achieving ultimate victory requires managing more than military and industry, resources, research, and diplomacy all factor into gameplay. I’ve personally sunk in hundreds of hours with the game in both singleplayer and multiplayer modes.

I’m glad the game is still getting new content regularly and the inclusion of Polish voices is unexpected but ought to make at least a few people happy.

Paradox have also detailed a few interesting statistics in a bonus developer diary. The highlights include that the playerbase has been growing steadily since launch, which countires are played the most and that mods are incredibly popular for the game. As someone who plays about half of his games running Kaiserreich, I can attest to just how excellent the mod community is for Hearts of Iron.

The second paid DLC for HoI4, called Death or Dishonor, is also due June 14th. PDS is calling it a country pack as its focus is on some of the smaller nations in the Balkans and Central Europe. It’ll be launching with a sizable update which will be overhauling the air combat system among other things, so there’s plenty to look forward to there.

You can check out the announcement trailer for Death or Dishonor below: 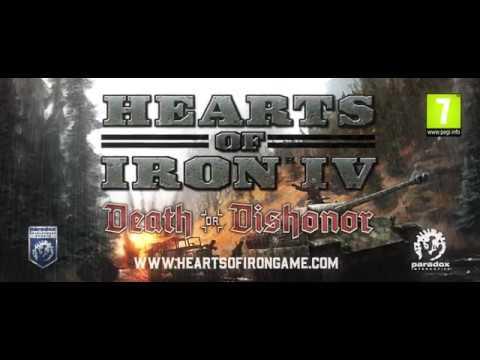 Mountain Man 6 Jun, 2017
View PC info
People complain about the Paradox DLC model, but they are, in fact, one of the most generous developers.
2 Likes, Who?

Quoting: Mountain ManPeople complain about the Paradox DLC model, but they are, in fact, one of the most generous developers.

Beyond that, these days they're honestly one of the closest companies out there to the old "expansion pack" style of stuff.
0 Likes

Quoting: Mountain ManPeople complain about the Paradox DLC model, but they are, in fact, one of the most generous developers.

Some of their DLC is very good.
But some like Protraits in CK2 feel like Horse Armor.
I'm neutral on the issue. I like when they add content , I hate (what I consider to be) over priced fluff.
0 Likes

View PC info
There's also the Third Rome "immersion pack" for Europa Universalis IV releasing the same day, and if you're going to get both (like me) you can get 10% off by pre-ordering them together.

Need to hurry up and finish my first campaign I guess, I learned the hard way that invading Japan with 12 divisions as New Zealand doesn't get you anywhere good. :P
0 Likes
Purple Library Guy 6 Jun, 2017
So can I be Canada and conquer the US in this? Always kind of wanted to do that. ;)
0 Likes

Quoting: Purple Library GuySo can I be Canada and conquer the US in this? Always kind of wanted to do that. ;)

Canada starts with pretty bad infrastructure and production facilities in this game.
Easier to come up from Brazil actually.

View PC info
Thanks for the freebie Paradox! :D Looking forward to the new expansion too.
0 Likes

Mountain Man 7 Jun, 2017
View PC info
I tend to wait for big Steam sales when the piddly cosmetic stuff is dirt cheap.
2 Likes, Who?
While you're here, please consider supporting GamingOnLinux on: