Life is Strange: Before the Storm is officially coming to Linux, port from Feral Interactive

Life is Strange: Before the Storm [Steam], the standalone story adventure set three years before the original is officially heading to Linux! Feral Interactive have today announced that it will arrive sometime this Spring.

Feral Interactive ported the original Life is Strange episodes to Linux, so I’m not surprised they’re teaming up again to bring Before the Storm to Linux. I think they did a very good job of the port before and I certainly enjoyed it a lot. Life is Strange: Before the Storm - Deluxe Edition for Linux will include all three episodes along with the bonus episode, "Farewell".

This standalone prequel isn’t actually made by the originally developer Dontnod, instead the the publisher picked Deck Nine. 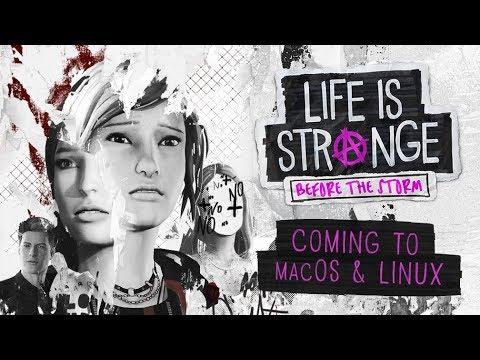 “With its tough yet vulnerable protagonist, Life is Strange: Before the Storm is a poignant evocation of teenage life,” said David Stephen, Managing Director of Feral Interactive. “The atmospheric soundtrack, sharp writing and captivating story combine to create an engrossing and moving game, and we very are excited for macOS and Linux players to experience it.”

Feral said that pricing and system requirements will be confirmed closer to release. You can see the official news post over on the Feral Interactive site. They also now have a mini-site set up for it with a few more details.

This is the third confirmed port from Feral Interactive for Linux this year, so we will have: Total War: THRONES OF BRITANNIA, Rise of the Tomb Raider and now this as well!

Will you be grabbing a copy when it releases for Linux? Exciting times!

Will update the article later with any more information once the official press stuff has been sent out to us.

We do often include affiliate links to earn us some pennies. We are currently affiliated with GOG and Humble Store. See more here.
About the author - Liam Dawe
I am the owner of GamingOnLinux. After discovering Linux back in the days of Mandrake in 2003, I constantly came back to check on the progress of Linux until Ubuntu appeared on the scene and it helped me to really love it. You can reach me easily by emailing GamingOnLinux directly.
See more from me
Some you may have missed, popular articles from the last month:
The comments on this article are closed.
85 comments
Page: 1/9»

QuoteWill you be grabbing a copy when it releases for Linux? Exciting times!

View PC info
Awesome! Another one for the bucket list. First one was an amazing experince, hope this one has a similar approach :)
1 Likes, Who?

View PC info
Awesome. Time for a fourth play-through then. Is that healthy? Gosh, I love these games so much.

I highly recommend this. Just keep in mind that it's not about the ending, it's about the journey.
2 Likes, Who?

Quoting: BrisseJust keep in mind that it's not about the ending, it's about the journey.

Sure. But I wish the endings weren't such a Bury-Your-Gays downer, tbh.
0 Likes

View PC info
Instabuy on release for sure! I loved the first game and this one has great reviews (94% for BtS vs 96% for LiS!). Quite surprising, considering it's from another developer and doesn't include the main character from LiS and the main game mechanic (time rewind). Such decisions are not welcomed by the playerbase usually, so it's amazing how they managed to make a great sequel. It's really hard to catch all the little details and the atmosphere the players loved in a way that it doesn't feel recycled or cheap. Looks like these guys did it perfectly!

I hope it'll come out in April or so, seems realistic as it's on Unity.
3 Likes, Who?

Quoting: DrMcCoySure. But I wish the endings weren't such a Bury-Your-Gays downer, tbh.

Seen several articles on https://www.rockpapershotgun.com/ which calls the game out for this, but I'm not sure I agree. Both of these are not the fault of Before the Storm, but the original game. There's no way Before the Storm could have changed the outcome for these characters. Also, the game is about loss and tragedy which I think is a big part of what makes it so relatable. Would it be as emotionally powerful if the developers shyed away from these themes? I doubt it. It will be interesting to see where LiS2 takes it. I don't want to see them overdo it.

I didn't expected to like it so much either. They focus on the story a lot, so rewind is not something to be missed. And this is not by any means just a fan service game. The bonus episode is, but not the main game. I really like what clever ideas they have to keep you engaged, not just endless "talking".
1 Likes, Who?

I didn't expected to like it so much either. They focus on the story a lot, so rewind is not something to be missed. And this is not by any means just a fan service game. The bonus episode is, but not the main game. I really like what clever ideas they have to keep you engaged, not just endless "talking".

Great! Often even the same developer can't reach the bar they set in the original game. The first game was "mostly" concluded so any prequels or sequels looked not that necessary and could have been considered a money grab. I didn't hold my breath on this one, there were some red flags, like, the dev makes a sequel and the prequel is basically outsourced to a 3rd party (= not that important) at the same time, the engine was changed, what good could ever come out of this mess?! Quick money for sure and then a proper sequel of the same or better quality as LiS. I think I've never been this wrong for my whole life, if they really brought new gameplay mechanics, the story is as engaging and the characters are as good as in LiS. A mistake I'd love to make more often.
1 Likes, Who?

View PC info
Awesome news! I played and loved Life is Strange on Linux, and I'm really looking forward to playing the prequel too.

I'll definitely grab it on day 1, and directly from the Feral Store to give them the highest cut possible.
1 Likes, Who?

View PC info
I will actually buy it now :D
0 Likes
1/9»
While you're here, please consider supporting GamingOnLinux on: