So I Played… FORCED SHOWDOWN

FORCED SHOWDOWN is essentially an arena shooter with a card-based upgrade system that promises some frantic gameplay, but is it any good? I tried to find out. 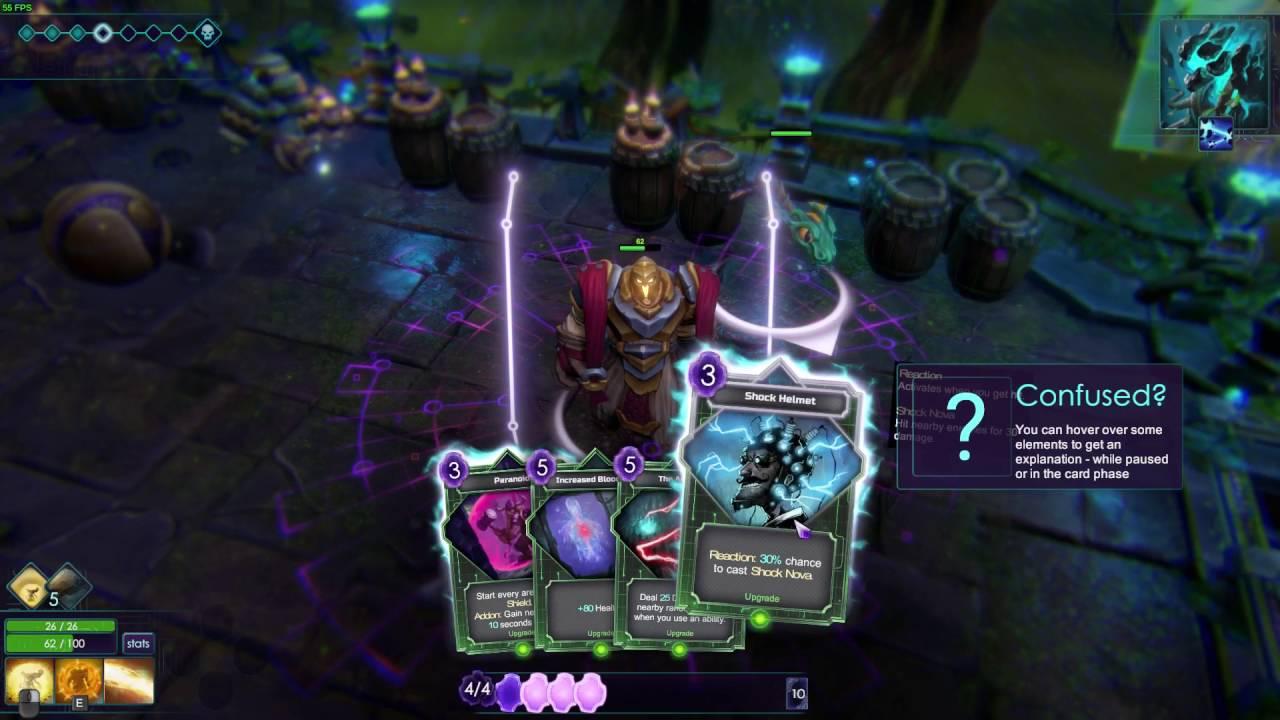 YouTube videos require cookies, you must accept their cookies to view. View cookie preferences.
Accept Cookies & Show   Direct Link
I have to say I am very impressed with not only how smooth the gameplay is in FORCED SHOWDOWN, but how fun the battles actually are.

The start of the game is incredibly easy, but it's one of those starts that eases you in with a gameplay tutorial and easy enemies. Once you get past the initial two boss battles things to start to heat up somewhat.

I actually failed my campaign quite early on, as I wasn't expecting one of the enemies to be as strong as they were, be sure not to underestimate the enemy strength and remember to keep using your abilities.

It feels almost like playing Dota 2 at times in small sized arenas, and that's a really good thing. I actually really like Dota 2, but I hate the community, so FORCED SHOWDOWN has been really exciting to play.

At the start of each round you get to pick different cards to put into play to heal, gain new abilities and so on. It's a really cool idea and I love games that blend different genres together. You could end up with cards giving you more health, extra companion units to fight with you or special abilities that trigger now and then.

The battles are never the same, as each time you do a new run, the arena has a different rule attached to it. Sometime you may get a rule that reduces your health if you start the battle with a certain amount of cards left unused, or even starting you off at 50% health. They certainly don't make it easy, and the challenge has kept me going for a while.

There have been plenty of battles were I've won with so little health my heart was actually racing when I finished it, I even let off a little "woohoo!" once.

During matches you collect points which will unlock special extras for you too, like extra health. There's just so many things like that in the game that make it a pleasure to keep coming back.

I haven't wanted to put it down since I started playing it, so I consider it a must buy.

Issues
The only issue I have encountered is that it will load up on the wrong screen every time. This is easily solved by making it go to windowed mode, moving it to the right monitor and then telling it to go fullscreen again. A minor issue, but still an issue.

Article taken from GamingOnLinux.com.
Tags: GOL Cast, Initial Thoughts, Review, Video
0 Likes
We do often include affiliate links to earn us some pennies. We are currently affiliated with GOG and Humble Store. See more here.
About the author - Liam Dawe

Mountain Man 5 Jul, 2016
View PC info
I played Dota 2 once and made the mistake of mentioning that I was a new player. This is apparently an unforgivable sin in the sight of some.
2 Likes, Who?

Quoting: mr-eggNot everyone out of the 2 million + player base ( is it more now ? ) is going to be an ass hat.

Of course not, but after having an immense amount of hours in it myself I am well informed on the Dota 2 community.
2 Likes, Who?

Forced .. never really got around playing it, maybe I'll do a session in the living room soon since I have gotten my Steamlink (finally). But I'm currently a bit "locked up" with Talos Principle... such a cool game.
1 Likes, Who?

Quoting: Mountain ManI played Dota 2 once and made the mistake of mentioning that I was a new player. This is apparently an unforgivable sin in the sight of some.

Being new eh. Now being a teenager or from league of legends, watch the avalanche cometh over you.

View PC info
@liamdawe Did you play the original Forced, and did you like it? I'm asking because I didn't really care for it, so I'm wondering if this game is similar or might be something I'd prefer.
0 Likes

View PC info
yep, I was playing forced showdown non-stop up until a day or so ago. I've beaten Ruby von Wouthingtonne IV in Frontline, that is a tricky battle. the first fight of the game that will make you almost pull your hair out the first time you fight her.

The Grand Return seems to almost double in difficulty, so I'm not going to try and push through that content. I'll take it nice and easy from time to time. mostly I just keep farming gold from the first run with a difficulty modifier to make it a level 6 modifier. which yields 780 gold plus whatever bonuses you got during play. which typically I end up with around 900 gold to spend on the fortune slot machine to try and gain the cards I'm missing.
The game seems to be very adamant about not allowing me to get the squire of the light's cards, of course the squire is my favorite to play, lol.

Although I've practically gained double supreme on a number of the cards for the other characters in the game. I'm starting to like Volco a lot, and I'm working on a decent deck for Stormbringer and Ravager.

But I feel beating the last portion of the game will require certain types of decks that are streamlined so this will require almost all the cards to be unlocked.
0 Likes

Quoting: melkemind@liamdawe Did you play the original Forced, and did you like it? I'm asking because I didn't really care for it, so I'm wondering if this game is similar or might be something I'd prefer.

I know you asked Liam, but I just want to say that I didn't care for the first Forced game all that much. But I do like playing card games and action or hack'n slash sort of games. Forced Showdown is a mix of all that, and is very enjoyable if you like all those things.
0 Likes

Quoting: melkemind@liamdawe Did you play the original Forced, and did you like it? I'm asking because I didn't really care for it, so I'm wondering if this game is similar or might be something I'd prefer.

I know you asked Liam, but I just want to say that I didn't care for the first Forced game all that much. But I do like playing card games and action or hack'n slash sort of games. Forced Showdown is a mix of all that, and is very enjoyable if you like all those things.

Another that comes to mind based on your description is Hand of Fate, in case you haven't got it yet. I dig it.
1 Likes, Who?
1/2»
While you're here, please consider supporting GamingOnLinux on: