Holy cow! Jagged Alliance: Flashback has just been put up on Kickstarter with Linux support right in! 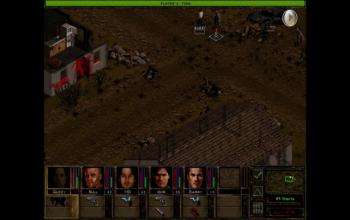 QuoteJagged Alliance: Flashback is our vision of returning a once critically acclaimed franchise back to its roots, it's not a reboot, it's a reset!

Our main goal is to bring back the tactical turn-based action that the original Jagged Alliance games are known for - the game was a thinking man's game, a thinking man with lots of guns!

The games were unique in their blend of tactical turn-based action, controlling and maintaining squads of mercenaries, off and on the battlefield. As a player the decisions you made had a direct impact on how you played the game. Additionally, over-the-top personalities, memorable characters and role-playing elements made the games difficult to put away once you were hooked.

The original games are quite highly rated so maybe it's time to test them in Wine and see if we can remind ourselves of the story?

What is great is the will offer a DRM Free version as well as other distribution methods:

QuoteWe will give you a choice of distribution, always including a DRM-free option, for both the core game and future expansions.

Our target platform is PC and the game will be available for Windows, Mac OSX and Linux.

Awesome! But they do note it's a risk for them:

Quote* DRM-free delivery - finding good distribution channels to deliver on all 3 platforms. GOG is the obvious choice for Windows and also Mac. But what about Linux? Time will tell and worst case we will distribute the game to Linux owners ourselves.

So hopefully lots of people can suggest Desura to them for example who offer stand alone downloads direct from the website, or Gameolith for example.

You need to fork out $25+ to secure a digital copy of the game, so get your wallets ready folks!

It is really great to see some of the old greats get revived especially when they will come to Linux as well, this will be a sure hit I've no doubt.

sobkas 23 Apr, 2013
View PC info
Or try a native version:
http://tron.homeunix.org/ja2/ get the source code and build yourself a native version
[removed tuxgames link] (I didn't used it for so long, it just pains me to see tuxgames in such state)
By buying a native versions, you help Linux grow.
0 Likes

View PC info
You do not support Linux by using Tux Games, I have seen far too many posts from people not getting their games or waiting months for them. The best way to support this one is to support the Kickstarter.

Quoting: liamdaweYou do not support Linux by using Tux Games, I have seen far too many posts from people not getting their games or waiting months for them. The best way to support this one is to support the Kickstarter.

Fixed.
What I can say, I have a boxed(keep case) copy of native JA2 version from tuxgames. I didn't wanted to be so harsh on them, but You are right, tuxgames I used to know is no more.
0 Likes
Guest 23 Apr, 2013
There was actually a massive bug with Tux Games; where, if you "order" a game for digital download copy and then cancel the order in PayPal, you get the download link for the game for free.

Worked on JA2, Software Tycoon, Ankh (and 2) and Jack Keane, among others (I ended up ordering everything available) -- some games were obviously DRM'd so they crapped out.

Before you ask though, I had sent several emails about it with no response to any of them.
0 Likes

Also posting you know what here, might be not a good idea. It might cause some unnecessary problems. It's only my opinion, please don't treat it as request or something.
0 Likes
While you're here, please consider supporting GamingOnLinux on: