By David J. Sushil - 18 September 2013 at 2:56 pm UTC | Views: 6,876
At Terncraft Games, we recently announced that our upcoming title, Neo-Victorian Skirmish Squad, will support Linux.  The announcement was made via our Kickstarter campaign, where we are seeking crowdfunding to bring this sprawling, art-rich adventure and role-playing game to life.

In Neo-Victorian Skirmish Squad, the faculty, staff, and students of John Brummel University must combat hordes of invading monsters. To do so, they’ll need Battle Dice – ancient and terrible tools of war that turn ordinary Yacht-like dice games into blood sport. Every die in your pocket can be leveled-up, trained, and fused with other dice to create powerful and effective weapons. When a hero completes a scorecard, points earned in each category translate into stats, which progress the character through ten levels of development. 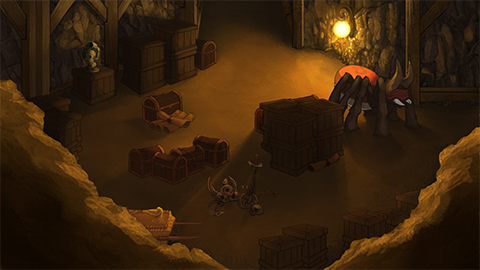 We've barely scratches the surface! You can use Battle Dice for a wide variety of challenges – from winning combat, to disarming traps, to solving enigmatic riddles. Casual players will find themselves engrossed in the game's whimsical narrative and breezy surface gameplay, while die-hard RPG fans will appreciate the depth and richness of Neo-Victorian Skirmish Squad's innovative dice mechanics.

Key Features
• Enhance your heroes with 12 unique Battle Dice
• Explore sixteen beautiful environments
• Battle ten terrifying and/or adorable monsters
• Enjoy a fully-realized, whimsical narrative
• Play as four enigmatic characters, each with unique abilities
• Promote your game with endless arena battle action
• Collect lore pages, and learn the secrets of the University
• Complete your beastiary, and be the envy of all your friends
• Unlock achievements, and achieve a greater sense of self-worth

Terncraft Games
You might be wondering: "Who are the handsome and intelligent people who came up with this stuff?" For starters, we're passionate about making great games. Our co-founder, David J. Sushil, is best known for creating Vanessa Saint-Pierre Delacroix and Her Nightmare, an indie game that won several awards, including a spot in the prestigious PAX 10 Showcase (2011). Neo-Victorian Skirmish Squad's unique look is provided by Samantha Poslinski, who made her indie game debut in Not Without You, a puzzle game featured in the Boston Indie Showcase at PAX East in 2012. Rounding out our team is Adam Jones Productions - the business end of Terncraft. AJP's claim to fame: their flagship title, Word Drop, has received over 300 million plays to date.

Why Kickstarter?
As you can probably tell from our launch video, we've put a lot of hard work into Neo-Victorian Skirmish Squad already. We've completed a great many animations, environments, gameplay mechanics, and narrative elements. We've also successfully deployed the game on Windows PC, Mac, iOS, Android, and Windows Phone 7. In short, this isn't just a concept - it's a product, and it's rapidly nearing completion. With your support, we can make Neo-Victorian Skirmish Squad bigger, badder, and more accessible. With your support, we intend to bring this innovative game to a wider variety of platforms, including OUYA, Windows Phone 8, Blackberry 10 - and of course, Linux! With your involvement, we can also bring the rich and intriguing world of John Brummel University into greater focus, expanding our collection of heroes, monsters, and environments. In short, during the development of this game, we've discovered more. Let's explore this new territory together! Article taken from GamingOnLinux.com.
Tags: Adventure, Crowdfunding, Indie Game, RPG, Unity
0 Likes
Share

We do often include affiliate links to earn us some pennies. We are currently affiliated with GOG and Humble Store. See more here.
Some you may have missed, popular articles from the last month:
The comments on this article are closed.
1 comment
Lord Avallon 19 Sep, 2013
I liked it, the art style is very beautiful (I like hand draw graphics a lot!).
0 Likes
While you're here, please consider supporting GamingOnLinux on: