In Bolt Riley become a Jamaican Reggae legend in an adventure game co-designed by Corey and Lori Cole (Creators of Quest for Glory series). 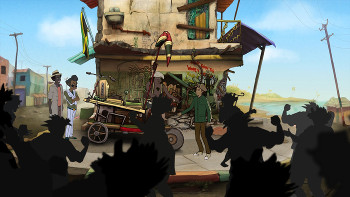 You play as Bolt Riley, a poor boy from Trenchtown, Jamaica, on his pathway to stardom.

Bolt is struggling to survive and has to deal with a gang of Rude Boys. You go through a journey of self discovery, of love, friendship, and inspiration, where you are introduced to Reggae music, you have to form your band, get inspiration, write and produce your songs and then perform them. The story consists of three parts each focusing on a different aspect of Bolt Riley’s passage into becoming a Reggae legend.

This is the true story of the underdog who breaks out and becomes a worldwide sensation.

Is there anything to not love about this one?

The game is from the same developer who made Star Shipping, so they have a proven track record which should also boost their trust.

What do you think boys and girls?

I am the owner of GamingOnLinux. After discovering Linux back in the days of Mandrake in 2003, I constantly came back to check on the progress of Linux until Ubuntu appeared on the scene and it helped me to really love it. You can reach me easily by emailing GamingOnLinux directly.
See more from me
Some you may have missed, popular articles from the last month:
The comments on this article are closed.
3 comments
William Koontz 27 Oct, 2013
I feel irie!
0 Likes