I had some time to chat to Pasi Kainiemi a developer on the Running With Rifles team about the game and Linux.

I also decided to give it a proper run-down on my upgraded machine, so behold a glorious video of RWR on Linux Mint. 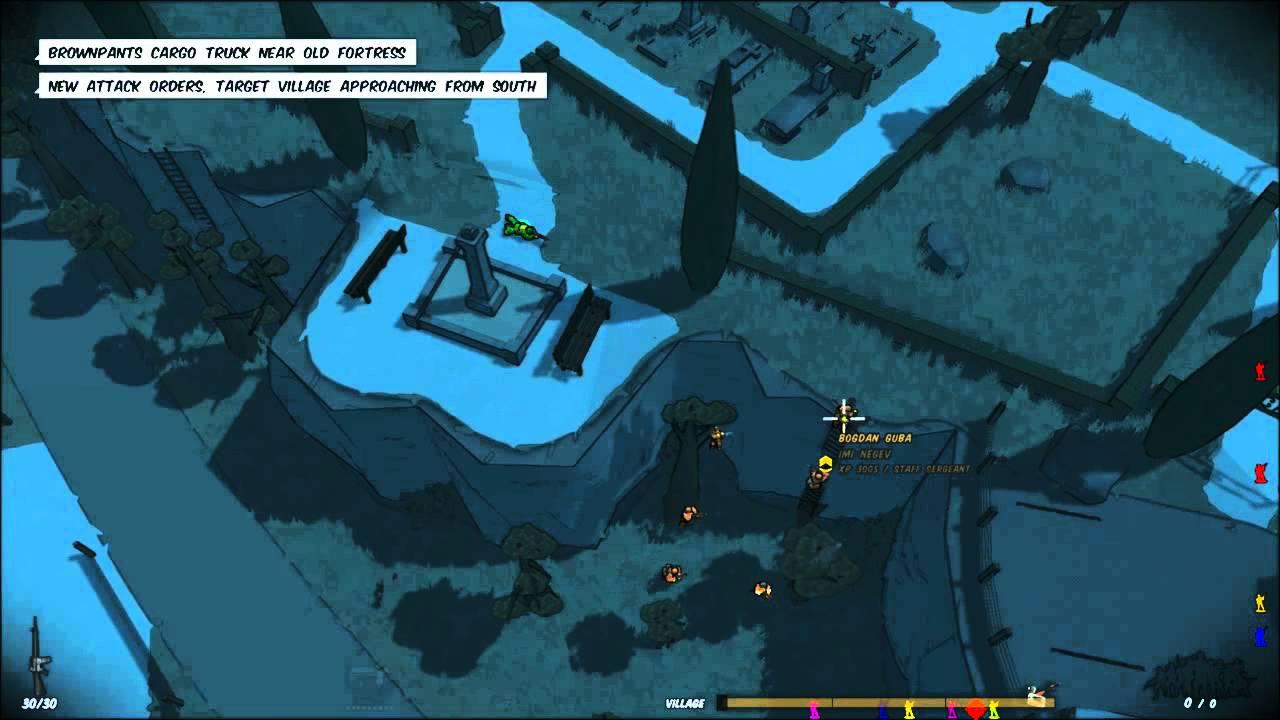 YouTube videos require cookies, you must accept their cookies to view. View cookie preferences.
Accept Cookies & Show   Direct Link
This is some of the most genuine fun I have had doing a video for a game for a while, especially the end part where I found a Jeep (look at 8:40), and then proceeded to run my own team over and force an enemy to jump the barrier into the water to escape certain splattering. Brilliant.

First off all can you introduce yourself and your game


QuoteI'm Pasi Kainiemi, software designer and hobbyist game dev from Finland. Since early 2011, I've been working with all the programming involved in this game project, the overall gameplay and visual design, and am still trying to keep some level of focus of where the game is going and growing.

I was joined by Jack Mayol from Germany (he's French actually) when RWR had been under development for a bit over a year. He's doing all the map work these days, creates the graphics assets and helps out with design and balancing, promotion, testing, everything. He's a life saver really.

As for the game, RUNNING WITH RIFLES is a top down military shooter with non-linear open world and RPG elements, for both single player and online multiplayer. Multiplayer can go up to at least 52 players with a few hundred bots on one server, that's the record we've managed to try out so far.

What makes your game different to other top down shooters?


QuoteRWR's premise is that it puts you, the player, as just another grunt among hundreds of fellow soldiers against one or two enemy factions of similar grunts in an epic war to conquer all the land. We've used phrases like "The war goes on without you" and that's exactly what's going on; the player is just an extra element in the AI's world. The soldier AI in the game is the biggest focus area one might say, and it's certainly something that doesn't come across too often in such small scale indie games.

RWR can also be considered as a hard game in terms of difficulty. Despite its casual cartoony looks, the player gets killed so easily in the game that to actually be of any use for your faction, you need to learn to use the cover system properly, use the different stances to improve accuracy, time your reloads right, deploy cover to fill open spaces or use the vehicles to provide more cover, and even flee when you need to flee. You don't get health regeneration by ducking down, heck, you don't even have such thing as health :) One good shot and you're down - then you respawn as another soldier.

How easy/hard was it to support Linux? What Linux specific issues did you have to overcome?


QuoteFrom the start of the project, I had been targeting cross-platform support so I cherry-picked components that work with that idea as far as possible. We use Ogre3D as the graphics engine, ENet for networking, OIS for input handling, OpenAL for sounds, so getting over to get things running on Linux wasn't that hard in the end.

Being not much than a noob with Linux, I'd say the biggest obstacle was with gaining knowledge on how to deal with dependent libraries so that the game would be compatible with as many distros as possible without going open source with it. Eventually someone pointed out that I can just bundle the libraries and use a launch script that will make the game able to find and use those libraries that were provided in the game package, and that would work fine with 32-bit libs in 64-bit system too. Somehow finding this bit of information wasn't as easy as one might've thought of - at some point we had players manually installing bunch of dependencies and well, that didn't work out too well.

Of course there had to be some kinks with that approach too, trying to pick the distro on what to build the game on initially and where to draw the dependencies, but with enough trial & error it seems we ended in an spot that mostly works. VMWare also saves from a lot of hassle in this.

Another source of issue is ATI/AMD GPU's and proprietary Linux drivers. At this moment the game refuses to run with that combination, and as a two-man team we can't but accept that that's the way it's going to be for quite a while; luckily it runs just fine with the open source drivers. NVIDIA seems to be in a better spot in that regards.

How have you found working with Desura to put your game up?


QuoteDesura has been fairly ok, their web-based control panel is pretty straightforward and user friendly. They also offer standalone installer download option, so players who don't want to install Desura in their system, can just download the game through their website. In such case you'll lose the automated update downloads, but hey, it's your choice.

The main problem with Desura from developer point of view, and this one is a massive one, is that they have some manual authorization thing going on which requires someone from their staff to approve every single patch made to a game before it gets published. So with the system they've got in place, it's impossible to make quick critical patches or adjustments close to weekends for example, as the changes won't be approved until Monday or Tuesday. It's seems a bit odd policy for games that are tagged alpha.

Also it wouldn't hurt for them to have some way of providing automation for creating the patches. Having a game with two supported platforms and providing the standalone installers, making a new version available can mean having to uploads the content through 4 different places, some in Desura desktop app, some in web. It's all fine when you're getting started with Desura so that you realize what things need to be done, but something like a build script you can set up to do all that monkey work would be greatly appreciated when you've done it manually for the umpteenth time. That's also one reason we've still skipped on starting the Mac port; the update release process just comes with too much manual work and thus also with a big human error factor.

How have you found working with Steam to put your game up?


QuoteSteam's control panel is much more complex than Desura's, with both good and bad things. I'd describe the first impression as overwhelming; all you want to do is put something up for download and set up the store page and see how the launch goes, but instead you're immediately put to creating a build machine user account for Steam, set up some build scripts, and made to wonder what you need a depot for.

Anyway, once you calm down and get the scripts and definitions up, it's a breeze. If you got your files set up properly on your side, getting an updated build to Steam for all the platforms takes one batch file to run, and you make it public with one click in the control panel.

Has the game been a success for you so far?


QuoteIt's been ok, but not quite the success we were hoping for. Hardest part has been trying to get the press and big youtubers to pick it up, so RWR is still in the dark for the most part.

What are your plans for the future of Running With Rifles?


QuoteWe'll finish with the rest of the content, a few maps, items, objectives, tweaks and fixes during the next 6 months, then we'll see how Steam launch goes through.

After that, there will be a few options what to do next, and it'll highly depend on how RWR does in Steam.

One option is to focus more on the multiplayer side of things, increase support for clans, leaderboards, stuff like that.

Yet another idea is to try how well the single player part of RWR ports to iPad and tablets in general.

We've also chatted about game title ideas that would be bigger projects than just DLC for RWR, but would still use RWR as a basis. We could go e.g. top-down medieval, or we could have more story-oriented single player game, or going multiplayer-only.

How do you feel about SteamOS?


QuoteNo feelings really, at least I'm not getting that game-changer feel from it; the news about it have mostly gone unnoticed to me so far.

Any plans for controller support for big-screen play?


QuoteI'm personally playing (and developing btw) RWR on a 52" TV from a couch and it plays great already :P Playing RWR on a gamepad would seem odd because of the aiming, but some people have actually tried mouse emulation with a gamepad and they said RWR wasn't that bad that way. It would work better if the game was simplified with assisted aiming, but it wouldn't be the same game anymore. PC gaming with pads is still a bit niche in my point of view so I wouldn't quite yet make that as a development focus area.

Any plans for split-screen for big-screen play?


QuoteNot really. You'd need several keyboards and mice and we all know that's even less likely than the gamepads on PC :P

I would like to thank Pasi Kainiemi for having a chat and I seriously think you will love RWR if you haven't tried it already.

We do often include affiliate links to earn us some pennies. We are currently affiliated with GOG and Humble Store. See more here.
About the author - Liam Dawe
I am the owner of GamingOnLinux. After discovering Linux back in the days of Mandrake in 2003, I constantly came back to check on the progress of Linux until Ubuntu appeared on the scene and it helped me to really love it. You can reach me easily by emailing GamingOnLinux directly.
See more from me
Some you may have missed, popular articles from the last month:
The comments on this article are closed.
3 comments
jdub 9 Apr, 2014
I love this game, my only issue with it is the lack of multimonitor support, and with windowed mode the mouse goes bonkers
0 Likes
TwiXter 9 Apr, 2014
Great game. I am playing it since a while now and I am still not sick of it. Also huge modding potential (I am not a modder myself though).
0 Likes

View PC info
pasik is the coolest dev ever. Go all buy his game NOW!
0 Likes
While you're here, please consider supporting GamingOnLinux on: