Guess The Next Linux Port From Feral Interactive, And Win A Copy 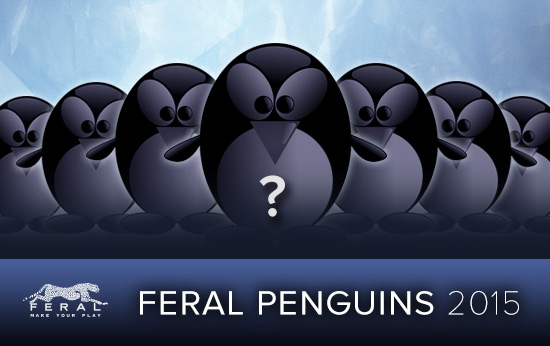 We have teamed up with Feral Interactive, who ported XCOM: Enemy Unknown and Empire: Total War to Linux, to bring you a fantastic new competition! Simply guess their next Linux port, and you could win a downloadable copy when it is released!

We are calling this "Operation Feral Penguins"!

Rules & Information
Utilise your tux telepathy (yes, that’s a thing) to guess the title of the first game Feral Interactive is going to bring to Linux in 2015.

The single winner will be selected from everyone who guesses correctly before the deadline.

The winner will not be announced until the game itself is announced, which will be early 2015. As the competition runs until mid-January, the announcement date shouldn't be too far after, so you won't have to wait long at all.

Now, begin the guessing game, my little army of feral penguins! Fear not though, for I your penguin king am not in this competition for absolute fairness, and I don't even know what it is! Article taken from GamingOnLinux.com.
Tags: Competition, Upcoming
0 Likes
Share

We do often include affiliate links to earn us some pennies. We are currently affiliated with GOG and Humble Store. See more here.
About the author - Liam Dawe
I am the owner of GamingOnLinux. After discovering Linux back in the days of Mandrake in 2003, I constantly came back to check on the progress of Linux until Ubuntu appeared on the scene and it helped me to really love it. You can reach me easily by emailing GamingOnLinux directly.
See more from me
Some you may have missed, popular articles from the last month:
The comments on this article are closed.
133 comments
Page: «13/14»

View PC info
There's been a game called Scorched Earth 20 years ago. I doubt they'll port it from DOS to MacOS and Linux, though.
0 Likes

Quoting: fleskThe latest hint on the radar makes me think it's LEGO Marvel Super Heroes, as both the image of a (presumably) iron fist and the phrase "Scorched Earth" are Marvel references.

Problem with that is, the clue is for Linux and OS X and sadly LEGO Marvel Super Heroes is already out for OS X.

Yeah, I didn't realize that until after I'd written that yesterday. :( Could still be that there's upcoming DLC for the game that will be available for both Linux and OS X, but I think chances are slim, since, as far as I know, there hasn't been DLC for any of the previous LEGO games.
0 Likes
dulbirakan 14 Jan, 2015
Total War: Rome 2 (It has an emperor edition...)
0 Likes

View PC info
My guess would be Company of Heroes 2.