Fans of the previous Shadowrun games have flocked like mad sheep to the new Shadowrun: Hong Kong Kickstarter, so this is most likely going to be funded. 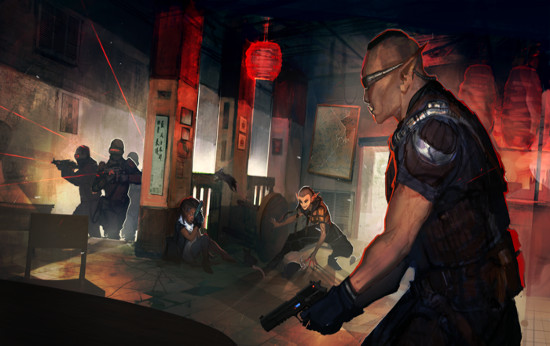 HONG KONG. A stable and prosperous port of call in a sea of chaos, warfare, and political turmoil. The Hong Kong Free Enterprise Zone is a land of contradictions - it is one of the most successful centers of business in the Sixth World, and home to one of the world’s most dangerous sprawl sites. A land of bright lights, gleaming towers, and restless spirits where life is cheap and everything is for sale.

The lure of a quick payday draws you from Seattle into the neon glow of Victoria Harbor… and into a corporate conspiracy nearly thirty years in the making. A terrifying threat looms on the horizon - a supernatural force that corrupts and consumes everything it touches. Dragged into the shadows of Kowloon City, you will need to forge new connections and gain "face" to survive.

Hong Kong contains fantastic elements for a new Shadowrun setting: an underworld of triads, tongs, and gangs to navigate, wild magic to harness, and bleeding edge cybertech to equip. Plus, Hong Kong’s culture is steeped in "guanxi" - a network of influence and relationships based upon a combination of social status, and prestige. All of these elements add up to a great new setting for running the shadows.

There will be no tablet version, so it's taking full advantage of PC. That's what I like to hear!

At time of writing it's verrrrrry close to hitting the initial target (quick check, oh it's funded), so I don't think we have any worries. The best thing is that Linux is supported as standard.

We never suggest backing anything on Kickstarter nowadays, but when it is already funded, and they have a good track record...maybe.

I should really play through Returns and Dragonfall now...

View PC info
Haven't played Dragonfall yet but the base SR game was really good. Looking forward to this one.

That's a bit of a shame that there will be no tablet version as though I play on PC (Linux, of course), it was nice for tablet players to have this kind of game. And the devs already have the base engine, I don't think there would be so much work to port that new extension (or maybe the tablet version of the base game sucked and they don't think it's worth doing more work on it?).
0 Likes

Quoting: abelthorneI don't think there would be so much work to port that new extension

They said that they wanted to add more shiny to the PC version instead of being constrained by what they can reasonably do on a mobile device.
0 Likes

View PC info
i loved the first two games and im looking forward to this one :)
0 Likes

View PC info
Played dragonfall over Christmas and it was great. If this is more of the same then it will be worth it.
0 Likes
FutureSuture 14 Jan, 2015

View PC info
So is Shadowrun Returns necessary or can a curious gamer just buy and jump straight into Shadowrun: Dragonfall?
0 Likes

View PC info
You can just jump straight into Dragonfall. Apart from a few NPC that cameo in Dragonfall, there's not much overlap between Dead Man's Switch and Dragonfall.
0 Likes

So this time I backed the new project up, not only because I'm really looking forward for a new Shadowrun story/game, but also to give a little back from what I've saved when I bought the other games on sales.
1 Likes, Who?
1/2»
While you're here, please consider supporting GamingOnLinux on: