Get Brick-breaker Grey Cubes For Real Cheap, Plus Initial Thoughts

Grey Cubes is a Breakout-style arcade game that was released last month. It is being featured right now on IndieGameStand's Pay-What-You-Want deal and it will still be available for the next two days.

I happen to hold Arkanoid in high regard as it was one of the first games I played as a kid, so I basically got Grey Cubes because it promised to be a modern variation on the classic formula of the genre, with real-time physics and 3D gameplay. I must confess I picked it up a little reluctantly, as we all know what these redefinitions-of-a-genre type of games tend to be, and because the screenshots and the trailer didn't forebode anything spectacular.

And boy, how wrong I was! I launched it to see if it worked. I played the first level, then the second, then the third... and I couldn't stop until the 30th, out of the total of 60 levels Grey Cubes has to offer. It is indeed a true improvement on the breakout recipe with the introduction of realistic physics: e.g. when hitting a block the ball bounces off depending on the orientation of said block and in turn the block gets pushed back a little, balls can collide with each other, or the paddle is curved --giving at last a reasonable explanation as to why the ball rebounds at different angles depending on where it hits the paddle.

Physics alone doesn't make Grey Cubes the interesting gem it is, though. There are a lot of new mechanics and gimmicks that radically change the way you play: a truly 3D environment, invisible or explosive blocks, teleporters for the balls, bouncy walls at different angles, or dual-paddle levels in which you've got to cover both the bottom and the top sides of the screen, are only some examples. But the cherry on the cake is the level design: far from restricting themselves to putting a bunch of blocks in a certain pattern the devs have achieved to create dynamic levels, in which blocks can literally fall from the sky, or be inaccessible behind a movable barrier you first have to activate in order to get to them, or gravity (or the level slope, more likely) changes alternatively causing the blocks to move from one side of the screen to the other. 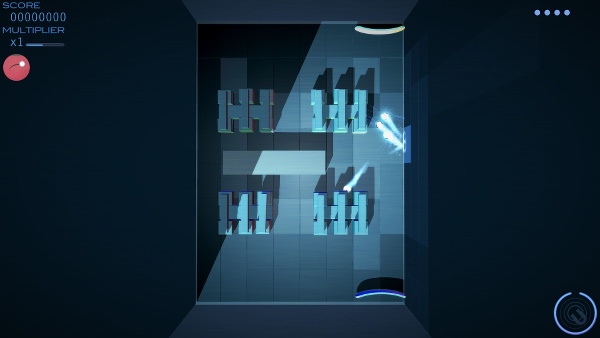 The usual power-ups are present in Grey Cubes, from the usual enlarge/reduce the paddle or the glue-the-ball-to-the-paddle ones, to some more unusual like this one which causes the balls to randomly curve their trajectory as they go along (ragequits guaranteed if they happen to turn just before hitting your paddle!). In addition to those, there's yet another special power, which needs to be charged, that kind of magnetizes the ball so it goes straight to the closest brick. A very powerful weapon indeed, although after having played half the levels in the game, I still haven't figured out just how exactly does it get charged.

Controls are tight enough, either with a gamepad or the keyboard, but I highly recommend using the mouse for the best control and accuracy. Except if you find the game too easy with the mouse, in which case you can resort to other input methods as an artificial way of increasing the difficulty. I do find it a little on the easy side, but to be fair in most levels the real challenge is not to complete them but to beat your previous high score. To that end, you must be sure to keep a steady brick-breaking cadence, or else your combo multiplier will slowly decrease to nil.

My main complaint about this game would be the graphics, though. I'm not referring to its highly minimalistic design, which I think serves its purpose pretty well. I'm talking about graphical detail, or lack thereof: the graphics look horribly aliased, so much that I had to check if the game was picking my full monitor resolution. Fat chance looking in the settings menu: it only allows you to turn on and off the music and/or the sound effects. I finally had to fiddle with the Unity config files to confirm that the game was indeed running at 1080p. (Later on I found out the pause menu allows you to choose between 4 different graphic quality presets, but still no resolution, AA, V-sync, or similar options are nowhere to be found in-game). But in all fairness this lack of graphical polish is only a minor inconvenience, and one that I stopped paying attention to after a couple of minutes of play session. As stated above the meat of Grey Cubes is its gameplay and its level design, which to me and many others is what it matters at the end of the day.


About the game (Steam)

Grey Cubes is a modern variation on the brick-breaker-type game, based on real-time physics and three-dimensional gameplay (not just 3d look).

Minimalist in style, with clean graphics and deep, original soundtrack.

The game contains 60 levels, each one is unique, each one with new challenges.


Grey Cubes is available on Steam and DRM-free (along with a Steam key) on the IndieGameStand store, but for the time being you can get it dirt cheap with IndieGameStand's deal of the day: pay what you want for a DRM-free download, a minimum of $1 for a Steam key, or beat the average to get the soundtrack as well. Go get it before it's too late! Article taken from GamingOnLinux.com.
Tags: Arcade, DRM-Free, IndieGameStand, Initial Thoughts, Steam
0 Likes
We do often include affiliate links to earn us some pennies. We are currently affiliated with GOG and Humble Store. See more here.
About the author - muntdefems
A Linux user for more than 15 years, I've just recently rediscovered the passion for gaming. Couldn't have chosen a better time than now: the [second](http://www.gamingonlinux.com/articles/linux-techdemo-available-for-race-the-sun-.1752#4850) Golden Age of Linux gaming.
See more from me
Some you may have missed, popular articles from the last month:
The comments on this article are closed.
5 comments

Alzarath 9 Jun, 2015
View PC info
Picked this up a couple days ago. Along with the lack of options (missing volume control being especially damaging for me), I felt the negative powerups were a little annoying compared to similar games that I'm used to. Usually they'd offer at least some points, so they might feel worthwhile to get, but that's not the case here. They're not especially hurtful, at least not to the extent that I felt I could ever attribute a death to them, and for some reason they home in on your paddle, so at worst they're a mild unavoidable nuisance.

I usually like this kind of game, but sadly it got a bit slow and repetetive after a short time.
0 Likes

View PC info
Bought it, played it, loved it :)
0 Likes

You're right when you say the screenshots and the trailer don't forebode anything spectacular, but I will give it a second chance because of your article. Thank you.
0 Likes

Quoting: AlzarathI felt the negative powerups were a little annoying compared to similar games that I'm used to. Usually they'd offer at least some points, so they might feel worthwhile to get, but that's not the case here. They're not especially hurtful, at least not to the extent that I felt I could ever attribute a death to them, and for some reason they home in on your paddle, so at worst they're a mild unavoidable nuisance.

Yeah, that also irritates me a little. :P
0 Likes

View PC info
Thanks for the write-up. :) Looks interesting.

Fans of this genre might also be interested to know that Wizorb has been re-ported by flibitijibibo and is now available on Steam (I think it was originally ported with MonoGame for HIB6 a couple of years ago).
0 Likes
While you're here, please consider supporting GamingOnLinux on: