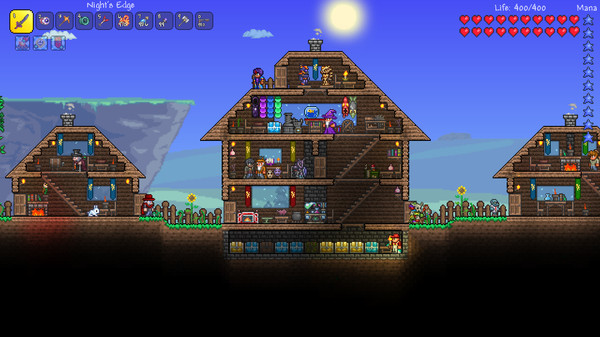 Quoting: Eike"Beta" should IMHO be a part of the title...

Oh my, that got cut off, sorry about that. It was in my draft, I'm blaming gdocs again.
2 Likes, Who?

View PC info
Looks like Starbound skinned for high fantasy. First, we see a bunch of Minecraft knock-offs, now people are doing the same thing in 2d? WHY?

Because it sells.
0 Likes
Mambo 22 Jul, 2015
View PC info
Terraria was first; but Starbound was multiplatform from the start.
Aside from the fact that Starbound is in early access and very active development, which one should I play?

Now that is great news. I am so excited!!!
0 Likes

View PC info
Mambo: It's up to you if you like space theme with planets, aliens, spaceships, OR fantasy, more "minecrafty" game. I recommend Starbound, but whatever :D
0 Likes

View PC info
Excellent. Sadly I already bought this ages ago so can't register a Linux sale. Could gift I guess but whilst can purchase on Linux, if I gift it'll probably be played on windows.
0 Likes
Fornax 22 Jul, 2015
View PC info
It's about time, been waiting for years!
0 Likes
1/4»
While you're here, please consider supporting GamingOnLinux on: