The Journey Down On Kickstarter, Funding Final Chapter Of Point-And-Click Trilogy

SkyGoblin has launched their Kickstarter campaign to fund the third and final chapter of the popular afro-noir point-and-click saga and are off to a good start. With story and design already in place, they are ready to dive into full production of the game, but need funding to create the grand finale they have envisioned for their modern classic. 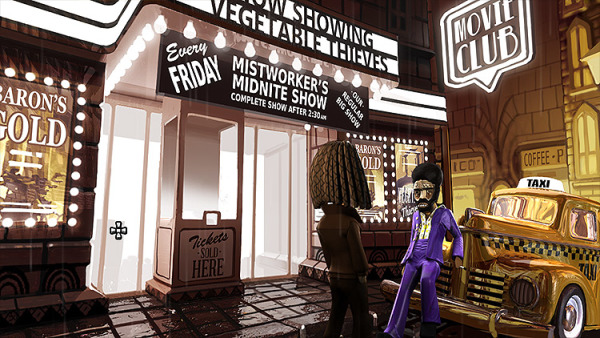 In the first two chapters, Bwana and his sidekick Kito go from struggling to make ends meet to setting out on a dangerous journey in search of the fabled Underland. Like the LucasArts games it was inspired by, The Journey Down strikes a good balance between story and puzzles, and is a game well worth playing for longtime fans of the genre.

To help fund production of chapter three, SkyGoblin is aiming for a modest kr 300k SEK goal, which is roughly $35k USD. This amount alone isn't enough to cover the cost of development and additional expenses like voice acting and music, but they've already covered most of the costs themselves with contract work and money from sales of the two first chapters. The campaign has barely been live for a day, but has already reached one third of its goal, which is a testament to how popular the previous instalments are. If you already own the first two chapters, you can get a copy of the third on release by pledging kr 90 (~$11). Note that the DVD that is part of some of the higher tiers only comes with Windows and Mac versions, judging by the description on the campaign page.

The first chapters are available on the Humble Store and Steam, and if you want more, you can back The Journey Down on Kickstarter.

View PC info
I'm very happy to be onboard with this one. I really hope Theo, Henrik and Mathias get the support they need :D
3 Likes, Who?

Eike 2 Oct, 2015
View PC info
It's a great game, check out chapter 1 and 2 if you like point and click!
This is my first kickstarting.

View PC info
I really hope this awesome series gets the ending it deserves. The first two games are wonderfully atmospheric and imaginative, with gameplay easily up there with the classics of the point-and-click adventure genre. I won't kickstart the game but I will definitely buy it.
1 Likes, Who?

Chapter 1 was great... chapter 2, not so great... unfinished and unpolished everywhere...
0 Likes

Quoting: aLChapter 1 was great... chapter 2, not so great... unfinished and unpolished everywhere...

I found chapter 2 to be better and for sure more polished than chapter 1.
Chapter 1 even had some voice recordings with wrong voice AFAIR, at least not matching at all.
But both are great IMHO!
1 Likes, Who?

Segata Sanshiro 2 Oct, 2015
View PC info
Oh nice! Not really too in favour of Kickstarter nowadays, but really want to finish of this adventure since the first two chapters were fantastic and know these guys can deliver. Will be backing this ASAP :)

Thanks for publishing this Flesk! Would have had no idea about it if I hadn't seen this.

Quoting: aLChapter 1 was great... chapter 2, not so great... unfinished and unpolished everywhere...

I found chapter 2 to be better and for sure more polished than chapter 1.
Chapter 1 even had some voice recordings with wrong voice AFAIR, at least not matching at all.
But both are great IMHO!

I liked both but 2 is my favorite too. If I remember correctly, 1 initially had some issues with the voice recordings being of very low quality. I think they re-recorded several of them later. 2 was very solid overall, in my opinion, with a great story and puzzles that were well integrated into the game.

Quoting: Segata SanshiroThanks for publishing this Flesk! Would have had no idea about it if I hadn't seen this.

View PC info
1 and 2 were good, can't wait for chapter 3!
0 Likes
While you're here, please consider supporting GamingOnLinux on: