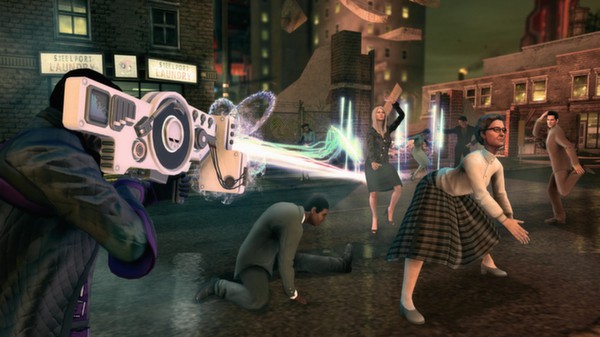 Oh baby! Saints Row IV is now available on SteamOS and Linux, and I can't wait to give this insane game a go. It's part of a very small selection of open world games available on Linux, so I hope it does well.

We will have thoughts up on it later, as we had no advanced warning or access.

In the ~1 hour I've put into it so far, I haven't had a single crash, so that's really great news.

Nvidia 980ti at 2560x1440 on Ultra
40-60FPS, It seems mostly smooth, I've seen maybe 2-3 minor stutters in my testing of it. It hovered mostly around 50 and just under with these settings after playing the entire prologue.

Nvidia 980ti at 1920x1080 on Medium
Seems to hold a much more respectable performance setting when at Medium. I'm seeing at least 60FPS now, but that's quite concerning given how powerful my GPU is.

After testing it on all settings, there is momentary stutter no matter what settings you have. Not sure of the cause, but it doesn't get in the way too much anyway.

It feels like it has a pretty small FOV, so it feels a lot like Mordor where you can't really see all that much.

I haven't been able to play a lot of it for obvious reasons, but I think the most time I have spent on a single part of it was creating my damn character. I love being able to adjust build, colour, sex appeal, eye-shadow...wait what? Yeah, my character looks a bit...funky. You can also adjust the pitch of their voice, hilarious.

Final notes/thoughts: I think their minimum listed specifications are far too low. The port needs work to iron out the random stutter, and you will probably need a pretty good GPU to go Medium or above on the settings even at 1080p.

I am quite disappointed with the performance. I mean it's perfectly playable for me, but I have a monster of a computer right now. It wouldn't be as bad if the random stutter was fixed, then in all honesty if you turned off the FPS counter you probably wouldn't be able to tell much.

As for the game itself, it does seem like a game that I will put some time into and enjoy it, so overall I am personally happy with it. I love these types of games, and I have a great PC so it's okay for me, but I do worry about performance for those on a weaker GPU.

The main thing is as always: Are you having fun? I am.

It also went on a big sale right after I purchased it *sigh*.

About the game (Official)
The US President must save the Earth from alien overlord Zinyak using an arsenal of superpowers and strange weapons in the wildest open world game ever.

The epic conclusion to the game that changed all the rules! The Saints have gone from the crackhouse to the White House—but the Earth has been invaded and it’s up to you to free the world from Overlord Zinyak and his alien empire. With homies new and old by your side, and an arsenal of superpowers and strange weapons, you must save the world in the wildest open world game ever!

I am the owner of GamingOnLinux. After discovering Linux back in the days of Mandrake in 2003, I constantly came back to check on the progress of Linux until Ubuntu appeared on the scene and it helped me to really love it. You can reach me easily by emailing GamingOnLinux directly.
See more from me
Some you may have missed, popular articles from the last month:
The comments on this article are closed.
76 comments
Page: «2/8»

View PC info
Runs slow with a Radeon 7950, Catalyst 15.11, at the rather low standard settings 1280x960.
Graphical corruptions on character polygon edges are present.
Even the scroll text in the menu stutters.
0 Likes

View PC info
I have to say, performance is disappointing, and I am on an Nvidia 980ti one of the best you can get.

Added some thoughts into the article.

Quoting: TheBossI have to say, performance is disappointing, and I am on an Nvidia 980ti one of the best you can get.

Added some thoughts into the article.

You do like to brag about that graphics card :)
5 Likes, Who?

However looks like Windows performance is not that good too, if I refer to the comments.

How it works:
At first launch the game automatically selected 720p with medium detail graphics. After the intro (the one done with the in game engine), the game presented a black screen: you can move, but everything was black. Tried to change resolution or graphics detail, nothing changed.
I restarted the game and set resolution to FullHD and High graphics details: everything worked flawlessy, I played the tutorial and the first mission without problems. The framerate wasn't constant, the experience was worse than on Windows on the same machine, but the game was playable.

QuoteSome games don't like using the right thumbpad as mouse

There is a special mode called Joystick Mouse (or Mouse Joystick, I forget) which was added more recently to get around issues with games that don't like standard Mouse mode alongside other gamepad controls. It works well, considering, but you need to use in-game sensitivity options to tweak it further.
0 Likes

QuoteSome games don't like using the right thumbpad as mouse

There is a special mode called Joystick Mouse (or Mouse Joystick, I forget) which was added more recently to get around issues with games that don't like standard Mouse mode alongside other gamepad controls. It works well, considering, but you need to use in-game sensitivity options to tweak it further.

Some games like Shadow of Mordor don't like that mode either, as it still messes things up.
0 Likes

View PC info
I'm getting framerate drops on my 970. I even have it installed on my solid state drive, still not a constant framerate.
0 Likes