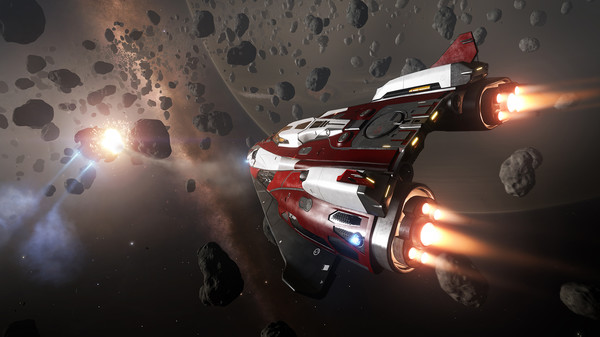 This one is quite vague, but a new job posting may suggest that a Linux port of Elite: Dangerous isn't out of the question.

Usually, I would put this down to servers and not give it another thought. My interest here is specifically about deployment and mentioning Linux along with existing versions. They also have a totally seperate job listing related to Servers, so that has also boosted my interest in this.

Of course, I am speculating here, but it's fun to do now and then about bigger titles. It seems like a rather sought-after title too, with a single SteamOS/Linux post on the Steam forum having 29 pages of people talking about it.

About the game (Official)
Elite: Dangerous is the definitive massively multiplayer space epic, bringing gaming’s original open world adventure to the modern generation with a connected galaxy, evolving narrative and the entirety of the Milky Way re-created at its full galactic proportions.

Starting with only a small starship and a few credits, players do whatever it takes to earn the skill, knowledge, wealth and power to survive in a futuristic cutthroat galaxy and to stand among the ranks of the iconic Elite. In an age of galactic superpowers and interstellar war, every player’s story influences the unique connected gaming experience and handcrafted evolving narrative. Governments fall, battles are lost and won, and humanity’s frontier is reshaped, all by players’ actions.

We do often include affiliate links to earn us some pennies. We are currently affiliated with GOG and Humble Store. See more here.
About the author - Liam Dawe
I am the owner of GamingOnLinux. After discovering Linux back in the days of Mandrake in 2003, I constantly came back to check on the progress of Linux until Ubuntu appeared on the scene and it helped me to really love it. You can reach me easily by emailing GamingOnLinux directly.
See more from me
Some you may have missed, popular articles from the last month:
The comments on this article are closed.
27 comments
Page: «2/3»

View PC info
I've been waiting on a Linux port of this for a long time. Bought Star Citizen as at least Chris has said on multiple occasions that he wants to support linux (sounds like Vulkan, he wasn't happy with Crytek's OpenGL perf). I was hoping ED could hold me over for a bit but they haven't even confirmed that they were working on a Linux build...

If anything, given the latest expansion was $45 for existing owners I'm glad I waited.
0 Likes

View PC info
The Elite messages boards have tons of Linux requests going way back. The theory has been that they would work on it after the xbox version was out. Since you can't run this on a dedicated server, the only reason to hire someone that specifically knows how to write platform independent code would be for the client, right?

https://forums.frontier.co.uk/showthread.php?t=2920
2 Likes, Who?
mao_dze_dun 22 Dec, 2015
Maybe they are just hiring somebody to fiddle around and give them an estimate (quote if you're British :P) on how much time and manpower it would take. Then they can decide whether or not to actually begin the process of porting and at what pace. So, my guess is that programmer will basically be the guy that tells you how much fixing your roof would cost and not the one the actually does it.
Also, don't forget they probably want to have at least a very, very, very rough idea of performance. While in general, the game is not that taxing on Windows, because it's just little dots on a black background for the most of it, scenes with a high number of ships can in fact tank the FPS quite a bit.
0 Likes

autonomouse 22 Dec, 2015
View PC info
I backed the kickstarter for this and bought the lifetime expansion, because I was a fan of the earlier games and, well, a lifetime is a long period of time in which to get a lnux port out. I just hope people don't abandon the game before it gets into my hands. I've heard lots of people compaining about it, but they probably never played the original (or maybe they were nostalgia-fuelled fanboys like me who were disappointed that it didn't live up to the hype... hope not...). I couldn't really care less about the online component - I'd just quite like to zoom around the galaxy like I remember from Frontier.

I actually expect them to push out the PS4 release first, but sooner or later it'll come to linux/SteamOS - I think VR was an afterthought for them originally, but now they've seen the way it's going for VR and how their customers go on about it - I think that this is why they unexpectedly made the move onto Steam (which I think David Braben said way back when that it wasn't in their original plans either). So, it would make sense to get onto Valve's platform of choice not too long after the HTC Vive comes out, right?

Anyway, I'm also the one who stumbled across the job posting and put it on reddit. This is flimsiest of evidence, but I read in an interview where Braben was shouting about the virtues of the COBRA engine and how it wouldn't take much to port it to Linux if they wanted to, so maybe they only need one guy part-time to do it?
2 Likes, Who?

View PC info
I am annoyed that they are taking so long for a linux release. Braben did mention it in the kickstarter page which inticed me to back it. He's more likely to do it after PS4. The thing is they already have released it on mac, surely it isn't much more work to release on linux?
Anyway the game was a bit disappointing (I have played the windows version). It felt like it was released too soon.
Furthermore, they are rushing to release more expansions for the game when they should really be improving the original release, and I am saying this as a lifelong fan of the elite games.
0 Likes

autonomouse 22 Dec, 2015
View PC info
Actually, I can't blame him for that one. When begging for cash on Kickstarter, it's easy to promise the world (*cough* Peter Molyneux *cough*), but he went out of his way to *not* say that they would bring it out for Linux. As you mention, there was the "What about linux/raspberry pi/other platforms" in the FAQ but that only didn't rule out the possibility in future and nothing definate was promised, so his integrity is intact :-D

I guess with his work with the RPi foundation, I was kind of hoping he might be a linux fan, but apparently when asked directly in the past, he has shrugged it off and said "Why don't you just buy a Mac" or something similar. Still, that doesn't mean anything and he did do that interview with TuxRadar fairly early on, so I guess when the business case for doing it is there, I'm sure they will.

What's annoying me is that I got some of my friends to back it, who are enjoying themselves playing it now, while I'm being a purist and haven't touched it yet :-(
1 Likes, Who?

View PC info
Very promising indeed. I agree, it doesn't look like a server coder. And especially if the game already is out for osX then a lot of the ground work is already done.
0 Likes

View PC info
OMG! :O
This is really the only reason Im still playing game on windows.
I really hope this happens!

And they never said no to linux.
Here is an old interview with Braben http://www.tuxradar.com/content/interview-david-braben-0
The brains behinde ED.

Also Frontier seems to work closly with valve with the HTC vive headset.
They also made Elite work with xbox controller when they launched ED for xbox.
So you can use an xbox controller on the pc version now.

It seems just easyer and cheaper for Frontier to support Linux, steamOs for the consol experince and Linux for the desktop experience.

I really hope they will port ED.
0 Likes

Quoting: BeamboomVery promising indeed. I agree, it doesn't look like a server coder. And especially if the game already is out for osX then a lot of the ground work is already done.

But it will not get a future update, like the one they just released, Elite Dangerous horizon.
But yes, the engien or the game can run on Linux aswell.

Pecisk 22 Dec, 2015
View PC info
Recent AMA on reddit David said it is not in the plans at the moment. They use Linux for servers. Obviosly they want to see more concrete strides of Steam Machine and some market solidification before comitting - they are small company and don't have money to waste. Issue is that OS X version is also stuck at base game due of Apple not supporting OpenGL beyond 4.1 (FD needs 4.3 with compute shaders for Horizons which contains planetary landings).

So it is worth to *keep* asking, however they will do it only a bit certain they will get money back.