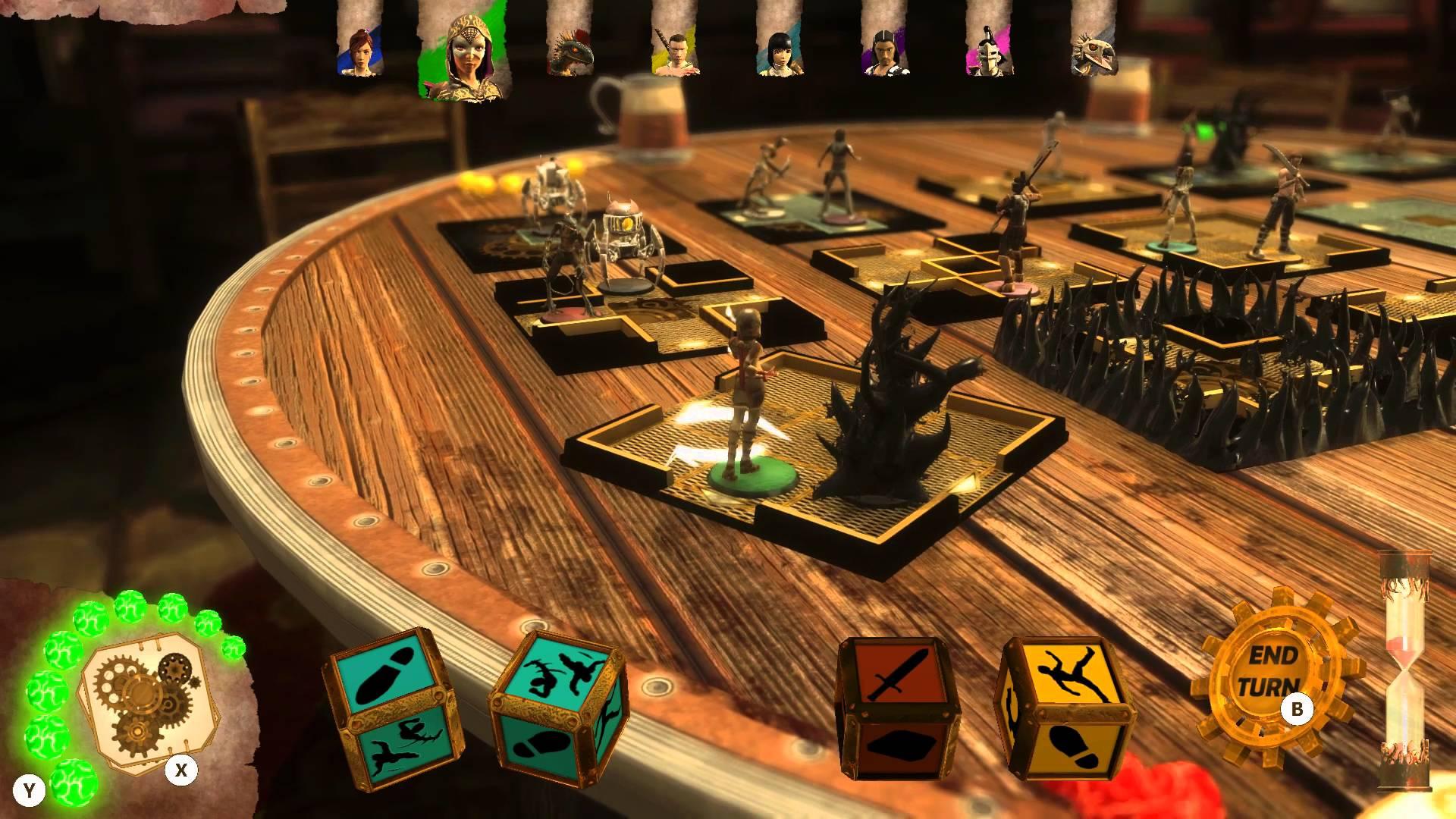 You can find the post on Steam here, so if it looks like a game you would buy and play on Linux be sure to let them know.

Looks like something that could be pretty fun to play with a few of you on a livestream.

About the game
Bring the excitement of playing a tactical dungeon tournament game to your screen, in beautiful gruesome detail. There really is nothing quite like The Living Dungeon.
Up to 9 players can take part in a battle of wits, luck, and skulduggery. Survive other adventurers, monsters, and the dungeon itself through combat, agility or dungeon manipulation. Only the strongest, fastest and smartest survive.

Each player has only 5 actions per turn. They then have only 2 fretful minutes to decide what to do with those 5 actions. Panic will set in. The possibilities and threats will become overwhelming. Your mind will freeze up! Your time is running out for you to complete your objective, but one wrong move could be fatal! There are just so many ways to die in The Living Dungeon.

Thanks for pointing it out Luke. Article taken from GamingOnLinux.com.
Tags: Adventure, Steam, Strategy
0 Likes
We do often include affiliate links to earn us some pennies. We are currently affiliated with GOG, Humble Store and Paradox Interactive. See more here.
About the author - Liam Dawe

View PC info
I would definitely buy and play this.
0 Likes

View PC info
This does look rather nice. A thirty-hour story campaign as well. I wonder if it's all about the RNG though. That could kill the enjoyment for me, like it did with Hand of Fate. Some of the Steam reviews seem to suggest that's the case.
0 Likes

View PC info
I did my part and commented. Hopefully something comes of it.
0 Likes

Mountain Man 23 Jul, 2016
View PC info
Why do developers bother with even asking? There are millions of people playing games on Linux, so of course there's interest in a Linux version. Why wouldn't there be? It's not like "Linux gamer" is a monolithic subset of the gaming community. It makes as much sense as asking, "Is there interest in a Windows version?"

Whenever I see a developer ask this, it tells me they're really not vested in Linux and are looking for an excuse not to support it (i.e. "We didn't get enough positive response to our thread." ).

View PC info
He should just calculate a 0.5-2% additional sale from whatever his current sales are and consider if it's worth it or not from that. That's where it likely will end up.
0 Likes

Quoting: Mountain ManWhy do developers bother with even asking? ... It's not like "Linux gamer" is a monolithic subset of the gaming community.

That's exactly my thought. Although I do get why are they doing it. If they never did anything Linux, are not familiar with the community, but would really like to do it, maybe a little encouragement is all they need? Or maybe the suits want to see some evidence that Linux gamers are not a myth? We need to assume that they are asking because they care, not because they are looking for excuses.
2 Likes, Who?

View PC info
I just wish Valve gave incentives to game devs who make a Linux port. Like instead of taking a 30% cut of every sale, they take a 10% cut of every Linux sale. Hypothetical, I have no idea what the real percentages are. Valve could make it a time limited thing, and keep advertising it to devs and re-upping at their discretion: "Extended for six more months: 75% off our cut per sale of any fully ported Linux Steam game! Time is limited, so act now!"

But, Valve wouldn't want to take that kind of hit to their pocketbook just to push Linux adoption forward. Greed is what greed is.

Quoting: HalifaxI just wish Valve gave incentives to game devs who make a Linux port. Like instead of taking a 30% cut of every sale, they take a 10% cut of every Linux sale. Hypothetical, I have no idea what the real percentages are. Valve could make it a time limited thing, and keep advertising it to devs and re-upping at their discretion: "Extended for six more months: 75% off our cut per sale of any fully ported Linux Steam game! Time is limited, so act now!"

But, Valve wouldn't want to take that kind of hit to their pocketbook just to push Linux adoption forward. Greed is what greed is.

I think it's a little more complicated than that. Companies offer discounts all the time--like the numerous sales on Steam itself. Valve could be offering such an incentive right now and I wouldn't know. You admitted you don't know what the real percentages are either, so I imagine you're in the same boat. Even assuming they're not, the reason they're not could simply boil down to something they've never really considered.

I do think Valve could push to support SteamOS more, and even make some sacrifices along the way, but it really comes down to cost-to-benefit. The great thing about capitalism is that "greed" as you put it motivates companies to generate value for society in order to exchange it for value in return. (As opposed to government which satisfies its insatiable lust for resources simply by force.) So, they could figure that if they made some deals now and took some cuts in the short term, it could pay off in the future with their own entrenched platform and whatever profit opportunities that presents.

The problem is I think SteamOS has always been a bit of a contingency plan. It's a fallback should Microsoft ever try to place some limits on Valve by forcing developers to use the Windows store or other like shenanigans that MS might pull with their OS that cuts into Valve's potential profits. At this point, I think Valve has essentially called MS's bluff and MS in turn has backed off. Accordingly, they can keep SteamOS in stasis as long as they like, ready to drag it back into the light should MS start making any moves again that Valve doesn't like.

In a way, it's a bit of a nuclear option. The biggest thing Valve could do to support SteamOS is to release some kind of exclusives (timed or otherwise) for SteamOS and/or subsidize their console like Microsoft and Sony does, selling the system at or below cost on a gamble to drive adoption. Their talk of exclusives violating the "spirit" of things or whatever is a load of BS. Developing for one platform over another has costs--as plenty of devs will tell you when you ask about a Linux version. Accordingly, if Valve encouraged/paid a developer to make a game for their platform in a very standard limited-time non-compete agreement for a few months or at the very least released a game or two themselves as some kind of exclusive, there's nothing more immoral about that than the DRM restrictions they facilitate all the time with Steam itself. Likewise, actually producing Steam machines directly rather than offering immaterial support to third-party vendors--leaving them to sell their systems at a premium on par with any other prebuilt PC in order to turn a profit--likewise demonstrates Valve's lack of commitment to really turning the industry around to support their own platform.

And it all makes sense when we consider that Valve isn't really trying to shake things up this way. It would irritate some existing "PC" gamers to think that they have to wait for, say, Half-Life 3 to come to "PC" or go out and purchase a Steam machine. But the outcry would be minimal, and plenty of gamers would begrudgingly purchase yet another console like they have in the past should they really be unwilling to wait, and the outcry from the community and all of its empty threats and other assorted drama would pale in comparison to the bigger concern: Microsoft's response. Should Valve make the first move and truly give people incentive to abandon Microsoft's flagship OS--especially in a time when MS is failing in other markets, such as mobile--then you can bet Microsoft would definitely tighten the reins and enforce some policy that would push Valve off their OS entirely.

Neither company is short-sighted enough to violate their own interests, and so there remains a stalemate. At some point--maybe if more than 50% of Steam's library was available on SteamOS (random guess really)--perhaps Valve might consider parting ways with MS and actively pushing for folks to adopt their platform. But whatever the case is that precipitates such a departure, make no mistake: it would be a departure. Valve is only really going to push SteamOS with any kind of real weight once they're comfortable with any kind of retaliation from Microsoft.
0 Likes
While you're here, please consider supporting GamingOnLinux on: