Putt-Putt Goes to the Moon, an excellent Linux & SteamOS game for kids

Today was another typical British summers day (rain), so I decided to pick up Putt-Putt Goes to the Moon and it has impressed me. 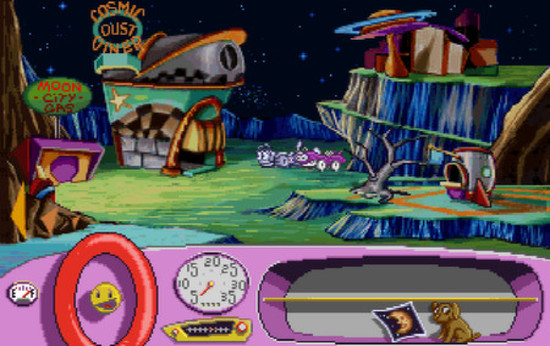 I am always iffy about letting my son play games for some reason, partially due to the views of other parents I am around and how poorly they look at video games. Today I thought “screw it”. I personally see nothing wrong with them, as long as they are age appropriate.

I picked up Putt-Putt Goes to the Moon which is the first point and click adventure game my son has ever played. Initially I though the interface would be confusing, but much to my surprise it’s actually relatively simple even for a young child's mind to grasp.

It's a sweet and simple little point & click game where you play as a car called Putt-Putt and you accidentally have a trip into space. It has some really fun activities for kids clicking on random objects and seeing what happens, small puzzles like a maze to find your way through and so on. Watching my son quickly pick up how to navigate the maze by pointing the cursor in different directions was incredible.

My son was able to easily recognise when the cursor changed to indicate he was able to interact with people or objects, so it’s actually quite well designed.

One thing I would say for sure, is to stay with them to play it with them. Being involved with the game and the whole activity was a bit of a boost for us both as a bonding session. There are elements where they may get confused and need a little reminder on what they are doing.

This is why #SteamOS was made, Putt Putt on a rainy say with the #SteamController! pic.twitter.com/yoXEaFsJQ6

Of course, I meant "rainy day"—Twitter has no edit function.

What has impressed me is just how smoothly you can play such a game from the couch with a Steam Controller. We had zero issues with it and it made it a really great game for the living room experience. Yet another tick in the box for the Steam Controller for me!

If you’re a parent wanting to introduce games to your child I can easily recommend this game.

It has enabled my son to explore an entirely new world and figure out things for himself. Watching him learn, laugh and have a good time was really great for us both.

I have to admit I let off a few chuckles with my son while we were playing it together.

Article taken from GamingOnLinux.com.
Tags: Initial Thoughts, Point & Click, Steam
0 Likes
We do often include affiliate links to earn us some pennies. We are currently affiliated with GOG and Humble Store. See more here.
About the author - Liam Dawe

I am the owner of GamingOnLinux. After discovering Linux back in the days of Mandrake in 2003, I constantly came back to check on the progress of Linux until Ubuntu appeared on the scene and it helped me to really love it. You can reach me easily by emailing GamingOnLinux directly.
See more from me
Some you may have missed, popular articles from the last month:
The comments on this article are closed.
8 comments
Purple Pudding 20 Aug, 2016
Sometimes I think about the games of my childhood and how much I liked them... Most of the are easily playable on Wine or retrogaming programs today, some are even released on Linux (GOG recently did that with 3 games from Disney)...

Since some movies never ages, why games should get old and get (mostly) ignored? The "fog" about the abandonware confuse us too while old movies gets sold and/or remastered easily (think about Disney Classics or old movies)

Apart from this "nostalgia" thoughts, I think that some more tags on articles like this may help some people.... I think about tags like "suitable for children" or "retrogaming" (old games sold for Linux) or "remastered" (and many more)...

Sincerely, I've never thought about Steam as a store for children games too!
2 Likes, Who?

View PC info
Some titles are not performing fine on 2x Monitors - they need a bit extra tuning...

The good think is that with that bundle, if you have bought it, whatever future title comes from Humongous you get it for free + All the humongous titles are now available in Linux :O

I played the crap out of put-put saves the zoo when I was (very) young, and I still remember it quite well :)
I think I "debuted" in computing when I tried to print a color (yes, I was doing something bad) picture from the game, it didn't work, so I clicked like 20 times, and the printer started printing multiple copies using the expensive ink. Had to figure out how to stop printing.

I also bough the humble bundle (20$, it it tells anything) for sentimental value.


Quoting: wolfyrionThe good think is that with that bundle, if you have bought it, whatever future title comes from Humongous you get it for free + All the humongous titles are now available in Linux :O

Yeah, they weren't available on Linux at the time, IIRC. Does that mean I can only redeem the "Humongous Entertainment Complete Pack", and let aside :

to give away to friends?

View PC info
With my kids (5 and 3 years old), I really enjoyed "Pajama Sam No Need to Hide". Great adventure game !
1 Likes, Who?

View PC info
I hated how they were re-releasing those old games as new products on Steam just a few months ago but I see they've corrected release date. I remember running with 3 floppy disks to my neighbour when I was 7 years old. And Putt-Putt was about 24 diskettes! So quite a few trips. Amazing transfer of 4.3 MB/q with 1.44 MB per pocket! For all you young folks, it's in MB per 15 minutes, because we had to walk. With data in our pockets, not in packets. And we didn't have redundancy either, one mistake and had to start over! :D Copyright worked differently back then where I lived. Bad times but fun to joke about.

View PC info
I introduced video games to my sons (3 and 5, soon six) with Super Mario World (SNES, ZSNES) and a nice SNES usb controller, they found graphics and sound fun and cute and liked it a lot. It was hard for them though, the hand-eye coordination of jumping over enemies is difficult! But they tried and tried and tried, and got longer and longer. After about 40min and like 50 lives they had managed to get past the first few enemies and one devious pit ("how do you get over the pit?!" "you jump!" "ooooh"), they learn fast!

I loved games when I was a kid, I am so happy I can share this with them. I would love more content here about gaming with kids!
0 Likes

View PC info
Do the kid need to understand english in order to enjoy it? Or is the story told visually?
0 Likes
While you're here, please consider supporting GamingOnLinux on: