A look at 'Pro Pinball Ultra' now it's Linux, some quick thoughts for you

We lack a variety when it comes to Pinball games, so I was really hoping that this would be reasonably good.

The initial bit that put me off: the first thing it presents you with is a login/registration screen. I don't like any game that makes me do that, especially a single-player Pinball game. You can play as a Guest, so you don't actually need to do any registrations. The problem is, it doesn't just link to your Steam account, you have to manually sign up with an email, username and password. No thank you, any time you do this in a game you end up getting their junk emails sent your way.

The second annoying thing: the game will download additional content of around 866MB before you get to do anything else. Each time you pick a different pinball machine it will need to again download an additional bunch of data. Each time it downloads, it then needs to unpack the content too. So there's quite a bit of waiting before you can event get to smash some balls around. 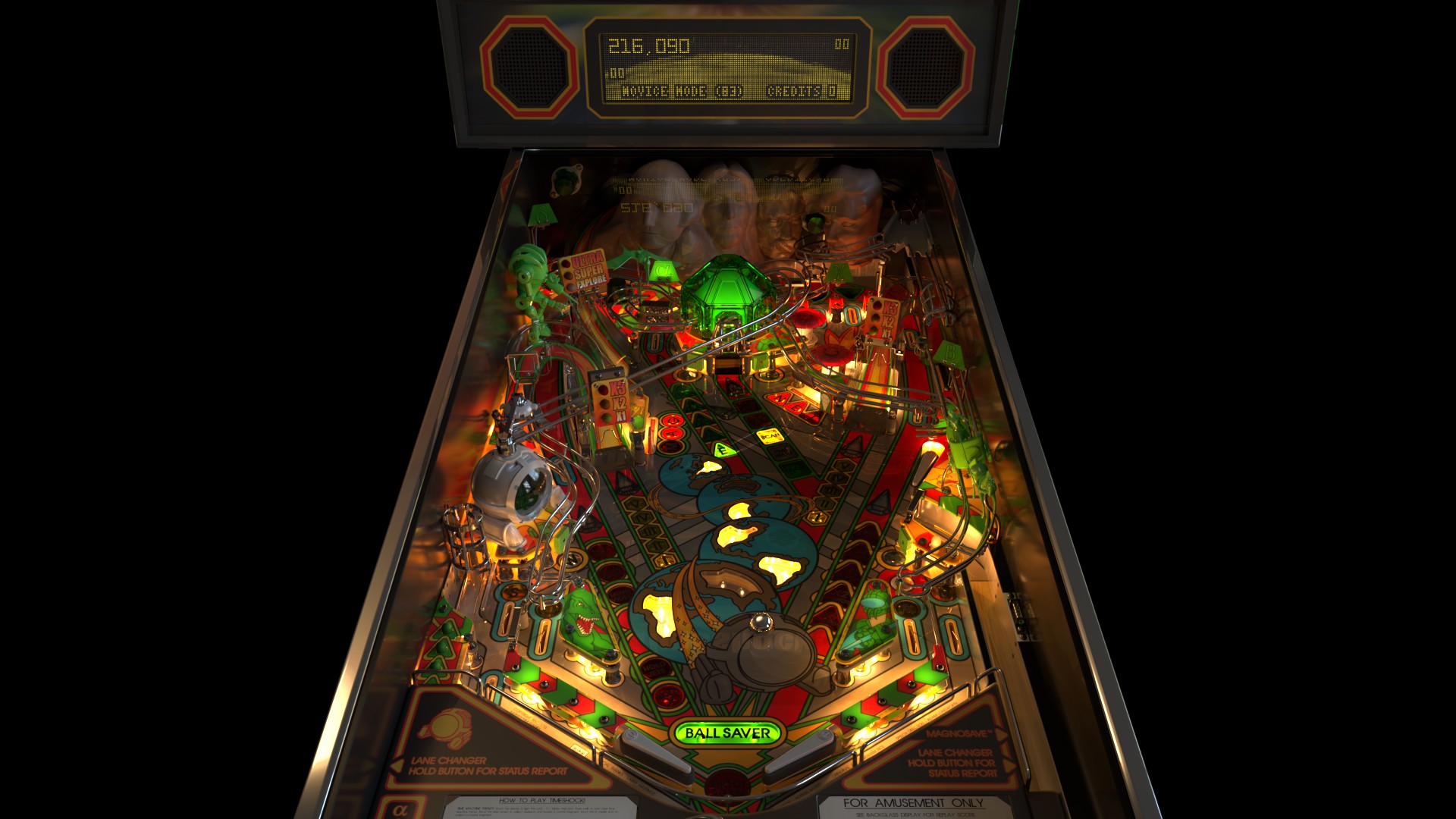 You also might want to write down the controls or attempt to memorise them. As simple as they are, I haven't found a way to bring them up in-game once you dismiss them and I forgot one key that I just couldn't get to work and I had no way of knowing what it was again.

With the annoyances out of the way, it's actually not bad. It certainly looks good, seriously beautiful actually. Crystal clear graphics that look reasonably realistic too, with different angles available to view. It's easily the most realistic looking Pinball game I've ever seen.

The only thing I'm not too certain about are the physics of it. It does seem at times that the hitboxes need a bit of adjustment, as I've been able to hit the ball quite easily when the ball is just out of reach. The ball doesn't seem to act like I would expect it too either, but it's possible I'm just so badly out of practice that it is normal.

Once you get past the initial annoyances, it's not a bad game overall, but I don't know enough about Pinball anymore (loved it years ago, but it's been a long time) to really get invested in it.

It seems like a game for people who already know exactly what they are doing. You can click the little "i" button in the corner and scroll past the story nonsense to learn some of the functions. Why they put the instructions in a hidden away place only after you scroll past a bunch of pointless story I've no idea.

It at least works without an issue and it's really smooth for me. If you're already into Pinball you will probably quite like it. Article taken from GamingOnLinux.com.
Tags: Arcade, Steam | Apps: Pro Pinball Ultra
2 Likes
Share

I am the owner of GamingOnLinux. After discovering Linux back in the days of Mandrake in 2003, I constantly came back to check on the progress of Linux until Ubuntu appeared on the scene and it helped me to really love it. You can reach me easily by emailing GamingOnLinux directly.
See more from me
Some you may have missed, popular articles from the last month:
The comments on this article are closed.
20 comments
Page: «2/2

No. The table is pre-rendered, and you have like 6 different views, you pick the view you want to use and it will download the table assets for your resolution. If you were to change resolution it would download the table for the new resolution but you'd still keep the old stuff downloaded, though you can manually just rm -r a dir.

So we have top of the line graphics cards that could render a world in milliseconds and we still can't render a pinball table is what you're saying?
0 Likes

View PC info
Does it work with a monitor in profile layout? That would be the ideal way to play it.
1 Likes, Who?
Grifter 17 Nov, 2016

Quoting: reaVerand we still can't render a pinball table is what you're saying?

Is that what I said? I don't think that's what I said. I think you might have an erroneous inference.


Yes it works flipped, some of the views are also meant for a physical pinball cabinet should you wish to construct one.
0 Likes

So how annoying is the login prompt really? And are there local high scores when you play without an account, so you can compete with friends and familly?

Quoting: stanSo how annoying is the login prompt really? And are there local high scores when you play without an account, so you can compete with friends and familly?

From what I can remember I don't think I cared much about it, but I did make an account pretty early on, and since then it's been out of sight out of mind. Local high scores work as you'd expect in a pinball on the matrix backboard, similarly it has an admin menu that works just like a proper physical machine.

I hadn't played (actual) pinball in aaaaaages, and there hasn't been any computer pinball for Linux, so when this came out I jumped at it, but again it's brutally hard, and having had a long pinball hiatus it feels like they really drop you into the deep end. It makes me long for easier pinballs ;) That said, it's thoroughly enjoyable. Especially when you feel the rumble in your controller =)
0 Likes

GOG has a DOSbox wrap of the Pinball Dreams series, although sadly I can’t recommend it. Better play the original Amiga games in UAE.
1 Likes, Who?

View PC info
someone tell the dev that the login registration should be on the score screen incase a person wants their score saved to the main board.
0 Likes
XenoMorphGOL 21 Nov, 2016

Quoting: wolfyrionI find it too expensive for 1 Table only (they have added more tables and content in recent updates)

Can you recommend a good tutorial on how to get these working on Linux, I've tried before but failed every time, at one time I managed to get to the pinball screen but the keys didn't work :(
0 Likes
ronnoc 30 Nov, 2016

Quoting: stanGOG has a DOSbox wrap of the Pinball Dreams series, although sadly I can’t recommend it. Better play the original Amiga games in UAE.

The Pinball Illusions pack in that bundle is awesome, and the music is awesome, and you even get a previously-unreleased table. For $10 I can whole-hartedly recommended Pinball Dreams.
0 Likes
«2/2
While you're here, please consider supporting GamingOnLinux on: