Nyheim, a single-player digital board-game about rebuilding after a pandemic

By Liam Dawe - 15 February 2017 at 3:19 pm UTC | Views: 11,817
Nyheim [Steam] is an indie single-player digital board-game, you're tasked with rebuilding after a deadly pandemic has swept the globe, but is it any good? 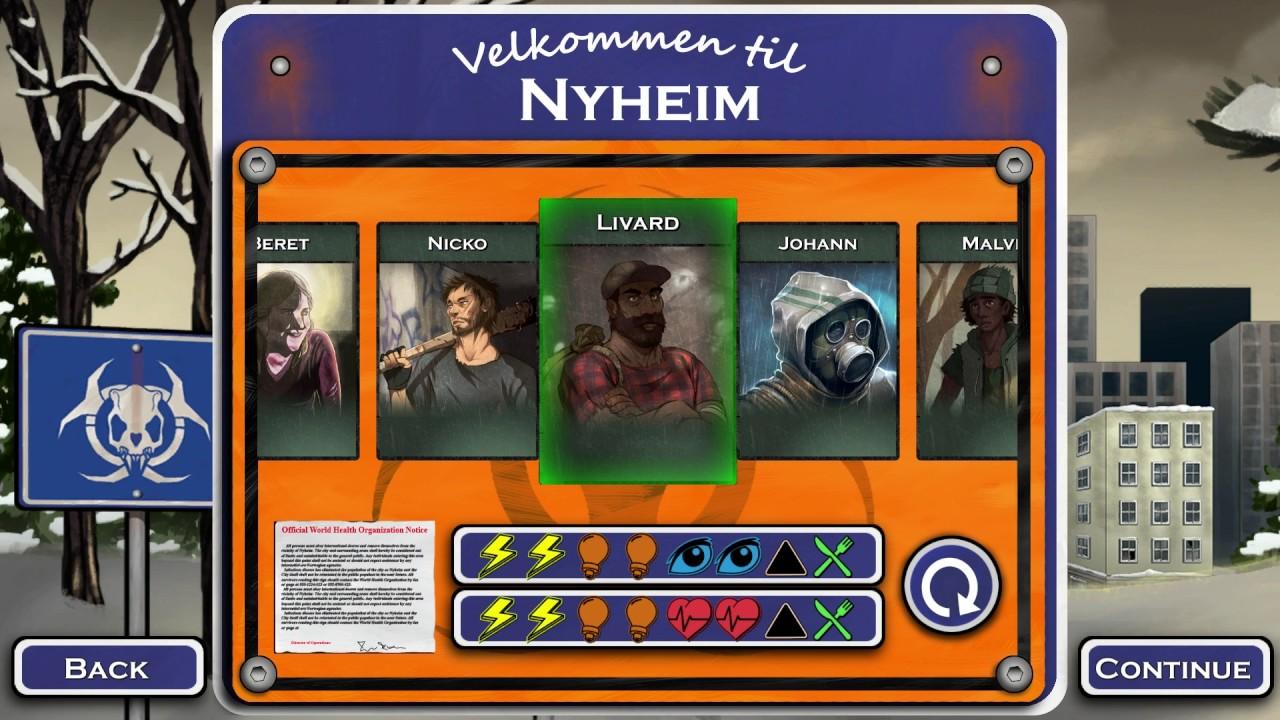 I'm going to be honest here, it feels like a mobile game. I'm not surprised, as it seems it is a mobile game that was ported over to PC. Everything is massive, there's no resolution options and it just feels far too in my face for a PC game.

The gameplay is simple, with you moving your group on the board from location to location, rolling digital dice and possibly using cards. There's a fair bit of random generation against you, which can be a bit annoying and will make it difficult. So, it's like a real board game with the randomness of it.

Each game starts off the with same objective: you need to build you HQ and then once finished it continues to give you more objectives. You will win by surviving through the winter, gathering enough population, or by rebuilding Nyheim's hydroelectric dam. Neither of which is particularly easy.

It is rather brutal though, my first game spawned constant radiated rats while exploring and then a unique random event card appeared giving every location a dangerous threat.After that unique event I tried some more exploring, but I was constantly getting injury cards which you have a choice on who gets it. Two injuries and a character dies, so it's quite an unfair game. I like a challenge, but especially for my first go it was utterly devastating. All my characters died, obviously.

The game makes use of the dice using a card-based system. So, exploring a location requires you to roll these dice. If the symbols on the dice match up to an action, you're able to do it. This is the same for battling, and dealing with threats as it's all based on the roll you get.

It has plenty of exploration, multiple objectives and ways to win. One way to lose, is to have too many crises and gain five crisis tokens, unless you somehow avert the crisis when the countdown on the card (turns) has run out. You could also just have your entire party killed off, like what happened to me.

Each play through gives you a certain amount of XP, which you can use to unlock various extras to adjust the gameplay. Once you use one, you have to unlock it again for another playthrough, so you don't keep them once unlocked. One such feature is to have less threats (very useful), but a drawback of this unlock is that more locations will be empty. Each bonus feature can have the drawback removed, but that costs even more XP.

Personally, I think it has an interesting take on the digital board game genre that does well at getting across the dire situation you're in. It reminds me a little bit of the board game "Zombies!!!" which is a good thing, as that game is awesome. If they tweaked the interface properly for the PC version I would be more interested, but having such a massive UI on my screen was a nuisance.

View PC info
It's actually quite fun and interesting. I agree, the GUI is huge, ad clearly made for phones, but it's still "fine", unlike some other phone games ported to PC. Anyway for its price i'd say it's a nice addition to a game library.
0 Likes
While you're here, please consider supporting GamingOnLinux on: