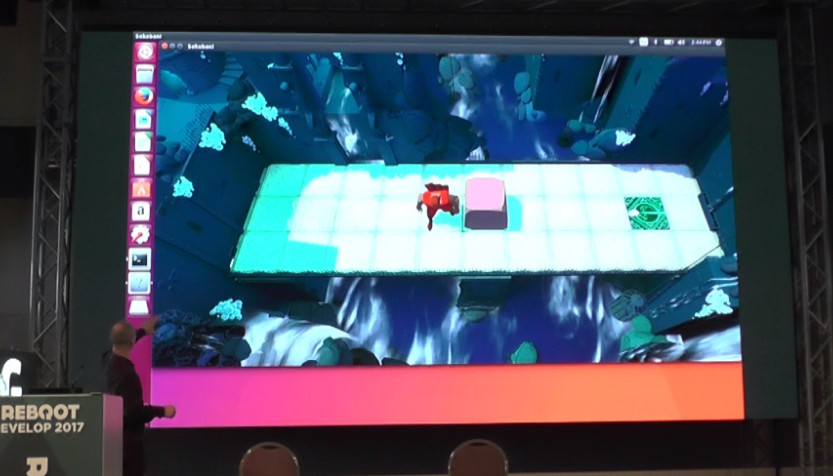 Take this with a pinch of salt, since it's early days for his next game, but Jonathan Blow (Braid, The Witness) actually showed off his next game 'Jai Sokoban' running on Linux.

You might be wondering why this is news, well, Jonathan has never been particularly interested in doing Linux versions, usually claiming something about Linux gamers not buying games, or Linux just not being good enough. His last game The Witness never came to Linux too, so it's really great to know someone so vocal against doing Linux games might actually do another.

It's not just him though, he has someone else helping with compilers and making sure it's portable.

He was onstage at the Reboot Develop 2017 Conference showing off the game, when to my surprise he did show it running on Linux. See the video here, he shows it off a little and then shows it running on Ubuntu directly.

It's running on OpenGL 4, although he did note he strongly dislikes OpenGL so he will switch to something else "by the end".

Awesome stuff, really pleasing since Braid was fantastic and I've heard nothing but good things about The Witness, which I would still love to be able to play on Linux one day. Article taken from GamingOnLinux.com.
Tags: Editorial, Indie Game
6 Likes , Who?
Share

edo 20 Apr, 2017
View PC info
Why is he not using the same custom engine used on The witness?
0 Likes

Quoting: edoWhy is he not using the same custom engine used on The witness?

He's writing a new engine in a new programming language he developed.
0 Likes

Spyker 20 Apr, 2017
I watched the video, but still I didn't understand what the purpose of his new language. What problems does it solve that cannot be done in other modern languages ?

Quoting: SpykerI watched the video, but still I didn't understand what the purpose of his new language. What problems does it solve that cannot be done in other modern languages ?

He explain it in the first video of this playlist why no other modern language is a perfect fit for gamedev:
https://www.youtube.com/playlist?list=PLmV5I2fxaiCKfxMBrNsU1kgKJXD3PkyxO
1 Likes, Who?

Ray54 20 Apr, 2017
View PC info
I know Jonathan Blow is not a favorite among us Linux gamers, but I have been following his series of programming videos for quite a while now and I have a lot of respect for the guy, both for his knowledge and his intuition into what makes a good game programming language. For many years I ran C++ commercial programming teams under Unix and I was considered an expert on C++, but I never felt it was a natural language for programming. Unfortunately, C++ was always a language where you can do a function in 7 different ways, but you will need to put a lot of work in to find out which of those is an 80% reasonable solution. For personal use, I ditched C++ very quickly once Java became mainstream, as Java was like daylight compared to the C++ fog.

I think Jonathan Blow's language will be excellent 80% of the time for writing games, I just wished he had fully created it, rather than writing the Witness, but I guess he has got to pay his bills first. I am not surprised that his language is showcased on Linux, it is by far the best OS for new languages, and was one of the many reasons I personally moved from Windows to Linux. I wanted to play with what were then new languages and only available on Linux, like Google's Go, Firefox's Rust and Gnome's Vala. So please allow Jonathan more leeway, as I am sure Linux will benefit in the longer term from his work.
8 Likes, Who?

kibbles 21 Apr, 2017
View PC info
I don't know why Braid has so much acclaim. I gave it a try and that game was just boring and awful.
1 Likes, Who?

Quoting: kibblesI don't know why Braid has so much acclaim. I gave it a try and that game was just boring and awful.

Fair enough; I found it focussed, engaging and well-crafted.

The attention to detail in the puzzles is mind-blowing (heh), but you do have to have a taste for the games specific implementation of puzzles.

I suspect most reviewers, being distracted by the artwork, ignored that it is just not a game suitable for everyone, or even for most people. The worst of the reviewers seemed rather smug and superior about liking the game when other people didn't.

View PC info
Whoa, what happened to Jonathan doing a presentation showing off on Linux?!
I'm shocked... in a positive way :)
I would have never expected that, but this is quite cool!

edit: ah okay, it's only one screenshot, just showing the game is also running on Linux.
Still cool enough ;)

StraToN 21 Apr, 2017
View PC info
Yeah, well... Jonathan Blow may be a nice guy and all, making great games, I really disliked his aggressivity aginst Linux in general. He's a big voice in the indie game dev community, so what he says resounds a lot in many people's ears. I'm waiting for actions after that, not just "oh, I changed my mind". The Witness was a great occasion, he missed it. He's not the only one (hello 2dark) so I'm currently a bit fed up.
4 Likes, Who?
1/2»
While you're here, please consider supporting GamingOnLinux on: