Ballistic Overkill updated as promised with Vulkan, but it's now completely broken (UPDATED with temp fix)

By Liam Dawe - 16 May 2017 at 6:34 pm UTC | Views: 20,927
Update: I managed to get it working, head to your prefences file located here:
.config/unity3d/Aquiris Game Studio/Ballistic Overkill/prefs
Set the fullscreen mode to zero and set some height and width and it seemed to reset it. Now it works normally on the first load, but it will break again. You need to set the windowed mode to zero each time you want to load it, for now. Vulkan seems to require the exact height and width too.

Some quick thoughts on the new version:

The new AA modes are nice to have and the higher modes certainly look good on OpenGL, but with Vulkan if you select 2xMSAA or higher the performance falls off a cliff. If you find Vulkan performing poorly, check your AA level as it seems to badly affect the Vulkan version.

This update has also introduced other issues. You can often see enemy outlines through walls, which obviously breaks the game quite a bit.

The new auto join queue feature for full-servers sometimes seems to completely break not letting you actually join a game. Claiming you're next in the queue, even with space available. If there isn't space available, clicking auto join will end up sitting on the player list, claiming you will be a spectator until space is available, but never actually progress into putting you into spectator mode. Sometimes it does work, it just seems to be a mess now.

The new "friends playing" feature also doesn't seem to work, with it showing zero for me. Even though checking my Steam list, with people clearly playing it.

Servers now sometimes outright refuse to let you join them, with a simplistic error message about failing.

The Vulkan version gives higher FPS in certain areas, but it's no way near as smooth as the OpenGL version.

Yeah...they're going to need to polish this up quite a lot. 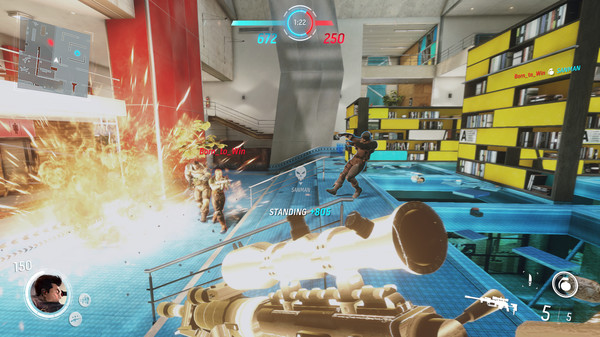 Confirmed by others as well, the latest Ballistic Overkill that adds in Vulkan and many other things, has completely broken the Linux version.

Yesterday, I broke the news that Ballistic Overkill would be updated today with Vulkan, new friends features, new AA options and loads more.

The OpenGL version gives a black screen and the Vulkan version just instantly crashes, as of today. The developers are already aware of it, as I've already been in touch with them about the issues.

Shame, was pretty hyped to try it with Vulkan and it is a very fun game. I'm willing to give the developer a little leeway here since I enjoy it so much, but considering all the people that have confirmed the Linux version is broken to me, including testing it myself, I am a little annoyed personally. It seems not enough testing was done their end on the Linux version.

Investigating it a bit further, it seems it may be a similar problem to the issues facing White Noise 2 at the moment. The game seems to set zero for the resolution width and height. I tried setting them manually, but the game overwrites the preferences file on loading. Article taken from GamingOnLinux.com.
Tags: Action, FPS, Steam, Vulkan | Apps: Ballistic Overkill
5 Likes
Share

View PC info
Not just me then.

This shows in console when run

PlayX 16 May, 2017
View PC info
There is a workaround
Open the prefs file in .config/unity3d/Aquaris Game Studio/Ballistic Overkill/
then you have set fullscreen to 0 (now opengl works) and edit you screen size (then vulkan works)
save and play.
But you have to do this every time because after close the game all is gone ( you can set the file to read only ;-) )

Quoting: PlayXThere is a workaround
Open the prefs file in .config/unity3d/Aquaris Game Studio/Ballistic Overkill/
then you have set fullscreen to 0 (now opengl works) and edit you screen size (then vulkan works)
save and play.
But you have to do this every time because after close the game all is gone ( you can set the file to read only ;-) )

Yeah I discovered that myself and added it to the top of the article.
0 Likes

View PC info
Strange, it never broke for me. I opened it up as soon as it finished updating and it worked just fine.
0 Likes

Quoting: PieGamer314Strange, it never broke for me. I opened it up as soon as it finished updating and it worked just fine.

what GPU? what drivers?

I have nvidia-381.22 and vulkan crashes for me. I am just finishing recompiling libreoffice and ill try with the launch string from above
0 Likes

View PC info
Post updated with more details on the issues the game now has. They made a real mess of it.
0 Likes

Xicronic 16 May, 2017
View PC info
There also seems to be an in-game bug now where people can see others through walls. It's become a sniperfest =/
0 Likes
1/4»
While you're here, please consider supporting GamingOnLinux on: