Forsaken Castle is a Castlevania-inspired platformer that’s being crowdfunded, has a demo available

By BTRE - 10 May 2017 at 10:59 pm UTC | Views: 6,745
With it’s very unsubtle and unambiguous nods and stylistic references to both classic Castlevanias and metrodvanias, this game has tickled my fancy. 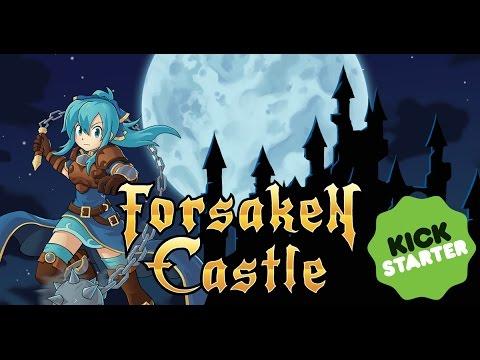 YouTube videos require cookies, you must accept their cookies to view. View cookie preferences.
Accept Cookies & Show   Direct Link
I’m weak to the time-proven formula of metroidvanias. They’re usually fun enough and distinct enough to keep me from feeling that the genre is gettting stale. Forsaken Castle [Official Site] whole-heartedly embraces the Castlevania legacy and offers mimics very many of the visuals, music and gameplay and even weapons. You play as Lily, a paladin who uses a whip as a weapon and attire suspiciously similar to a certain Belmont, is tasked with dealing with the undead at a castle near a village. If this all sounds familiar, then it’s definitely intentional.

The brief demo worked great for me and confirmed that most of the tropes that I have come to expect from a Castlevania game will be present – the only thing missing were secret breakable walls. That said, there are a few evolutions that distinguish the game such as a regenerating magic bar and the ability to climb up the ledges of platforms. It may not sound like much but it definitely increases the tempo of gameplay.

Forsaken Castle is, as of the time of writing, well past its modest funding goal and seems to be set to be released later this year. I look forward to see how it eventually works out. The game has been greenlit on steam is also expected to have a DRM-free release. You can grab the demo or back it from the Kickstarter page. Article taken from GamingOnLinux.com.
Tags: Action, Crowdfunding, Demo, Indie Game, Platformer | Apps: Forsaken Castle
4 Likes
Share

chimpy 11 May, 2017
View PC info
I also love Metroidvania style games. This one reminds me a whole lot of Symphony of the night.
0 Likes

View PC info
I wanted so bad Battle Princess Madelyn to come to Linux but hopefully this will cover me.
0 Likes

View PC info
This should tide me over until Bloodstained comes along.
0 Likes
Drakker 11 May, 2017

View PC info
Played it, its fun. Not my favorite game ever from the demo, but definitely on my wishlist now. I'll be sure to grab as as soon as its on sale.
0 Likes

View PC info
It looks like Rogue Legacy, IMO.
0 Likes
Chromaticdeth19XX 15 May, 2017
Oh look, yet another Metroidvania game that will release before Chasm even gets to beta...
Still working through Hollow Knight but I know that the game only has about 10-15 hours left of gameplay. Hopefully, there will be a new Metroid out on Switch soon.
0 Likes

MightyTrollzor 17 May, 2017
View PC info
Ok I just played through the Demo and I think it does show some promise. The controls feel good enough (although I had to play with my Keyboard because a lot of Unity games mess up the bindings on the Dualshock 4 and I couldn't use custom binds in this game) but I gotta say I REALLY miss the backdash from the igavania games although the sprint button is welcome.

Also some of the enemy AI isn't perfect yet and the bosses wheren't that impressive. The first one is just an axe knight and a major pushover and the second boss just teleports around the room and spams homing skulls which only despawn when you hit them with your whip which is pretty annoying if they gang up on you.

What I'd also love to see is some enemy death animations because right now every enemy just puffs into a purple smoke cloud when you kill them.

All that said it's just an Early Alpha and if they iron out some of the flaws this could be a really good metroidvania game.
0 Likes
While you're here, please consider supporting GamingOnLinux on: