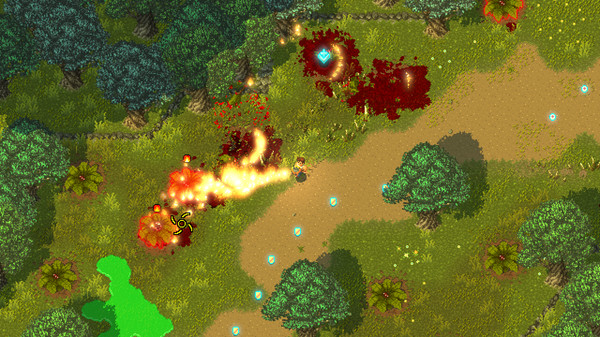 In need of a game to play with a friend when they come over? Perhaps Serious Sam's Bogus Detour [Steam] is what you want as they just added full split-screen support.

In the recent patch they finished off the split-screen support, which was previously added in, but in an experimental unfinished form you had to run commands to access. Now it's finished enough to be included by default.

On top of that, they've also fixed several crashes (hopefully some of the issues I experienced!), improved support for High DPI and other general improvements. You can see the full changelog here.

In an earlier patch, they also fixed Steam Controller (and other gamepads) support on Linux. I tested it just now and it does indeed work a lot better!

Serious Sam’s Bogus Detour is an all-new action-adventure in the legendary Serious Sam saga from Hammerwatch developer Crackshell. Battle through beautiful Mediterranean locales, dangerous biological weapons labs and even high-tech moon bases as a one-man wrecking crew or in four-player online cooperative for maximum chaos! Dominate the chaotic Survival and Versus modes or make your own mods, modes, and even total conversions with the include game editor. Serious Sam’s Bogus Detour is the biggest little Serious Sam game ever made!

Article taken from GamingOnLinux.com.
Tags: Action, Steam
4 Likes, Who?
We do often include affiliate links to earn us some pennies. We are currently affiliated with GOG, Humble Store and Paradox Interactive. See more here.
About the author - Liam Dawe

View PC info
Serious Sam games tend to have really good split-screen multiplayer. Playing the original Serious Sam TFE with 4 players on one screen was a bit low resolution, but amazing experience nonetheless. And now they have VR and "flat" players playing together. Makes one think that these guys actually know their shit. :)

Yes, I know that Bogus Detour is by another team.
0 Likes