Thanks to SteamDB, it seems a A Hat in Time [Steam, Official Site] might actually be coming to Linux. It was leaked a while ago by Virtual Programming, so it will be interesting to see what happens. 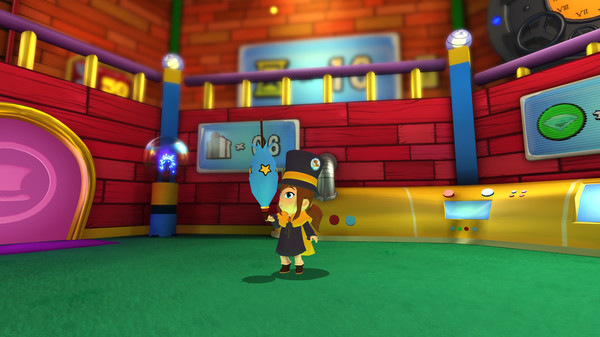 For those that don't remember, back in August, Virtual Programming updated their website to list new games they're porting. MXGP3 - Motocross was one and A Hat in Time was another. However, the developer of a A Hat in Time said they knew nothing about it and any mention of it from VP's site was removed.

Here we are in October and on SteamDB this happened, showing clearly that a something is happening in regards to a Linux version.

A Hat in Time is a cute-as-heck 3D platformer featuring a little girl who stitches hats for wicked powers.

A little girl and her spaceship
In A Hat in Time you play as a tiny space-travelling girl with a big tophat. Her adventure is halted when all her fuel, the Time Pieces, is lost and scattered across a nearby planet. Hat Kid must now jump, fight and stitch new hats to make her way into every nook and cranny of this new world in order to restore her fuel and resume her journey. On her way, she'll bump into the menacing Mafia of Cooks, the goofy birds of Dead Bird Studio, the spooky shadows of Subcon Forest, and more!

Will be good to see it on Linux, so I will keep an eye on what happens and update you if I hear anything.

View PC info
A good demonstration that public statements from the developer is not always the gospel truth. Obviously, but good to be reminded.
Public statements/press releases are essentially marketing and should be treated as such.
0 Likes
Darkdisorder78 10 Oct, 2017
Exactly. The devs should port to the Nintendo switch at the same time
0 Likes

QuoteIt was leaked a while ago by Virtual Programming

Virtual Programming? Thats not really good news for DRM-Free world. Last time i encountered them is when they made port for Overlord and tried to screw all existing customers. As usual, after shitstorm they "added OverLord for linux for all existing Steam customers", but then GOG users asked about port they simply refused to release it on GOG, albeit its same distributor on both Steam and GOG sell Overlord.
0 Likes

QuoteIt was leaked a while ago by Virtual Programming

Incidentally, if you bought the Windows version, you are not "an existing customer". Only Linux sales go towards paying for a Linux port.

Yes, but i repeat, AFTER shitstorm started on Steam and many Linux users found themselves on very funny situation where they dont have linux port in their account because they "purchased game prior of port being released" so they have to repurchase it again, BUT they cannot do it at all because Steam says them that game is already purchased, and all that mess Codemasters quicly said Ok, everyone get it.
But oooh yeah, on GOG Codemasters says "nope, we not going to release it here".
So, on Steam they in the end given it to all previous purchasers, and on GOG they not giving it to anyone.
0 Likes

Quoting: KuromiBut oooh yeah, on GOG Codemasters says "nope, we not going to release it here".
So, on Steam they in the end given it to all previous purchasers, and on GOG they not giving it to anyone.

Up to Codemasters, yet for some reason you chose to blame VP for this.

True. But Codemasters never answered to my request. VP at least have Github repo there you can contact them.

Ok, lets me rephare it this way - no matter who makes port i pretty sure GOG customers will be screwed in some way.
0 Likes

Quoting: GuestIt was actually me who made Codemasters aware of the problem. However, the game was also available for purchase from us as a standalone release. However we sold practically no copies of this because Linux players said "I'll wait until it's on Steam, I already paid for it".

Do you know what the current situation is for studios like VP or Feral? Does Steam works well for porters, I mean do you get the share you deserve when titles are sold on steam that where ported afterwards?