Intra-System: Trust Issues, aside from being a mouthful to say, is a short adventure game with a heavy emphasis on audio feedback and choices. I gave this recently-ported free game a play and have a few thoughts to share. 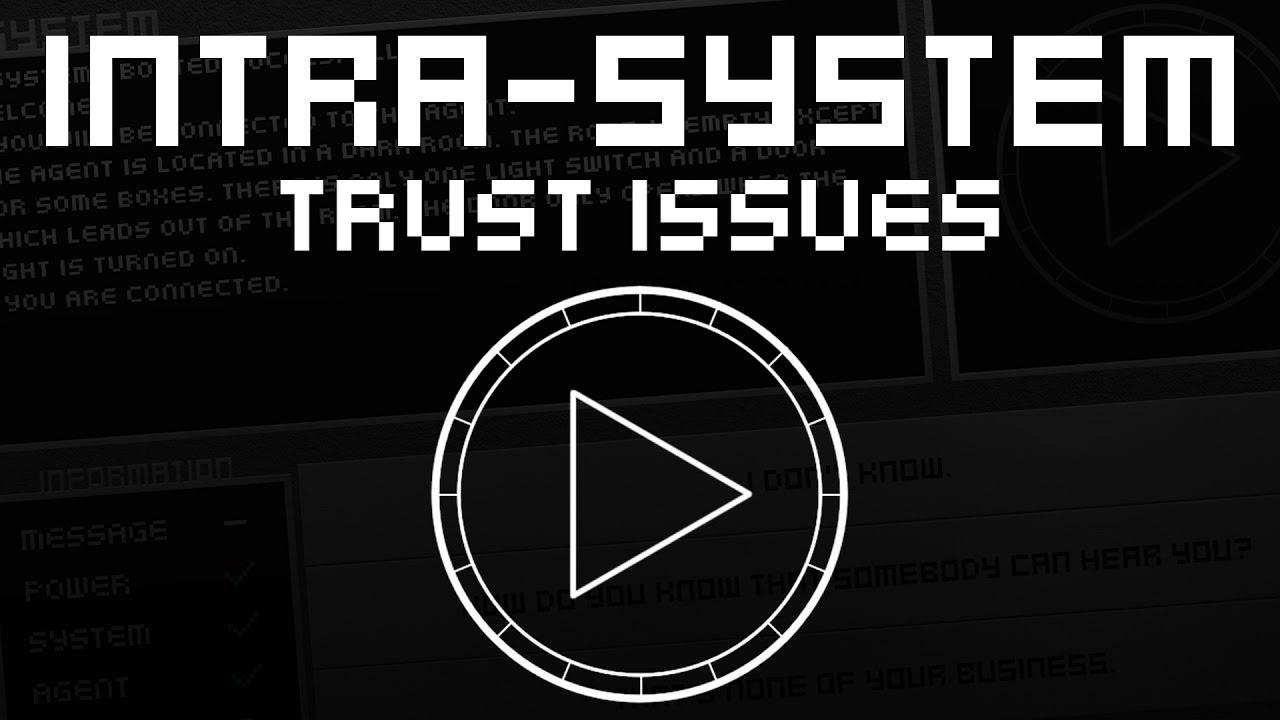 On its face, reading text and listening to some German guy describe his surroundings might not sound like a very interesting premise for a game. The beauty of Intra-System, though, is that it manages to create an illusion that there’s a lot more going on than you might initially think. The game is designed around being played in short runs that take no more than 15 to 20 minutes and the questions raised quickly stimulate curiosity, leaving players wanting to find out more about what is really going on.

The game starts off mysteriously enough: text from some sort of system describing a room and its properties fill most of the screen while you get a transmission from someone only identified as “The Agent”. He is alone in a dark room, about as disoriented and lost as the player is at that moment. For some reason, the two of you are in communication and how you communicate is very much the central part of the gameplay. The player is often given information the Agent is not aware of, such as how to safely exit a room and what will trigger “punishment”. The relationship you build up with this mysterious person is down with what you choose to suggest that he does and how he, in turn, gives you feedback of what he’s experiencing.

Intra-System is good at tempting you to betray the trust of the Agent, by giving you very little to work with in each room that the Agent finds himself in. You may find documents and get feedback that might give you more of an idea of what you’re dealing with, but often getting what you want involves putting the Agent’s through a lot of discomfort. No pain, no gain—would be the general line of thinking except that consequences of the player’s curiosity can often be very unpleasantly lethal. The environment and the choices you end up making quickly end up feeding into a (justifiably mutual) sense of paranoia and mistrust that further complicates things.

Yeah, it’s pretty awful to hear the poor bastard scream in terror as you lead him to his doom. There’s no excusing that. Or maybe there is. When you learn something new about the game and what a particular set of choices can lead to, it can almost feel worthwhile to be evil. As if to stimulate your inner sadist, the game shows all the documents you’ve collected on the main, nudging you towards finding more and using them to piece together all the details of the mysterious location you’re at and your present circumstances. Does that justify knowingly letting a man choke on toxic gas in order to test a theory or satisfy morbid curiosty? Depends entirely how comitted you are to finishing the game and trying to experience every last bit of the ride.

I won’t give too much away, but I found this whole experience to be oddly compelling. I felt that the voice acting could have been a bit stronger but, really, I’m nitpicking somewhat there. It did an effective job of getting across the Agent’s state of mind as well as the messed up nature of the setting. If each run were longer, it’d also be harder to keep track of what happened where and why, so I think that the length is also spot on for this sort of thing.

This is an easy title to recommend to someone looking for something different and engaging. You can grab Intra-System: Trust Issues by paying whatever you want on itch.io or gamejolt.

I tried the game but it didn’t grab me… Also I didn’t like that there was no subtitles. I stopped playing quickly.
0 Likes
While you're here, please consider supporting GamingOnLinux on: