I'm a huge fan of drag and drop creation tools like Construct 3 [Official Site], that allow you to create games by building simple events sheets and it seems they've continued making Construct 3 more awesome to use.

For those not familiar, Construct 3 is a game engine that can run directly in a browser window. They're working on a desktop version too, which will support Linux as well.

Firstly, they've announced a rather handy feature that let's you give a remote preview URL to another user, to allow them to play your game while you're building it. What makes it even more awesome, is that you can get your own preview of them actually playing it. That's a beautiful feature when you think about it, watch someone play your game easily so you can spot issues. You can even continue working on it and update it, prompting anyone connected to the preview to refresh for an updated build. 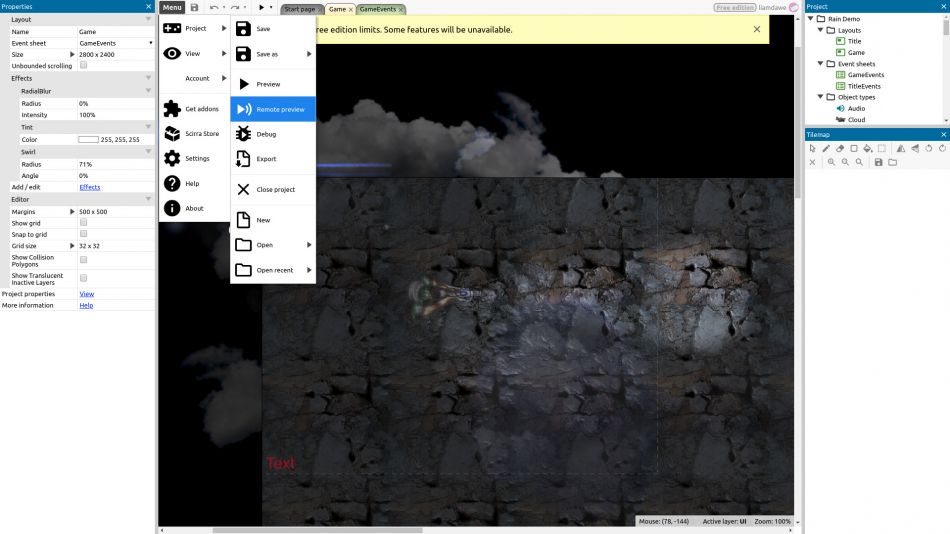 On top of that, they're working on an entirely new runtime for games built with Construct 3 to improve performance. The current runtime is the one from Construct 2, so it's a little old and stale by today's standards.

The new runtime has shown some impressive performance gains, like this example where they tested creating 10,000 sprites then every tick destroy X random sprites and re-create new ones, this tests how many sprites can be destroyed and recreated every tick and still hit 30 FPS: 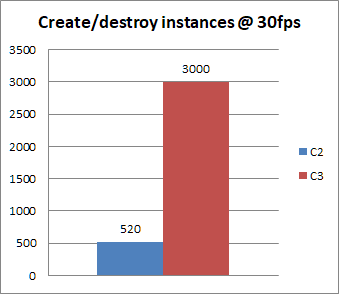 As you can see, the result speaks for itself, what a huge performance difference. They recently wrote up another post about how they've moved over to using a WebAssembly build of Box2D to power their Physics, instead of Box2D with asm.js. It uses less RAM, performs better and is again another great step forward for Construct 3.

It's certainly going to be interesting to see what people are able to create once the new runtime is available.

As much as I love Construct 3, the price is pretty off-putting to me personally—£79 every year. I really don't like software subscriptions, I would much rather pay a little more to keep access to it. The free version is also too limited to really do much with, other than check and see if you like the idea. Even so, it's still a fantastic tool.

View PC info
I guess publishers love subscriptions because they make people pay a LOT more over time, without them noticing it. I am pretty sure the average WoW player would faint if they calculated how much money they sunk into the game since it launched.

But yeah, to me it's a dealbreaker. I don't subscribe to anything unless the service itself is of a reoccurring nature. Newspapers are. Cable TV is. Software isn't.
2 Likes, Who?

View PC info
I had a quick look at it some time ago. The engine itself looks really nice but the subscription keeps me from using it.
As a mere hobbyist I'd be fine with buying a copy and using it for a couple of years even if a newer version is out. Paying a subscription for a software which I only use occasionally is a huge no go for me. I also dislike using an engine that gets taken away from me if the developer should suddenly disappear. All my projects would become useless all at once.

I was really excited when they announced that Construct3 would be available on Linux but after I saw the price model I decided to stick with GDevelop5 which has a completely rewritten IDE (Beta).
https://gdevelop-app.com
1 Likes, Who?

Quoting: WendigoI had a quick look at it some time ago. The engine itself looks really nice but the subscription keeps me from using it.
As a mere hobbyist I'd be fine with buying a copy and using it for a couple of years even if a newer version is out. Paying a subscription for a software which I only use occasionally is a huge no go for me. I also dislike using an engine that gets taken away from me if the developer should suddenly disappear. All my projects would become useless all at once.

I was really excited when they announced that Construct3 would be available on Linux but after I saw the price model I decided to stick with GDevelop5 which has a completely rewritten IDE (Beta).
https://gdevelop-app.com

Can you share your experience with gdevelop comparing it to Construct 2?
0 Likes

View PC info
Well I can share my experience with GDevelop but I have never really used any version of Construct to be able to compare the two.

GDevelop 4.x had a few bugs on Linux especially the last version made it unusable for some Linux users because of a bug that froze the whole engine when opening a scene.
4Ian, the lead developer of GD has then given up on the wxWidgets based IDE and began recreating the IDE from scratch as an Electron application.
The new version (GDevelop5) is still in beta but most features are already available except for the native export which will still take some time and the javascript event editor is still quite rudimentary but the developer wants to integrate either Ace editor or Atom/VSCode with full code completion later.

In it's current state you can export to HTML5 and Android/iOS.

As in Construct you do all the logic in a flowchart where you connect conditions with actions to perform logic.
For more complex stuff you can enable ready to use behaviours on the game objects to enable physics, jump'n run and other logic.
One thing to get used to is the object filtering. When you want to create logic for a specific instance, you have to create filter conditions like "ENEMY is in collision with BULLET". If you add a sub event to this all further logic is only applied to that specific instance that got hit by the bullet for example.
One thing I'm missing in the engine is parent/child relations. There is a prefab system called "external layouts" integrated but if you want to move objects simultaneously you have to create the logic yourself.
There is currently a new extension in the making that will enable object skeletons but I don't yet know what it will be capable of.
All in all GDevelop is a nice open source game engine, especially for quick prototyping.
0 Likes
While you're here, please consider supporting GamingOnLinux on: