As we speculated previously, Valve have now officially announced their new version of 'Steam Play' for Linux gaming using a modified distribution of Wine called Proton, which is available on GitHub.

What does it do? In short: it allows you to play Windows games on Linux, directly through the Steam client as if they were a Linux game.

What many people suspected turned out to be true, DXVK development was actually funded by Valve. They actually employed the DXVK developer since February 2018. On top of that, they also helped to fund: vkd3d (Direct3D 12 implementation based on Vulkan), OpenVR and Steamworks native API bridges, wined3d performance and functionality fixes for Direct3D 9 and Direct3D 11 and more.

The amount of work that has gone into this—it's ridiculous.

Here's what they say it improves:

It currently has a limited set of games that are supported, but even so it's quite an impressive list that they're putting out there. Which includes DOOM, FINAL FANTASY VI, Into The Breach, NieR: Automata, S.T.A.L.K.E.R.: Shadow of Chernobyl, Star Wars: Battlefront 2 and more. They will enable many more titles as progress on it all continues.

To be clear, this is available right now. To get it, you need to be in the Steam Client Beta.

There will be drawbacks, like possible performance issues and games that rely on some DRM might likely never be supported, but even so the amount of possibilities this opens up has literally split my head open with Thor's mighty hammer.

Holy shit. Please excuse the language, but honestly, I'm physically shaking right now I don't quite know how to process this.

Update #1: I spoke to Valve earlier, about how buying Windows games to play with this system counts, they said this:

Hey Liam, the normal algorithm is in effect, so if at the end of the two weeks you have more playtime on Linux, it'll be a Linux sale. Proton counts as Linux.

I am the owner of GamingOnLinux. After discovering Linux back in the days of Mandrake in 2003, I constantly came back to check on the progress of Linux until Ubuntu appeared on the scene and it helped me to really love it. You can reach me easily by emailing GamingOnLinux directly.
See more from me
Some you may have missed, popular articles from the last month:
The comments on this article are closed.
572 comments
Page: «33/58»

Now that is huge!

Yep, that is _the_ most important piece of information for me. Finally there is a chance to get better numbers regarding market/financial share between platforms. I really hope that Linux will rise from the 0.5% to a much more significant percentage. Once the numbers increase developers will keep Linux much more in mind when starting a project.

Regarding Feral, I really hope that they will continue to provide us with a high-quality ports like recently RoTTR or soon LiS:BTS, at least once in a while. I'll certainly continue to buy from their store. Like someone already stated, may be they will end up eventually with even more work. I would love that.
5 Likes, Who?

Quoting: scaineSorry if this has been asked before - is Proton going to contribute back into Wine generally? I suppose I'm asking if DXVK progress helps Wine more generally?

They contribute to wine, see https://github.com/ValveSoftware/Proton/issues/86
4 Likes, Who?

Quoting: GuestSo, while I can see how Valve thinks this is a good thing for getting games on Linux, and getting gamers over to Linux, it in turn has a big impact to those of us who were bringing games over to Linux officially. I don't see how Proton is going to help us with the big issue of getting publishers interested in Linux as a platform... in fact, I see it doing the opposite.

Gonna have to disagree. This is the chicken versus egg problem and it has to be sorted out one way or another. Valve and GoG can either get together and require linux ports of every new title OR they could go this route. Valve has sunk a bunch of money into this to provide a way out for them that want it, so it's rather obvious that Valve is favoring Linux. In the short term yes, this is going to hurt the odds of Linux ports to major titles, but at the same time it incentivises an increase in use of Vulkan as that makes it easy to run in PROTON. In the long term that grows the user base, and a large user base gets catered to.

We will get one of two outcomes here. 1)We will either get a large enough user base that big devs shift their first their APIs to be more friendly with PROTON and then a shift to native ports to avoid user experience issues.

2) PROTON plays all the games seamlessly from Steam, and eventually is so good that it doesn't matter whether we get a port or not.

The results are the same for practical purposes.

Now that is for new titles going forward, but what about Steam's existing library of titles that WILL NEVER GET A LINUX PORT? Do you think Ubisoft is gonna hand a Feral a contract top port Assassin's Creed and Far Cry? How about EA for anybody that feels like playing Crysis? A whole bunch of my games on Steam don't even work with WINE like Sleeping Dogs, but this push by Valve has the best chance of fixing that.
5 Likes, Who?

Comandante Ñoñardo 22 Aug, 2018
View PC info
It will be very awesome if EA follow this example..
If they don't want to port their games to Linux, at least make a Linux Origin client with an embedded compatibility layer like this.
4 Likes, Who?

Quoting: ulysses768You can't have a winning business plan for a game streaming service if that service relies on Windows instances/VMs. Right now on AWS Linux GPU instances are 20-25% of the cost of Windows instances for the same instance type. Video games, AR, VR are the future of entertainment and margins will be nonexistent if you have to pay MS a license for every node you spin up. Linux gaming is the future, it's just that whatever OS the consumer is using is irrelevant, just like any other web app. No one runs Windows on cloud services unless they absolutely have to.

I personally would rather run my games local. I don't really like being enslaved to a cloud provider to run my games. Not to mention I don't want to be forced to have an internet connection either(although this is less important than the first point). I really don't like the general trend towards web apps. I find them to be more cludgy than native apps. The web definitely has it's place but JS heavy websites that try to take the place of native software definitely isn't it. The cloud also has it's place but I don't really want to replace my own compute power with the cloud.
3 Likes, Who?

Quoting: Comandante ÑoñardoIt will be very awesome if EA follow this example..
If they don't want to port their games to Linux, at least make a Linux Origin client with an embedded compatibility layer like this.

"In addition to that, we've been supporting the development of DXVK[github.com], the Direct3D 11 implementation based on Vulkan; the nature of this support includes:
- Employing the DXVK developer in our open-source graphics group since February 2018
- Providing direct support from our open-source graphics group to fix Mesa driver issues affecting DXVK, and provide prototype implementations of brand new Vulkan features to improve DXVK functionality
- Working with our partners over at Khronos, NVIDIA, Intel and AMD to coordinate Vulkan feature and driver support"
(https://steamcommunity.com/games/221410/announcements/detail/1696055855739350561)

My personal guess is that this a.o. correlates to:

"Shmerl: How did you manage to work around the lack of stream output like features?
YoRHa-2B: I didn't, that's kind of the point. And that's also why it might still take several months for this to go live, but it should happen eventually".
(https://www.gamingonlinux.com/forum/topic/2753/post_id=16614)

Quoting: GuestA big issue here is, does Proton really mean "Linux support" ? I don't think it does. Here's why.

When you get a port to Linux, even if it's by a third party, a lot of work has been done to bring that game over to the platform... even if a D3D wrapper has been used etc (i'm not going to go into the "lazy wrapper" argument). The porter is selling you a product that is certified by them to work with Linux, and has official backing of the original developer/publisher. If something doesn't work, or breaks, there is an official support method available. It is someones job to provide help on getting it working, and to fix that if it doesnt....

I think Valve are being pretty clear about that and most people here realize it behind all their excitement. The mere fact that Valve are actively investing money and developer time in Wine is thrilling to me, and them making it easier to use in the process for people who don't like to tamper with configs is icing on the cake. There is no question that this is "just Wine integrated into Steam," but Valve are also clearly putting effort into making Wine better, and by all accounts they have been making considerable progress in the past half year alone.

Because it's an experimental feature by nature, I and many others here have already said they would continue to buy actual ports primarily. And there are those who won't buy newer Windows games even if they run well through Proton, out of principle. But easier access to games we all already owned and couldn't play without a fuss is a definite short-term win, and I feel like things are likely to be favorable to porters in the mid-term when the userbase grows and more studios become interested in having a properly supported product on Linux.

There may be rough waters ahead, but I'm optimistic for a rainbow on the other side :)
8 Likes, Who? 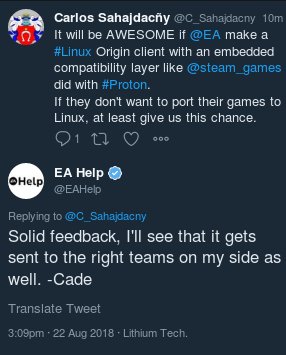