Feral Interactive have put out the system requirements for Total War: WARHAMMER II, due on Linux this month

Ready your swords and your axe as Total War: WARHAMMER II is heading to Linux this month and Feral Interactive have now put up the system requirements. 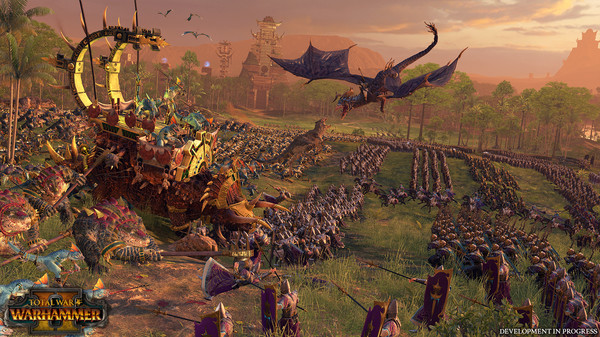 Here's what you're going to need at a minimum:

For the recommended specs, you will want:

As a reminder, it's going to use Vulkan and so you're going to need up to date drivers. Feral have tested it on NVIDIA with the 396.54 driver and on AMD they require Mesa 18.1.5.

Feral have done some really good stuff for Linux gamers over the past few years, so hopefully they will continue giving us some top quality games. We also still have Life is Strange 2 and Total War: THREE KINGDOMS to come after but nothing else has been announced yet.

We should hopefully have a review up on it a little while after release.

SadL 12 Nov, 2018
View PC info
well.. unfortunately for me these requirements look kinda too much for my pc..but I want this game so much and I will try it no matter what. I got it just now from Humble. I will probably get a new pc next year (at last!) so its ok either way.

Hopefully they will release it soon! Thank you Feral! <3
1 Likes, Who?

nadrolinux 12 Nov, 2018
View PC info
Too bad that Feral ports mostly Total War game series, however it means one more native port, so it's better than nothing.
1 Likes, Who?

View PC info
I've been waiting for this. Now to try and find all the DLC on sale somewhere because there's no way I will ALL of it at full price.
0 Likes

View PC info
As much as i love Feral and their great work porting games to Linux...they are doing too many games like this one.

They'd be better off doing something with a wider appeal.

View PC info
Well....this one has appeal for me. Other Total games don't. I would imagine that they can release the Total series a bit easier as well - experience with both the technical challenges, and working with the publisher (Sega).

Anyway, I don't meet the CPU specs for this game, officially, but I think the high core count might end up carrying me through. So I'll be buying it and basically hoping it's playable (the first was, and it didn't use Vulkan). Of course, I'll wait until it's actually up on the store before buying.
0 Likes

Feral, there are more Brands than Intel who build good CPUs!
0 Likes

Wow , do you seriously think that game won't work on AMD?
8 Likes, Who?

Comandante Ñoñardo 12 Nov, 2018
View PC info
C'mon Feral, stop wasting the time with this! You should be releasing the episode 1 of Life is Strange 2 right now, because it has Platinum rating when played via Steamplay 3.16-4
0 Likes

Quoting: mirvAnyway, I don't meet the CPU specs for this game, officially, but I think the high core count might end up carrying me through.

All these requirements mean is they didn't test on any AMD CPUs. If you truly believe that the game won't work on AMD CPUs then you don't understand PC gaming or PC hardware. I for one can say every Feral port I own has worked on various AMD CPUs.