Valve have released Danger Zone, a Battle Royale mode for Counter-Strike: Global Offensive along with it going free to play.

All existing players have been upgraded to "Prime Status", which is a special status for verified players and only matches you against other Prime players. To become Prime after this update, you need to either purchase Prime from the Steam page or "reach Rank 21 by earning XP and add an eligible phone number to your Steam account" according to Valve.

Considering how I’m quite a big fan (understatement) of Battle Royale type game modes, I’m really pleased Valve has done this. I think it’s important for Linux gamers especially, since BR isn’t something we have much choice on. There’s no Fortnite, no PUBG and any other game with such a mode is very niche. A platform missing one of the most popular things in gaming, isn’t a very attractive platform. So even if it’s not your cup, understanding that I think is important. So again, I’m extremely happy about this. 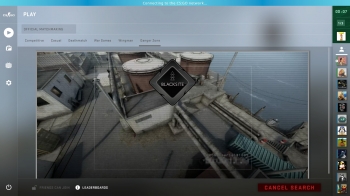 Danger Zone can be played solo, or in squads of two or three players. On top of that, it's mixing things up a little. As expected from Valve, they're tweaking it with their own special flavour.

The main hook, as with all Battle Royale games is that you only get that one precious life. You also don't start with anything, so you need to be extra careful. You need to hunt for equipment and avoid players until you're ready—or catch someone with their pants down whose hunting for equipment themselves. Over time the map area gets smaller and so you're forced together. The effect Valve has gone for this is different too, with missiles firing from some off-shore rig onto the map. From that, something spreads across sucking all colour and life away from the map and it does look cool. 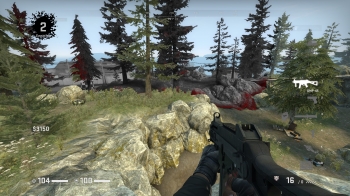 Each player has their own personal tablet, which tracks player positions in an area and it also allows you to buy weapons and equipment which fly down to you from a drone: 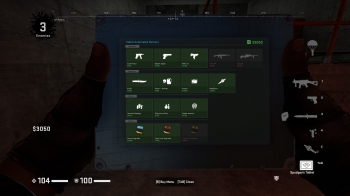 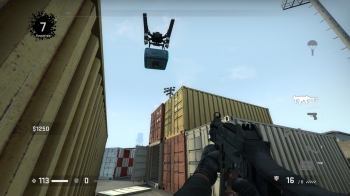 The drone system is quite a highlight, not just for yourself either. You can shoot them down, starving your enemy of their goods or follow them to ambush an enemy. Additionally, you don't actually have to use the dropped items yourself. Is an ally running low? Order something for them. You can also upgrade your tablet a few times, with niceties like seeing where the safe area will be when the map shrinks again, seeing drone paths and so on.

You can also rescue hostages, by carrying them to a safe area which will give you an additional cash reward to buy even more equipment. Naturally though, this will make you a lot slower and more vulnerable to other players: 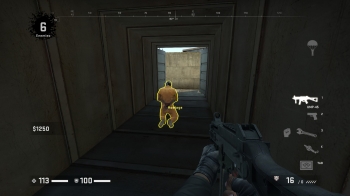 On top of all that, for those of you who like collecting in-game items, Valve will be giving away a "Souvenir MP5-SD | Lab Rats" to anyone with Prime status while earning 250XP in the Danger Zone game mode. That offer will run until January 9th, 2019 which is probably enough to give the game a little player boost. People do love their skins.

This is what I have been waiting for. An interesting Battle Royale game available on Linux with good support and since it's Valve it will no doubt work well on Linux. Not only that, it's likely going to actually be an active game, especially since it's free. I'm sure plenty of the existing CS:GO community won't be happy, but you never can please everyone. It's not like anyone's forced into it, the mode is separate to the rest of the game.

After playing a good few rounds—I like it. It's quite different to what's already out there, although CS:GO is showing its age a little. Even so, the mechanics seem to work quite well for it. I'm excited to see where they go with this, as they said they will continue to update it based on feedback.

See more on Steam and the official site for details. For info on the free to play status, see here.

I will have more on this in the coming week, frankly I'm too excited to keep typing.

We do often include affiliate links to earn us some pennies. We are currently affiliated with GOG and Humble Store. See more here.
About the author - Liam Dawe
I am the owner of GamingOnLinux. After discovering Linux back in the days of Mandrake in 2003, I constantly came back to check on the progress of Linux until Ubuntu appeared on the scene and it helped me to really love it. You can reach me easily by emailing GamingOnLinux directly.
See more from me
Some you may have missed, popular articles from the last month:
The comments on this article are closed.
65 comments
Page: «7/7

Quoting: devnullAre you kidding? There's be
en a tonne of content from maps to weapons. The lootboxes are all costmetic.

The game may look different, but its core mechanics are the same.

Yes, that's the point of CS:GO. Way back when CS:S was new, i remember many people talking about how it was shit and they wouldn't switch to it from 1.6.

CS:GO was marketed when it came out in a way that made it clear they wanted something that felt very similar to 1.6 and that pleased the pros.
1 Likes, Who?
« 1«7/7
While you're here, please consider supporting GamingOnLinux on: