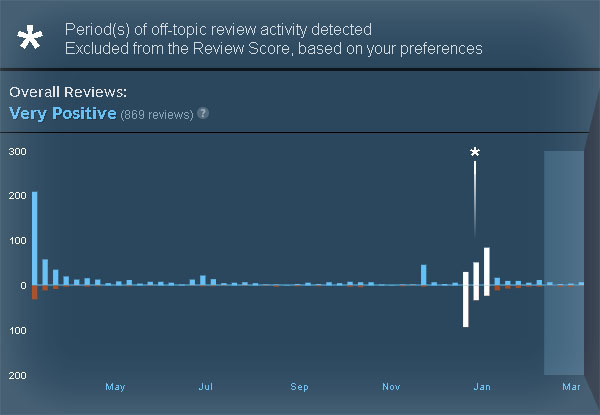 View PC info
This is definitely needed. Atm Beat Saber is being review bombed, because the mods broke with yesterday's update and people can't dowload songs for free and complain about having to pay for songs. m( (that's the facepalm smiley)

1. they could easily downgrade
2. mods will be upgraded
3. song creators want to be paid for their work

Those negative reviews aren't helpful at all... mods are modding the current code, of course they don't work with a different/updated code. Also, those mods are inofficial. And the game is still in early access, so updates are expected... oh man :-/
13 Likes, Who?

On the one hand, a bunch of entitled and over-excited little kids (or grown men who behave as such) going on some crusade because their favorite Youtuber told them to really doesn't help anyone. There's games that have years of work put into them and get absolutely panned for no reason. There's often no second chances and with smaller companies it can ruin them.

On the other hand, it's pretty clear to some of the big developers and publishers that they can't get away with some of the abhorrent business practices that they have been able to in the past. In these cases it's often companies throwing their toys out of the pram because they can't get away with carving-out content and charging for it later or pay-to-win nonsense or just making crappy generic games for a quick buck. It's no coincidence that the Epic Store et. al. don't have reviews. How pro-consumer.
11 Likes, Who?

View PC info
and what about this?? is valve going to throw complaints of DRM, and lock-ins down the carpet??

View PC info
DRM is the worst thing about Valve, I like Valve and their efforts on pushing linux gaming, I will keep on using it, but will keep complaining about DRM and lock-ins, because it's matter of property and a unfair system that wants to turn players into slave pets of the developers. My game, my binary I do whatever I please.

I comes to my mind the case of Shadow of war and micro-transactions, it was review-bombed because of that and developers decided to remove that "feature", not only that, but now the devs also removed Denuvo and the game is now playable on linux (w/dxvk). So no review bomb there, legit complaints about something morally arguable done by the devs. And you what? the review system worked just fine!


Last edited by Koopacabras on 16 March 2019 at 2:19 am UTC
5 Likes, Who?
Purple Library Guy 16 Mar, 2019
The approach seems like a pretty fair compromise. The reviews don't disappear, nothing's being censored. And, if you're the kind of person who thinks review bombing is often justified/relevant, you can turn the feature off.
16 Likes, Who?

View PC info
So if a game is buggy on release and immediately gets "review bombed" for it, you will not see any score at all for that time period? - Well, I guess no press is better than bad press... . On the other hand one wonders why publishers/developers complain about lack of exposure constantly then... . Or maybe creators/publishers of consumer content should try to not constantly find new ways to anger their customers.

I think the business looks at the reviews the wrong way. They are indicators that something is wrong with the product and needs to be changed. Hiding the reviews/scores does not help solve this problem.

Quoting: Purple Library GuyThe approach seems like a pretty fair compromise. The reviews don't disappear, nothing's being censored. And, if you're the kind of person who thinks review bombing is often justified/relevant, you can turn the feature off.

Yeh, I do think it's a mix, but it does seem to be the most fair attempt at a hands-off compromise I've seen thus far from anyone with half the investment, influence and control of valve. I actually think a better solution would be to consider this notion of "topic" more thoroughly, and work to make their system reflect legitimate consumer concerns. Since Steam hasn't even had a big problem with joke reviews, but gave users the option to mark them as such; "helpful", "unhelpful", "funny". I really liked the ability to mark them as "funny" ..what a great way to let a community be natural.

I think something as simple as labeling and sorting reviews would be best, and maybe less biased as pertains to importance. A 10 point system in categories could help a meta score as well, for things like graphics, sound, install experience, level of support from the dev- and most controversial of all, but should not be hidden by default: ethics. why not? Then you could have a metascore for gameplay AND consumer experience. But I don't make millions selling "privileges" to play games, so what do I know? *le shrug* :P''
1 Likes, Who?

And IMO the timing of this announcement and the recent Artifact news is noteworthy.
0 Likes
Mal 16 Mar, 2019

A sad day for consumers.
1 Likes, Who?

Huh? Why?
2 Likes, Who?
1/6»
While you're here, please consider supporting GamingOnLinux on: