GOG are having a big sale for French developers, plus recent releases of Eternam and Leo the Lion

Three bits of GOG news in one for you DRM-free shopping fans today, as not only are they doing a big sale they also recently revived two more classic games.

First up, the classic 1992 comedy adventure Eternam was released on GOG earlier this month. Little late on picking it up since the Linux build wasn't actually available right away but now it is. Next up is Leo the Lion (original Polish name: Lew Leon), another retro classic action-platformer from 1996. GOG just released it today!

GOG are also doing "The Baguette Days", a week long sale to celebrate some fantastic French titles. Some good Linux picks are in there like:

In their French classics selection you can also find Arx Fatalis (67% off) to use with the open source Arx Libertatis game engine, along with 75% off Another World: 20th Anniversary Edition. The rest of the classics aren't on Linux.

Article taken from GamingOnLinux.com.
Tags: DRM-Free, Game Sale, GOG, New Release
10 Likes, Who?
We do often include affiliate links to earn us some pennies. We are currently affiliated with GOG, Humble Store and Paradox Interactive. See more here.
About the author - Liam Dawe

View PC info
They have a discount on Helium Rain too. ^_^
1 Likes, Who?

View PC info
Happy baguettes sales to all of you. 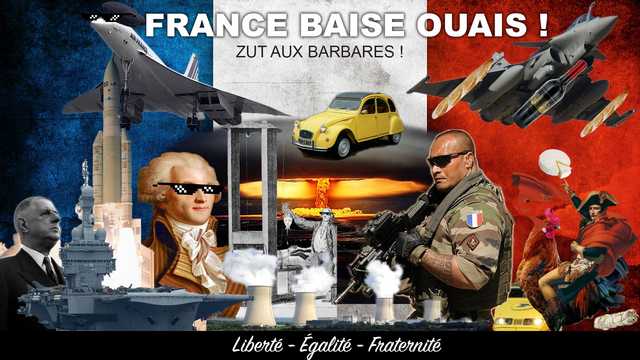 This meme is tasteless and yet so accurate to what the 14th of July is all about in France ...
A bunch a pro military twats flaunting their military dick in everyones faces "in the name of national pride" ...

'Dirty bread' to all of us? What's that supposed to mean?

View PC info
I dunno but that ugh.. poster literally says "France fuck yeah !" and my guess is it is parodic.
0 Likes

Quoting: DedaleI dunno but that ugh.. poster literally says "France fuck yeah !" and my guess is it is parodic.

Quoting: DuncWhat's a Bristol 223 doing on there? :P

Such a shame to not have this beautiful plane in activity anymore.
0 Likes

Quoting: DedaleThey have a discount on Helium Rain too. ^_^

It's a big up, the devs work on Ubuntu and even the not supported AMD graphical cards had a bit of backup from the devs.

I was stuck with no lightning in the game, and while they couldn't back it up, they gave some good pointers to get it working.
0 Likes

Quoting: DedaleThey have a discount on Helium Rain too. ^_^

Ooof, how did I miss that. Added.
0 Likes
1/3»
While you're here, please consider supporting GamingOnLinux on: