Valve have officially announced that the Beta for the overhaul of the Steam Library is coming on September 17th. Valve did a demo to some press outlets recently in a closed-doors session and now they've formally announced it.

This is something Valve have been working on for a long time and it is absolutely needed. The current Library feature of Steam is incredibly simplistic and when you've built up a bigger amount of games it's so a bit useless really.

Most of what's coming we already knew about, especially since you could actually try it out back in June thanks to a previous leak. From what I checked out personally, it was a huge improvement in just about every area of the Library system. 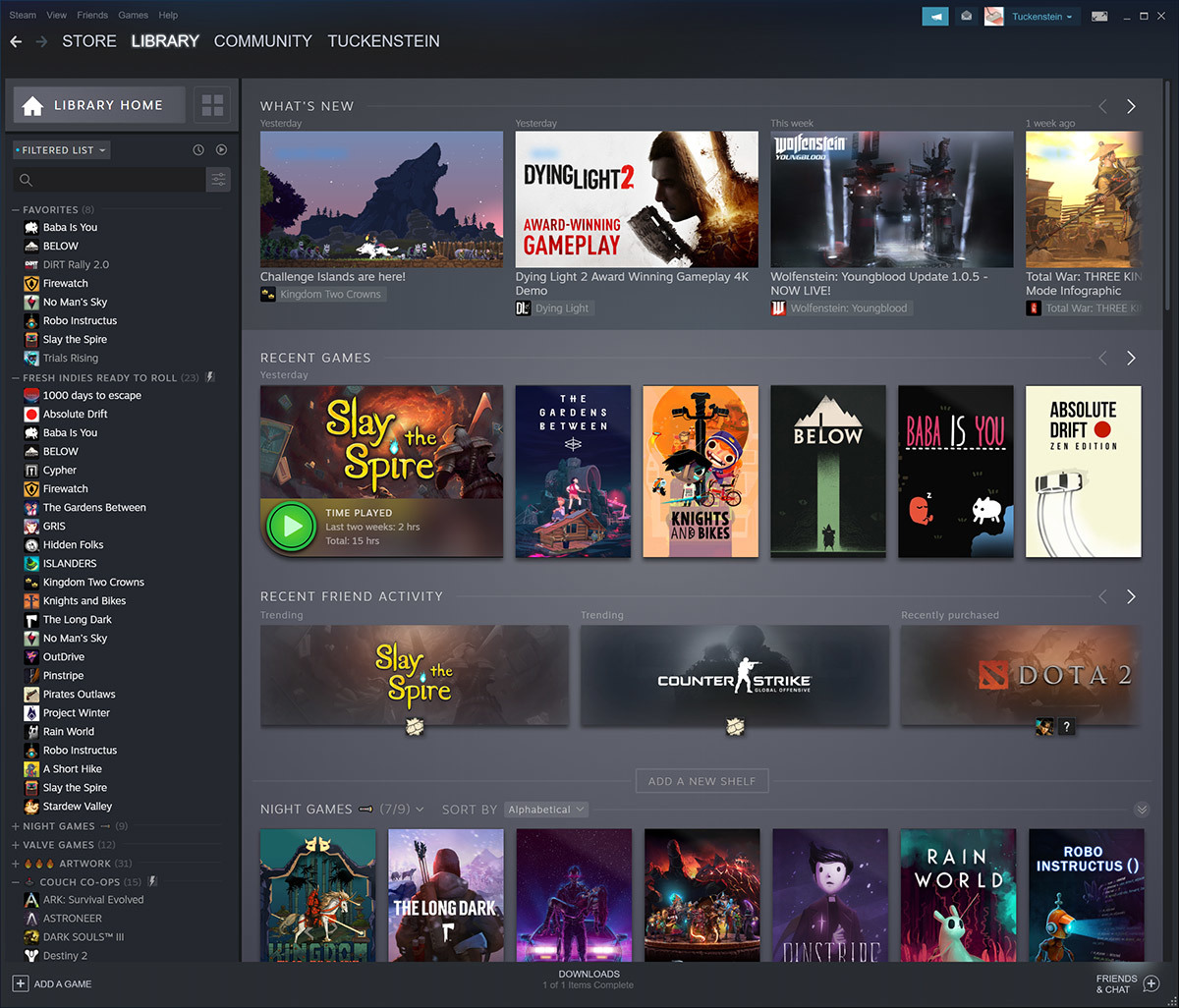 Seeing what games have been updated easier and the new events system should be interesting, giving developers a new big way to hook players back in. Valve said that today developers will have access to the tools required to make the events so they can be ready. More about the Events stuff here.

I'm most excited about the Collections feature, a much expanded version of the current and simplistic category system. Allowing you to do filters on features available and the genre, to have them pull in games that apply over time as you buy more, it is pretty sweet.

See the full announcement on a special page here. Valve said more info will come before the Beta starts.

There's also some new experiments coming to Steam Labs, like "Deep Dive" based on the Steam Diving Bell prototype from developer Lars Doucet (Tweet) which looks interesting. I just hope Valve actually get around to adding an Operating System platform filter to their experiments, as it's assuming everyone is on Windows right now for all of them. The Interactive Recommender for example, shows me tons of Windows games even though I only have Linux ticked in my Steam preferences.

Update: Also, it doesn't seem to have been announced anywhere I could see but it seems Valve are also doing some tweaks to store pages which seem to be live now. Here's a comparison:

The cover image on the news item gives it a bit more attention, it also seems it can be animated. You can hover over to get an excerpt too:

When you click on it it, you're given an overlay instead of a new page too like below:

However, if you're now directly linked to an update the whole layout has changed too. Here's how, click to enlarge the pictures: 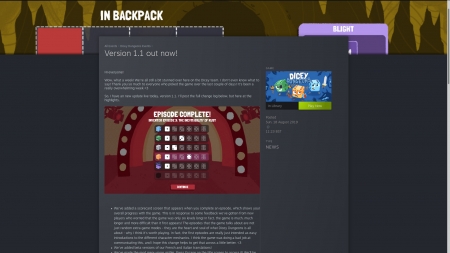 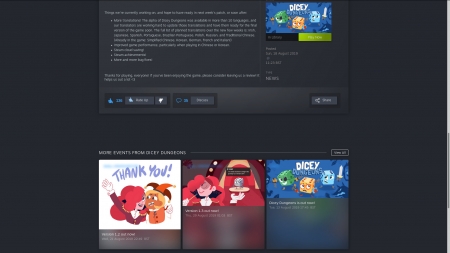 Valve did say some of the new tools were rolling out for developers today, so this seems to be part of it. Since the new Steam Library design will show the "What's New" section (first image at the top), it's likely being shared here.

Update #2: Valve confirmed in an email to GamingOnLinux that the Steam Library Beta will be available through the usual opt-in Steam Client Beta and it will go live for all platforms (Linux included).

I am the owner of GamingOnLinux. After discovering Linux back in the days of Mandrake in 2003, I constantly came back to check on the progress of Linux until Ubuntu appeared on the scene and it helped me to really love it. You can reach me easily by emailing GamingOnLinux directly.
See more from me
Some you may have missed, popular articles from the last month:
The comments on this article are closed.
25 comments
Page: «2/3»
Purple Library Guy 4 Sep, 2019

Quoting: TheSHEEEPI hope it will let me disable that "recent news" section (or it will be gone altogether), as all that gets filled with is "quality journalism" from RPS and the likes.

IIRC the auto-aggregation of news will be totally gone in the new client, because it inadvertently promoted Epic news in the recent times.

Hopefully Valve will tweak the store as well.

I have "Show Virtual Reality content" unticked (i.e. do not show), but I still get VR-only games showing up in Featured & Recommended, Special Offers, and my Discovery Queue; the Virtual Reality category is still featured in "Browse Categories" and in the Games drop-down menu, the Valve Index and HTC Vive are still featured in the Hardware drop-down menu, and there is still a Valve Index banner on the store homepage. I also still see VR-only games (e.g. Serious Sam 3 VR: BFE, The Talos Principle VR, etc.) when browsing all products despite other titles being successfully excluded when browsing all products based on my preferences (VR hardware also shows up). VR is not something I want promoted to me; if I found it more compelling in the future then I would tick (i.e. select) "Show Virtual Reality content", if that setting actually functioned as I expected it to. Currently unticking it seems to do little to nothing in terms of hiding Virtual Reality content.

I realize Valve is heavily invested in VR hardware (the Index) and its upcoming VR games, as well as multiplayer-only games (e.g. Dota 2, CS:GO, TF2, etc.), but I would like the ability to filter these categories out if I so choose.

As for Steam Labs, I hope the Interactive Recommender also sees some improvements. It doesn't seem very reactive to my changes in gameplay or able to strike a good balance between genres I typically enjoy. For example, I have more hours (that is an understatement) per game invested in RPGs than platformers, but that is due to the nature of the games (unless you don't care about side quests and lore, RPGs typically require more time investment to fully flesh out the game world, whereas platformers aren't typically as expansive and dialogue tree laden). The Interactive Recommender isn't adequately reflective of the games in my library (both played and yet to be played), the number of games I have played per genre, or the recency of my play (e.g. maybe I'm playing more FPS games at the moment). Hours played seems to override everything else; this along with the tagging system ends up skewing results. E.g. I get a lot of point-and-click adventure games and hidden object games recommended because most of the RPGs I've played are tagged "Adventure" (or maybe the majority of RPG gamers are prodigious consumers of point-and-click adventure games and hidden object games, and that's why I get these recommendations). I don't want to have to exclude certain games (e.g. RPGs I have the most time invested in), as I am still interested in recommendations for those types of games as well, I just want more relevant recommendations (e.g. I am not a potential buyer of hidden object games) and a better mix/balance in the recommendations.

View PC info
I wish steam had something like http://lorenzostanco.com/lab/steam/ built-in; It seems we're getting close
3 Likes, Who?

Most free-to-play games I've installed don't remain listed in my library once I've uninstalled them (e.g. Doorways: Old Prototype, Sigils of Elohim, What Never Was, etc.), unless they have some sort of monetization involved (paid DLC, microtransactions).

After having previously claimed a license for a free-to-play game (by clicking "Play Game" on its store page), if I return to its store page once the game has been uninstalled, the page will state that the game is already in my Steam library, but the game won't actually be listed in my Steam library until I reinstall it; uninstalling it again will remove its library listing again.

Does the Steam library overhaul allow free-to-play games to be listed in one's library when they are uninstalled (without needing to hide them to achieve this)?

View PC info
It looks quite nice, though I have just started using Lutris as my all in one game launcher, just as I can access my Steam, GOG, WINE based launchers / games from one front-end along with configuration for them easily.
0 Likes

View PC info
Seems things are not quite working for me with the "updates overlay" on the site. Nothing on there is clickable for. Neither the discuss button, nor the social media links do anything other than closing the overlay.
0 Likes

Quoting: EhvisSeems things are not quite working for me with the "updates overlay" on the site. Nothing on there is clickable for. Neither the discuss button, nor the social media links do anything other than closing the overlay.

Yeah it seems they are still updating it. Yesterday it had a scrollbar of its own, today it shares the main page scrollbar and I also cannot click on anything...oof.
0 Likes
«2/3»
While you're here, please consider supporting GamingOnLinux on: