UnCiv, a free and open source remake of Civilization V

What do you do when you want to keep the mechanics of a game you love alive? If you're developer Yair Morgenstern, you remake it yourself like they did with UnCiv.

A remake of Civilization V, although it looks nothing alike as it's gone for a much more retro pixel-art like style it's supposed to follow the same game mechanics. Much like the classic Freeciv which is based on earlier rules and features. 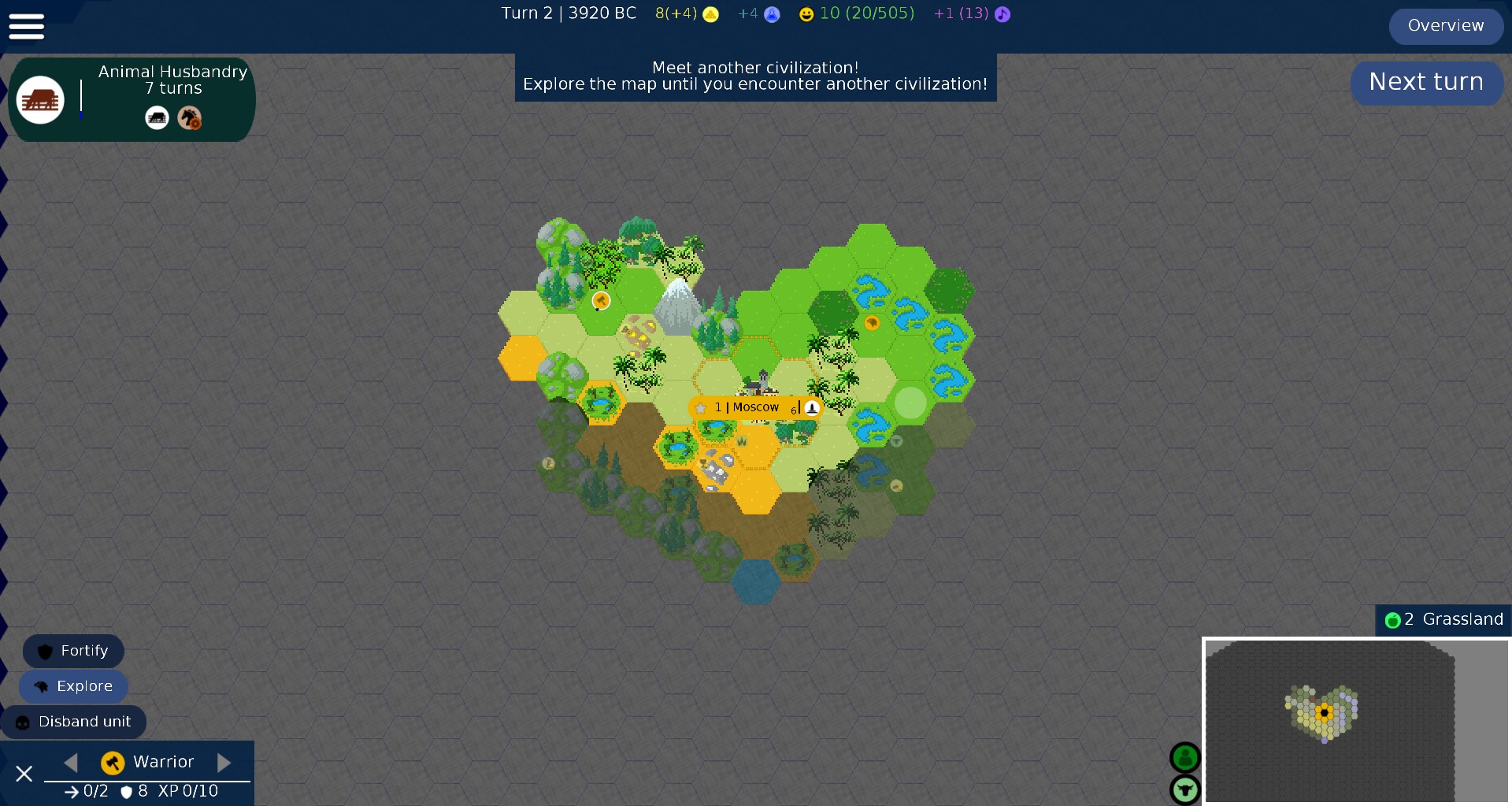 Available for both Android and PC, you can clearly see with it needing a few adjustments to look good on PC. Only in the last few months has the developer actually started bundling PC release files with it, so hopefully if it becomes a bit more popular and/or pulls in some help, it can get an improved flow for PC players. Playable though and always fun to see more open source strategy games appear.

They do have a lot of plans for the project including user interface improvements, city-state quests, adding in missing civilizations, religion, trade routes and so on.

I am the owner of GamingOnLinux. After discovering Linux back in the days of Mandrake in 2003, I constantly came back to check on the progress of Linux until Ubuntu appeared on the scene and it helped me to really love it. You can reach me easily by emailing GamingOnLinux directly.
See more from me
Some you may have missed, popular articles from the last month:
The comments on this article are closed.
44 comments
Page: «5/5

View PC info
No game in the official series ever got combat right. Death-Stacking was just as ridiculous as what a poster farther up called "parking lot logistics", when a unit cannot even pass through an occupied hex.

The one game that got it right was Call to Power. You could build armies up to a limit of 12. There were significant ranged options. And no, you didn't lose the -entire- stack when one unit got defeated (which is also beyond silly). They'd actually fight at once vs the other enemy stack of 12.

I have NO idea why Sid Meier didn't lift the idea for the official franchise. It's clearly superior to anything they ever did. Call to Power 2 would be the civ game I play, would there be a modernized version of it.
0 Likes

View PC info
Ultimately it's simply down to a difference in opinion with regards to the combat in Civ 4 and 5/6. What I enjoy most about Civ 4 is the depth, balance and how hard it is on the higher difficulties. For me, it simply was a whole ton more fun to play than Civ 5. And since I've played it competitively, such things matter too. Winning on Deity and even Immortal is far from trivial in Civ 4, which means the game has been fun to play for me for years on end. For others it can be different of course.

Quoting: PangaeaUltimately it's simply down to a difference in opinion with regards to the combat in Civ 4 and 5/6. What I enjoy most about Civ 4 is the depth, balance and how hard it is on the higher difficulties. For me, it simply was a whole ton more fun to play than Civ 5. And since I've played it competitively, such things matter too. Winning on Deity and even Immortal is far from trivial in Civ 4, which means the game has been fun to play for me for years on end. For others it can be different of course.

I played a lot of Civ in my life, mostly single player, or on lan, never on the internet. I almost always played as peacefully and even separated from AI civs as possible, always looking for science victory, because I was never able to connect to religions in Civ (used it for happyness mainly where this applied), and I also never liked the united nations systems too much, where they seemed to decide that you lose or win "the game" some sunny day...
My problem right now is to keep my experiences from 4 and 5 separated. It's been years since I played "Beyond The Sword". I remember loving the introduction of hex tiles, and the end of deathstacks in Civ5.
Civ5 was something that I seemed to be unable to control as much as I wanted. I had the impression that I had to decide too early for a specific philosophy of play, that I had to specialize too much..
Now with Civ 6 (having 2 expansions, and knowing a lot more of the game), I fell in love with Civ again. The systems seem clever and transparent to me. I can (and have to to be efficient) plan my cities districts to an extent, that has never been there in any civ game. Tile improvement in the early ones was made out of muscle memory, the it became more complex, but still based on maxing out the improvements you have decided for. Now it's planning what and where, and that even with regards to neighbour cities.
Of course it's not a perfect game. There are things to unlike. But I don't regard it as dumbed down.
To back my impressions up (or throw them out the window), and fueled by the comments in this thread, I decided to revisit Civ4 and 5 in the near future.