Vulkan 1.2 pulls in 23 extensions into the core of the Vulkan API, bringing access to new hardware functionality, the possibility to improve performance and more. There's a lot of excitement around it, with multiple companies giving their support in the official press release here like Google for Stadia, Stardock Entertainment, NVIDIA, AMD, Arm, Intel and more.

"Vulkan 1.2 brings together nearly two dozen high-priority features developed over the past two years into one, unified core Vulkan standard, setting a cutting-edge bar for functionality in the industry’s only open GPU API for cross-platform 3D and compute acceleration," said Tom Olson, distinguished engineer at Arm, and Vulkan working group chair. "Khronos will continue delivering regular Vulkan ecosystem updates with this proven, developer-focused methodology to both meet the needs and expand the horizons of real-world applications." 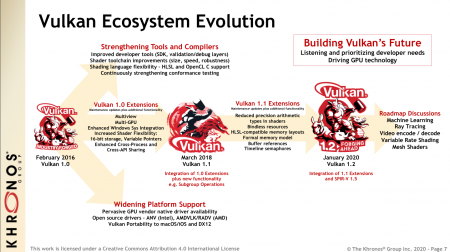 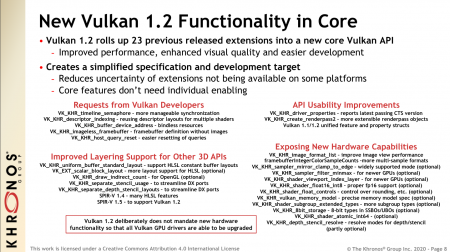 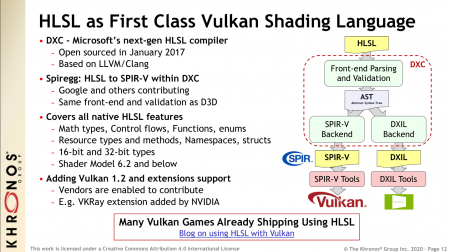 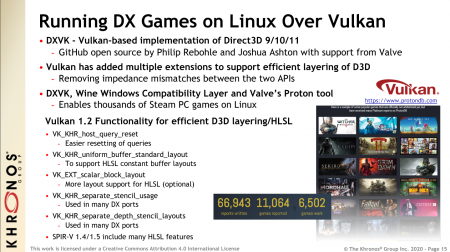 Slides from their Launch Presentation.

The good news is that all existing GPUs that support Vulkan are capable of supporting Vulkan 1.2, ensuring no one gets left behind by it. The Khronos Group said that AMD, Arm, Imagination Technologies, Intel and NVIDIA all have Vulkan 1.2 implementations passing the Khronos conformance tests. You can follow their Vulkan 1.2 release tracker here.

NVIDIA, as expected, already have a brand new Vulkan Beta driver out for Linux at version 440.48.02 which pulls in Vulkan 1.2 support. This driver release also adds PRIME Synchronization support for Linux kernel 5.4 and newer.

AMD (RADV) and Intel (ANV) have their changes pulled into Mesa, ready for the next big open source driver release there for Mesa 20 which should be sometime in February/March.

We do often include affiliate links to earn us some pennies. We are currently affiliated with GOG and Humble Store. See more here.
About the author - Liam Dawe
I am the owner of GamingOnLinux. After discovering Linux back in the days of Mandrake in 2003, I constantly came back to check on the progress of Linux until Ubuntu appeared on the scene and it helped me to really love it. You can reach me easily by emailing GamingOnLinux directly.
See more from me
Some you may have missed, popular articles from the last month:
The comments on this article are closed.
14 comments
Page: «2/2

Quoting: Comandante ÑoñardoAnd... there is a new Nvidia driver in the Ubuntu ppa

Wait, what? A Vulkan Beta driver in the PPA. First time that has ever happened and I'm wondering if this wasn't a mistake.
2 Likes, Who?

Quoting: Comandante ÑoñardoAnd... there is a new Nvidia driver in the Ubuntu ppa

Wait, what? A Vulkan Beta driver in the PPA. First time that has ever happened and I'm wondering if this wasn't a mistake.

Or maybe they are improving the work with Ubuntu.
Changelog

View PC info
Just did a quick test, but the new Vulkan beta does not fix the recently introduced VR issue.

View PC info
The new stable driver is 440.44... Yesterday, I tried running Shadow of Mordor's Linux Vulkan beta... Nope! Won't start. I get the loading ring on the black background, but it freezes dead at some point. Reverted to 435.21... No problem if not for the fact that my GTX 1660 Super is not recognized by this driver version.

Anyone else with this issue?
0 Likes
«2/2
While you're here, please consider supporting GamingOnLinux on: