What was originally supposed to launch last month, the Steam Soundtrack Sale is now live as Valve celebrate the new feature of the Steam store and client dedicated to Soundtracks.

As a brief reminder, for developers who do upgrade their DLC to a Soundtrack it means that people can purchase it and download without needing the whole game. It's a nice touch and a much better way to do it, might even give developers a boost in sales. Having a dedicated music folder is nice so you don't need to hunt down inside each game to find the files. Anyway, it's a massive improvement on the old system and shows how Valve keep improving for the benefit of users. 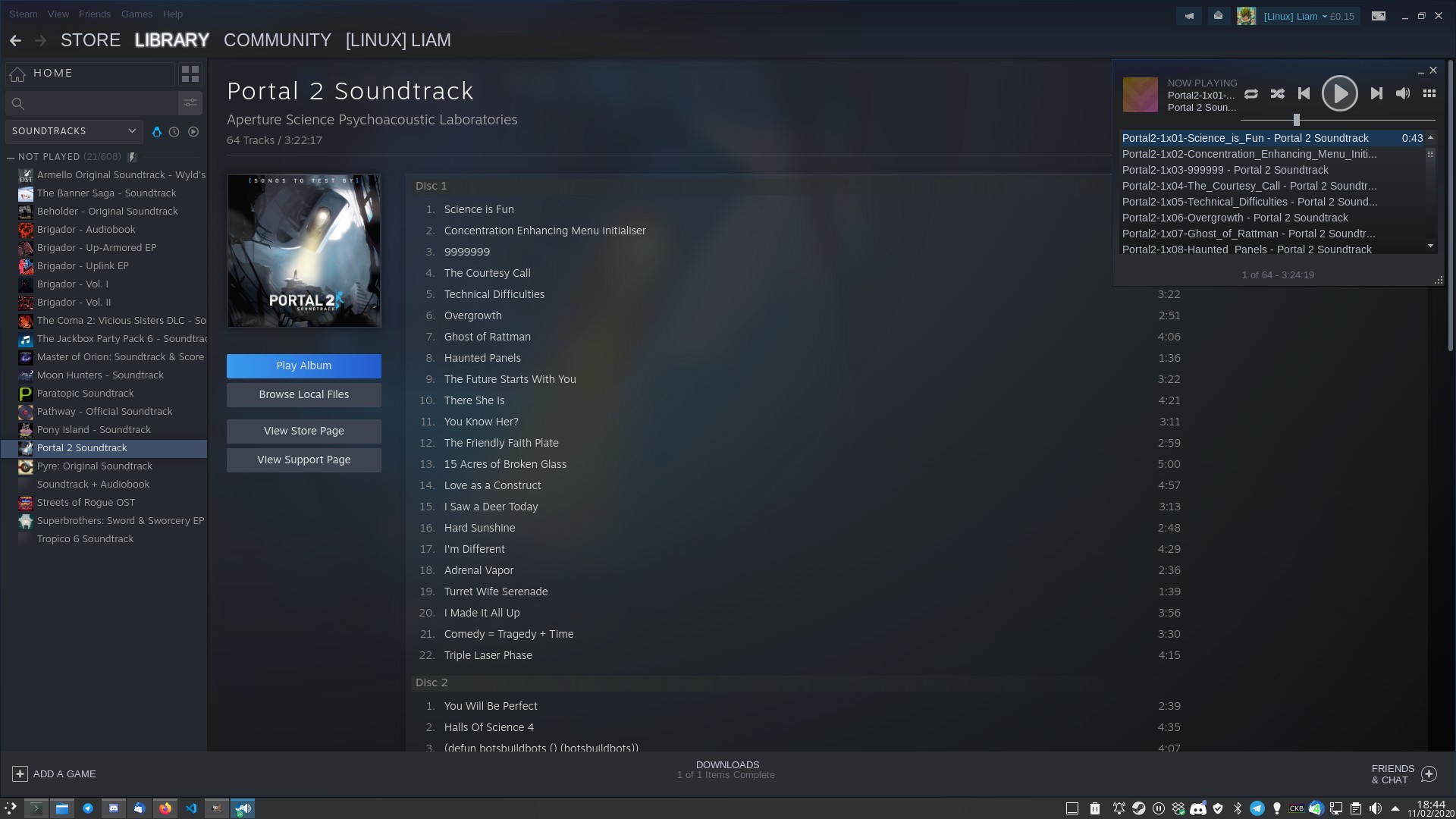 There's an issue with the new system though if you're on the Linux Beta client, as the Play Album button doesn't work which might be linked to a recent issue I reported where the Manage Screenshots button doesn't work. If you see that issue, reverting to the normal Steam client will fix it. Hopefully Valve will fix that before the current Beta updates go live for everyone.

What are some of your favourite game soundtracks? Give your fellow GOL readers some suggestions on what to pick up in the comments. Steam already has well over 900 DLC converted to this new format, so there's a huge amount to pick from.

If you want to just play around with it soundtracks from multiple Valve games are free including Portal, Portal 2, Half-Life, Half-Life 2 and more.

You can see the deciated sale page here.

I am the owner of GamingOnLinux. After discovering Linux back in the days of Mandrake in 2003, I constantly came back to check on the progress of Linux until Ubuntu appeared on the scene and it helped me to really love it. You can reach me easily by emailing GamingOnLinux directly.
See more from me
Some you may have missed, popular articles from the last month:
The comments on this article are closed.
21 comments
Page: «2/3»
toojays 12 Feb, 2020

A couple of my favourite soundtracks:

My personal favorite soundtrack is the one from Shatter. I like to put it on while walking and let it pump me up.
0 Likes

View PC info
Seasons After Fall has a seriously amazing soundtrack, done almost entirely by a string quartet utilizing all kinds of "extended technique" to get some really interesting and unusual sounds out of the instruments. Can highly recommend as a lover of both classical music and video game soundtracks. :D

Stardew Valley's is also really good. Surviving Mars was surprisingly good for listening in the background while being creative (and I love how almost all the tracks are named after chemical elements or substances). Thomas Was Alone has some haunting and really enjoyable bits. I like Paradox grand strategy game soundtracks typically as well, pretty much anything by Andreas Waldetoft. The Team Fortress 2 soundtrack has some great work, though I wish they'd update it with the music from Jungle Inferno. Oh yeah, the Octodad: Dadliest Catch soundtrack has some interesting stuff including remixes of songs that aren't found in-game.

I've got soundtracks for several other games, but these are the ones I typically tend to listen to more often.

View PC info
I think the soundtrack of "Faster than Light" is an amazing piece of art with it's careful sound variations of simple tunes but it's maybe not for everyone.

Also: Valve should add the soundtrack feature to their mobile app to listen to them on the go without hassle.
1 Likes, Who?

View PC info
I think the new soundtrack feature is great, Steams music was a mess before (forcing to install the game, music files scattered amongst game files etc...)

Many soundtracks though are still listed on Steam just as DLC, I guess it will take some time before devs re-list/re-categorize them on Steam.

Comandante Ñoñardo 12 Feb, 2020
View PC info
I wonder if the licensed songs in videogames are included in their soundtracks.
0 Likes
BOYSSSSS 13 Feb, 2020

View PC info
Dammit, can't buy Stories Untold Official Soundtrack because I don't own the game and the Soundtracks are still DLC, and the sale end tomorrow...

Quoting: BOYSSSSSDammit, can't buy Stories Untold Official Soundtrack because I don't own the game and the Soundtracks are still DLC, and the sale end tomorrow...

Lol, it seems Steam is not the best place for that, and really that's just not because I don't buy games on it.
I don't buy OST on GOG either, I don't want to put all my eggs in the same basket.
0 Likes

View PC info
Puzzled about why so many soundtracks on Steam are still tagged as DLC, I mailed an indie publisher about this. I assumed that they just had missed the memo, and therefore not ticked a box on Steam to flag them as Soundtracks.

But the response I got was basically that the new soundtrack feature has some problems and many devs struggled with it. And the feature is designed to offer additional high-quality audio files they didn't have. So they decided not to rush it, but are going to make the shift eventually.

So hmm... I guess maybe Valve has set some basic rules about the Soundtracks now. Perhaps there are guidelines on file naming/tagging, cover images, and codec formats/quality. I definitely would welcome that change...

The "DLC" that has been re-listed as soundtracks appear to be much more organized. For example, the Resident Evil 7 soundtrack now comes in 5 formats, and all of the tracks are properly named and tagged. And with a good quality album cover image.. this was not the case previously.
5 Likes, Who?
BOYSSSSS 14 Feb, 2020

View PC info
There's also the problem with the Soundtrack DLC being part of Extras DLC with additional art and footage. I guess they will have to split the DLC in two, Soundtracks and Extras.
0 Likes
«2/3»
While you're here, please consider supporting GamingOnLinux on: