Although there isn't much more context, given the title's incredibly short length, the plot of Discover my Body takes place twenty years in the future, in a dystopian society where a strange medical procedure was developed to enhance human consciousness, which is being used by people to escape their miseries and existential despair. You play as a medical student who will be examining this process on the character that you'll be interacting with, and for that purpose, you'll be assigned a scanner to look for and inspect specific instances of the procedure's evolution on this patient's body.

I must confess that I "hated" this guy for all his deviancy. It's one of those characters that you would like to stab repeatedly, only to find out that it's futile, because he would be enjoying the torment. And while you might think that I disliked the game because of this fact... on the contrary! It's the living proof that the developer got it right. Apparently reminiscent of David Cronemberg's horror filmography, Discover my Body is a title that with incredibly minimal elements manages to feel nihilistic and repulsive, and while you never get to see it, you won't help but imagine how horrific and miserable that futuristic world must be, with any remnant of human dignity and decency absolutely obliterated. 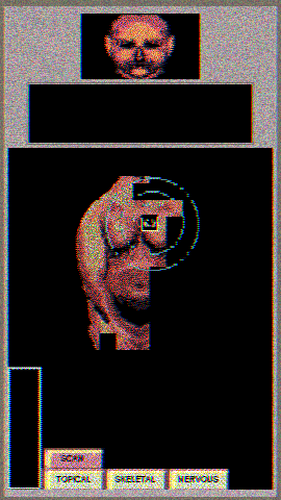 There are two issues to mention, though: the first one is the small window where the game is executed. Basically, you can't go fullscreen, so if you aren't using a dark background then your immersion may be considerably compromised. And secondly, most likely you'll inevitably think at the end: "Is that all? I wanted to see more!". This is due to the minimalistic gameplay and the fact that, objectively speaking, the procedure that is depicted is shorter than expected, so the ending feels very abrupt. At least that's how I felt, and while I can't say that I was amazed by this minigame nor can I assure you with full certainty that you'll like it, I do think its premise has a lot of potential, therefore if the developer manages to keep the vision and perspective for future releases, we might be up for a very interesting and original saga. Even more, considering the tone established, there could be room to feature philosophical, bioethical and even political considerations without making them feel forced or pretentious.

You might be thinking why I'm allowing myself to speculate so much, and that is because after the positive reception the title had among the users who tried it, there is already a sequel on the works. Also, the developer can be seen being very responsive to people's comments and feedback, so if you want to request him to keep Linux support or suggest features that you'll like to see, along with Twitter he has a CuriousCat account where you can contact him.

One final but important note regarding the support on our platform, which was posted on the store page:

Article taken from GamingOnLinux.com.
Tags: Free Game, Horror, Indie Game, Itch.io, Point & Click, Short
5 Likes, Who?
We do often include affiliate links to earn us some pennies. We are currently affiliated with GOG, Humble Store and Paradox Interactive. See more here.
About the author - Sunburst

My articles aim to be a small contribution in that sense, by giving these hidden gems some of the exposure they deserve.
[code][/code]
See more from me
Some you may have missed, popular articles from the last month:
14 comments
Page: «2/2

View PC info
Despite my grumblings that tooling can't do things better, I strongly suspect many troubles go unreported because people just find a way to make it run and go from there.

The #1 issue is something you probably don't want to get involved with right now, and if creating a few symlinks gets it running on non-Ubuntu (or perhaps even non-Debian based) distros, then that's going to be good enough. Concentrate on game first, improving build systems for less common distros second (or third, fourth...or really somewhere very, very far down the list).

The issues I face anyway are that Gamemaker is building against specific minor version of libraries (I guess those on Ubuntu 16.04), and so expecting very explicit names when loading dynamic libs. Future updates to Ubuntu might change them, and other distros have different versions, or different names even (as is the case for libcrypto-gnutls). There's not really any easy way to fix that, for some definition of "easy", hence why I say: if it works with Ubuntu, then carry on, and cheers for the build!

Interesting? Disgusting? Weird? So glad I played it!
0 Likes

Matombo 30 March 2020 at 12:07 pm UTC
View PC info
For People where the game doesn't start: I use Manjaro and i had to install openssl-1.0 and libcurl-gnutls (pacman -Fx helped me find the packages).
1 Likes, Who?

MatomboFor People where the game doesn't start: I use Manjaro and i had to install openssl-1.0 and libcurl-gnutls (pacman -Fx helped me find the packages).

Thank you for that. I had been searching for those but Pacman wasn't finding them. By copying and pasting exactly as you had them typed I was able to. I'm not sure why Pacman didn't think to bring up openssl-1.0 when I typed in SSL or openssl but all's well that ends well. Game works on Manjaro for me now as well.

YamesHi, I made "Discover My Bodies", someone alerted me to this article from my CuriousCat. first off, thank you so much for featuring my game. Secondly, I've been trying to get feedback on the Ubuntu build, I have seen that people have downloaded it for Ubuntu (and hoped that no news was good news) but this is the more or less the first I have heard of people experiencing trouble getting the game to run. I'm not super experienced with Linux but I thought I would take a shot at building for Ubuntu using this guide, which I am posting for the sake of clarity (https://help.yoyogames.com/hc/en-us/articles/235186168-Setting-Up-For-Ubuntu).

One thing the article makes explicit is the need for these dependencies on the user's end:
libcurl4
libopenal1

This may be a moot point, just thought I would point it out again considering the that these instructions are sort of toward the bottom of the page/not immediately apparent on Discover My Body's itch.io page. The one previous instance someone mentioned a libcrypto error code to me regarding the Ubuntu build, they did not have the required dependencies. I was hoping to hear back from them confirming that they installed them and that the game was working, but they are away from their Linux machine now because of the pandemic

It may be the case that the game can only run on Ubuntu, if so, please let me know so I can more prominently specify that on the game's page. Thanks.

I can say that I have gotten the game to run on Trisquel; Manjaro; and Linux Mint. Trisquel and Mint required me to do nothing but run the game normally without installing anything extra. On Manjaro I had to install dependencies. Trisquel and Linux Mint are both based off of Ubuntu which is based off Debian so in my experience anything Debian based should be a smooth experience out of the gate as the dependencies seem to be already installed by default.