Just like Valve said to us they would do so, Half-Life: Alyx is now available on Linux using the Vulkan graphics API. This arrives as part of a big update that went out today which also brings in modding tools and Steam Workshop support, it's going to be very fun to see what the community comes up with for Half-Life: Alyx.

Half-Life: Alyx is Valve’s VR return to the Half-Life series. It’s the story of an impossible fight against a vicious alien race known as the Combine, set between the events of Half-Life and Half-Life 2. Playing as Alyx Vance, you are humanity’s only chance for survival. 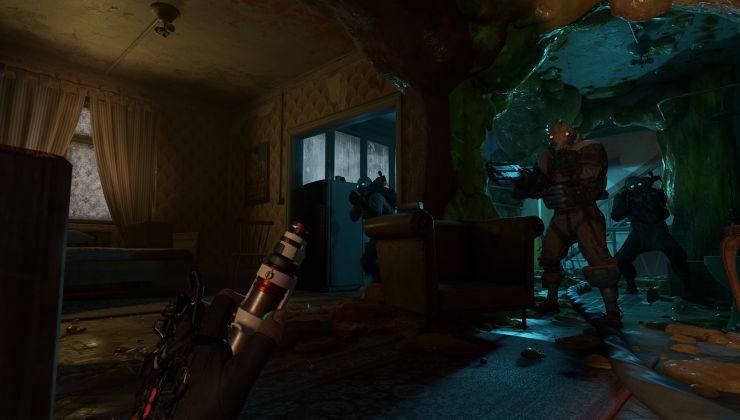 For the modding side Valve released new versions of Hammer (the Source 2 level editor), a Material Editor, a Particle Editor, Source Filmmaker and more for people to tinker with. However, these tools are usually only available on Windows. Valve did say this is only the first Beta of the Alyx Workshop tools suite though, so we may see support for that too properly in future.

If you previously used the Proton compatibility layer to play Alyx, Valve said to follow these steps to reset it to the new Linux supported build:

For the Linux version, Valve are recommending an AMD GPU with the Mesa RADV driver for "best results". It may seem like Valve are giving NVIDIA the cold shoulder here but on Linux NVIDIA are missing some big quality of life features for VR. It will work with an NVIDIA GPU but the experience might not be great.

Really fantastic to see such continued Linux support from Valve. It was only earlier today in our round-up article that we listed it as an interesting upcoming game!

You can find Half-Life: Alyx on Steam, it requires a VR headset.

We do often include affiliate links to earn us some pennies. We are currently affiliated with GOG and Humble Store. See more here.
About the author - Liam Dawe
I am the owner of GamingOnLinux. After discovering Linux back in the days of Mandrake in 2003, I constantly came back to check on the progress of Linux until Ubuntu appeared on the scene and it helped me to really love it. You can reach me easily by emailing GamingOnLinux directly.
See more from me
Some you may have missed, popular articles from the last month:
The comments on this article are closed.
52 comments
Page: «3/6»


QuoteI'm really pleased with how the Linux version runs on AMD RADV where we have async reprojection in SteamVR via a high priority compute queue. We look forward to getting that on NVIDIA but are awaiting driver support, so for now we recommend mesa/AMD.

I'm guessing that refers to VK_EXT_global_priority. Valve were involved with adding that to the Vulkan spec, RADV, and AMDGPU back in 2017.

View PC info
That was fast.
Next I need the VR set for this.
And I'll wait that game becomes cheaper.
1 Likes, Who?

Quoting: anthI'm guessing that refers to VK_EXT_global_priority. Valve were involved with adding that to the Vulkan spec, RADV, and AMDGPU back in 2017.

I think we should take a moment here to appreciate the power of free software/open source. If AMD were locking down their drivers the same way Nvidia are it is possible we wouldn't be able to play this game today because we would have to wait for driver support from AMD too.

You hear that Nvidia and everyone else only making proprietary drivers? By allowing cooperation your products are made better.
3 Likes, Who?

View PC info
One of my friends reckons that Half Life: Alyx is the best game he's ever played. He does play on Windows though, and has plenty of money to waste on VR equipment.
2 Likes, Who?

View PC info
I was waiting (this moment ?) to invest into VR hardware. Do you think it is now a good moment to start playing VR on Linux without having to tweak things to play ?
1 Likes, Who?

I was expecting problems since it says it works better on AMD. But i'm really surprised, it works pretty the same as on windows, 0 reprojection at all. Only some stuttering while loading. Rest was working flawless. I didn't tried linux for VR for really long time, and steamVR now is ages from it was a pair of years ago :D now is just increible playable. I just entered to test it, and i have been playing for 3 hours XD I'm happy with this results ;D

ironhead 16 May, 2020
View PC info
Damn, was waiting for native Linux support because of some graphical glitches I experienced the middle of HL:A (which I feel kill the immersion). But I have a nvidia card, so let's see how bad it is...
0 Likes

View PC info
wohoo, it was really hard but i wanted to wait for this :D
Time to finally try out alyx

View PC info
I had no interest in VR until seeing gameplay videos of Half-Life Alyx, because the shooting parts of it reminded me of classic on-rails light gun shooters. The appeal to me is aiming like a gun with a controller. Seriously I love classic light gun games like House of the Dead, Time Crisis, Space Gun, Mad Dog McCree, and Duck Hunt. A good on-rails VR shooter would have a lot of appeal to me.

I just duck²god this and looks I'm not the first one to have thought of this. I have to do some further research on if the index controllers can be used with emulators for old light-gun games, perhaps some people here already tried it? :)
0 Likes
« 1«3/6»
While you're here, please consider supporting GamingOnLinux on: