Need to tweak your Steam Achievements? Perhaps a game doesn't correctly unlock them or you want to start fresh again on a game - SamRewritten can help you do that. It's an open source Steam Achievements Manager for Linux and there's a new release out recently. 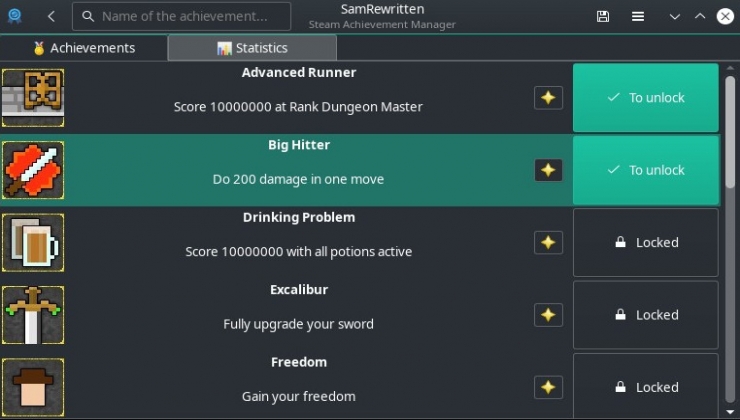 If you do intend to use it, the usual applies with external tools that hook in with Steam, it's all done so at your own risk. I've never heard of anyone having an issue though, and since you can unlock achievements so easily it would seem pretty odd if Valve ever actually intervened.

I am the owner of GamingOnLinux. After discovering Linux back in the days of Mandrake in 2003, I constantly came back to check on the progress of Linux until Ubuntu appeared on the scene and it helped me to really love it. You can reach me easily by emailing GamingOnLinux directly.
See more from me
Some you may have missed, popular articles from the last month:
23 comments
Page: «3/3

Quoting: FlabbBasically, think about achievements as some kind of "offline" competition.

Yeah, that wouldn't be a healthy attitude for me personally. I can't control what other people do, so I'm not going to let my happiness be contingent on their actions. :)

These kinds of tools have been around for over a decade now, so I can either sit around and worry about the integrity of Steam's achievement system, or realize that the integrity was an illusion all along (though a pretty passable approximation) and get on with my life (and earning more achievements for myself ^_^).
1 Likes, Who?

This hadn't even occurred to me, though it seems obvious now it is mentioned. I was actually going to download it to use for some games (12 is better than 6, is the first that comes to mind) where achievements were broken on Linux when I played it, to make Steam reflect the actual situation. I've also known games not trigger achievements sometimes (like a bonus achievement for unlocking all others (DOTT Remastered, I'm looking at you,) so there's a few legitimate reasons someone might want to use this that aren't about cheating.
0 Likes
« 1«3/3
While you're here, please consider supporting GamingOnLinux on: