The Linux 'Desktop Entry Specification' gets a way to automatically use a discrete GPU, merged into GNOME

For some time now, the GNOME desktop has had the ability to launch specific games and applications using a more powerful GPU if you're in a multi-GPU environment and now it's advancing further.

In GNOME, when the ability to launch using a dedicated GPU was added back in 2016 you were able to right click on something and then see this menu (using switcheroo-control): 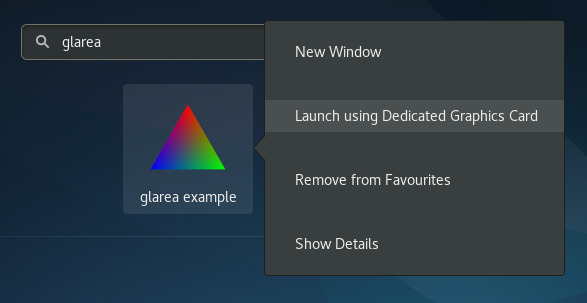 The freedesktop "Desktop Entry Specification" has since been updated, with a brand new option named "PrefersNonDefaultGPU". If that is present in a .desktop launcher file for a game or application and set true, it will then automatically use your more powerful GPU.

Since you might not always want that, the right click switcheroo menu will now have the option to use your integrated GPU if it's all hooked up nicely.

It's not a huge change overall but obviously a very welcome one, there's plenty of games and applications that simply work better (or at all) on a dedicated GPU and this is one of those little paper-cut style issues that can just make the Linux experience better overall. It's already been merged into the GNOME desktop for a future release as noted by developer Bastien Nocera in a blog post.

Article taken from GamingOnLinux.com.
Tags: GNOME, Hardware, Upcoming, Update
27 Likes, Who?
We do often include affiliate links to earn us some pennies. We are currently affiliated with GOG, Humble Store and Paradox Interactive. See more here.
About the author - Liam Dawe

View PC info
The next step is up to NVidia to get their Optimus Support on Linux in order and more out of the box. Without the requirement for 3rd party tools or patched XOrg servers... x.x

fagnerln 6 May
View PC info
How good is this feature with old hybrid AMD notebook? It's an A6 with some HD6000, I don't remember well
0 Likes

adibuyono 6 May
View PC info
Never saw those "launch with discrete graphic card" until I install Pop! OS 20.04
1 Likes, Who?

View PC info
You need to install this in order to see the launch option on GNOME Shell: https://gitlab.freedesktop.org/hadess/switcheroo-control


Last edited by Leeo97one on 6 May 2020 at 6:12 pm UTC
1 Likes, Who?
mcphail 6 May
I package a few games. I'm not sure whether to add this to the .desktop files. Would it be seen as user-hostile if I was making this default decision for users? Most of the games I package would run satisfactorily on integrated graphics but might be better on a dedicated gpu.
2 Likes, Who?

Quoting: fagnerlnHow good is this feature with old hybrid AMD notebook? It's an A6 with some HD6000, I don't remember well

The A6 series laptops did not have a discrete graphics card, those were the APU's integrated graphics.

Haha. Nice stealth shout-out to SweetHome3D. That program is an amazing example of Java portability done right (surprising us all).

I keep feeling like I should be using a proper CAD program, but SweetHome is just so damn versatile if you are designing a house...
1 Likes, Who?

Quoting: mcphailI package a few games. I'm not sure whether to add this to the .desktop files. Would it be seen as user-hostile if I was making this default decision for users? Most of the games I package would run satisfactorily on integrated graphics but might be better on a dedicated gpu.

There are laptop configurations where the dGPU is functionally slower than the iGPU. My laptop for example is like that, the iGPU and dGPU are rated at just about equal performance but either due to thermal issues (single, shared heatpipe) or other overhead the dGPU consistently under-performs. On the other hand though, these kinds of systems are basically broken designs, so they may not be worth working around.

If you are unsure then relying on the default behaviour where GNOME optionally allows launching games using the dGPU is probably fine.

View PC info
We definitely need more of this kind of thing.

Freedesktop is a great org, and it's something that should be more significant on Linux, I would love to see it's position elevated even higher.

Quoting: fagnerlnHow good is this feature with old hybrid AMD notebook? It's an A6 with some HD6000, I don't remember well

The A6 series laptops did not have a discrete graphics card, those were the APU's integrated graphics.

I sold my old notebook to a cousin, but I'm just curious because I'm waiting a good support to recommend Ubuntu to him.

I'm pretty sure that it have discrete GPU, on windows is possible to set to use the iGPU, dGPU or hybrid crossfire, which when the game support CrossFire works really well, improving a lot the performance
1 Likes, Who?
1/2»
While you're here, please consider supporting GamingOnLinux on: