Are you confused what Proton is? See our dedicated Steam Play page for info.

VKD3D was originally a project created directly by the Wine team, the compatibility layer that Proton is built upon. However, the original founder passed away and it seems Valve-funded developers are taking the torch to push it much further. It's actually been a thing for a while but today they adjusted the name of their project as VKD3D-Proton, to give it some official status plus preventing any naming conflicts elsewhere and just be clear about their goals.

They're going for supporting the "full" Direct3D 12 API on top of Vulkan, with an aim of both performance and compatibility using modern Vulkan extensions and features, so this comes at the expense of compatibility with older drivers and GPUs. They're also not looking to keep backwards compatibility with the original vkd3d.

Recently, the project also merged in code to allow for a standalone D3D12 build. Like with DXVK, we might even see gamers on Windows using it in future. Yes, that's actually a thing and there's many more like it as it can boost performance on Windows too for older games.

See all the details on the updated VKD3D-Proton page on GitHub.

With the recent news that the massive Cyberpunk 2077 is going to be DirectX 12 only, perhaps VKD3D-Proton can get into a state before release where it might run it well on Linux, since CD Projekt aren't likely to bring it to Linux officially.

View PC info
if the marketshare keeps going up we may see alot of ports.it has been a very interesting year so far.the marketshare is the biggest its been ever.its currently sitting at over 3% almost hitting 4%.
3 Likes, Who?

aufkrawall 6 Jul, 2020
View PC info
Can anybody tell whether it will be possible to completely avoid any additional shader compile stutter vs. native D3D12?
1 Likes, Who?
mphuZ 6 Jul, 2020

QuoteThey're also not looking to keep backwards compatibility with the original vkd3d.

View PC info
Wow, I had missed the original piece of news. This was a saddening moment, but that person has my respects. Kudos on Valve for picking the baton up :)

IIRC (I might be wrong on this one) Windows game ship with precompiled shaders for common GPUs, so we're quite far from this. Fossilize and Steam's distributed shader cache should help a whole lot (also on windows if/when it's there)
4 Likes, Who?

Yes, if the game isn't completely broken. A Vulkan extension to allow that came out recently, we're still waiting for proper driver support though.
18 Likes, Who?

Solarwing 6 Jul, 2020
Great news!It will be very interesting in the future to see will the dog(Windows 10) wag his tail(Linux) or the other way around so to speak.I believe that the latter option(Linux) prevails

Yes, if the game isn't completely broken. A Vulkan extension to allow that came out recently, we're still waiting for proper driver support though.

Thanks for letting us know, these are terrific news.
I guess for <= D3D11 this will remain impossible?

I was keen about Gallium Nine due to this, though its CPU bound performance can't cope with DXVK.
0 Likes

View PC info
I knew the dxvk guys were working on vkd3d, I didn't realise it was a fork of the original wine project. Interesting.
1 Likes, Who?
Linuxwarper 6 Jul, 2020

Quoting: vipor29if the marketshare keeps going up we may see alot of ports.it has been a very interesting year so far.the marketshare is the biggest its been ever.its currently sitting at over 3% almost hitting 4%.

If? I am very confident marketshare will go up. More pressing questions will be how fast and what are the threats to this growth. One way to stifle Linux adoption would be introducing a tech that will be either impossible to make work through WINE or very difficult (DXR). In other words baking more proprietary software into games to hinder them from running.

Below is a graph that displays suscribers to /r/Linux_Gaming. Notice how ever since 2018 (Proton announcement) there has been a sharp uptick?
I would guess 2016-2017 is Steam machine hype dying totally down. 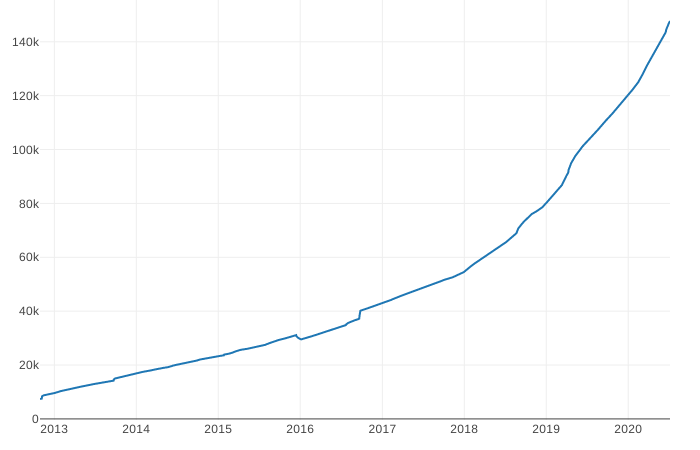 View PC info
So does it also compile into DLL like dxvk? Also, was it forked due to original project stalling or due to relying on cutting edge Vulkan features that original vkd3d might try to avoid?