Top marks for ambition on this one, as Antimatter from developer Geoffroy Pirard is planned to be a 4x city-builder where you can explore space and colonize many other planets.

It doesn't seem to really fit into a few standard genres. Is it a city-builder? Yes. Is it a game of space exploration? Seemingly also yes. The developer explains how each planet can be explored and built up with different biomes, native cities, hidden structures, forgotten civilisations and more surprises to find. Not always peaceful either, some planets as expected are quite dangerous places to be exploring. 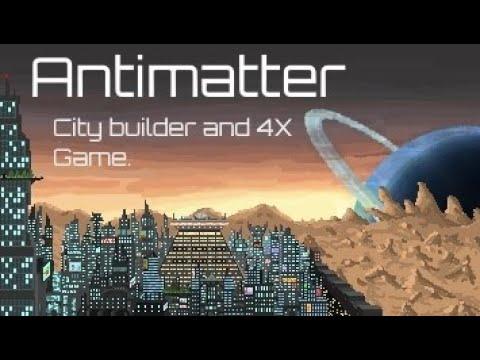 Not only is it a galaxy-spanning exploration city-builder, there's also elements of a management game here too. You deal with industry, policies, taxes and trade as well. There's even a crafting system, and you will be building all sorts of rockets and space stations - it's got a small bit of everything it appears.

What's just as impressive is the destruction system - as the developer explained that it's all fully simulated. Every pixel can be destroyed or altered on planets, while you dig for ruins or destroy them with big weapons the choice is yours. To go along with that there's some physics systems too, like water and lava flows and there's even a planetary weather system.

It's currently crowdfunding on Kickstarter, after a brief first failed attempt under the name of War Industry - it seems they decided on a different direction with it. Their tiny goal of €2,500 has been reached so it's already funded with 21 days left to go - so we've added it to our dedicated Crowdfunding Page.

Find it on Kickstarter here.

View PC info
Well, if that does come to fruition, it would scratch so many itches I won't have to shower for weeks!
1 Likes, Who?

This looks like very interesting project and the author looks like a guy with a passion. This is one of the projects I would gladly support on Kickstarter. So I did :-D
1 Likes, Who?

View PC info
The "galaxy wide city builder" reminded me of Perry Rhodan: Operation Eastside, which was basically that: A city builder where you could colonize many, many planets, and if so inclined, build up cities on each of them manually.

After watching the video it is quite clear that this project is different though - reminds me more of Terraria to be honest.
0 Likes
Nagezahn 23 Sep

Wow, huge scale indeed. Honestly, this sounds like it will never be done. In the trailer he says he plans to hire talents to add more content - I wished he said to help him get stuff done more quickly and possibly in better quality. Has he published anything yet? I've been there myself, wanting to get the best game with the most features out there all on my own (or a small inexperienced team) - like I guess most people trying to get into game development have.

View PC info
Interesting and ambitious. I am always a bit worried about those people working at night for passion. Afraid they hurt themselves. It made me think of a mix of Terraria and Stellaris. It also sounds like those games you sink hundred of hours into. A bit for hardcore gamers.

I hope this comes to fruition. I sympathize with the gentleman.

Thanks for the nice comments and for the ones that backed on kickstarter.

QuoteHonestly, this sounds like it will never be done

I get your point, that is why I am going for short and modular development cycles meaning that I will release part of the game as early as Q1-Q2 of 2021.
more details : https://www.kickstarter.com/projects/geopi/antimatter-a-city-builder-and-4x-game/posts/2958954

Many peoples have burned theirs trust on solo devs that couldn't fulfill a project, so making a a short deadline to release a module should be an effective way of kicking myself in the balls to get something playable to the public.

If you want to keep an eye on the project I will publish the link of a website where I will setup presentation and a forum for the game.

Quoting: geoffroypirI am going for short and modular development cycles

That sounds like a smart choice to me. It should help with completing and polishing a feature before tending to the next. So I'm all in for you proving my concerns wrong.