Linux Mint teams up with Peppermint OS on a WebApp Manager

In the latest monthly news on the Linux Mint distribution blog, Mint's Clement Lefebvre talks about a new and interesting application being made.

They're calling it a WebApp Manager, with the idea that it will help you turn your favourite websites / online web applications into standalones as if they were desktop applications. It's an interesting idea, and one attempted a few times. You can already do so yourself with a bit of know-how but it's not always easy and the end result isn't always great. Which is where this new WebApp Manager comes in.

Rather than entirely reinvent the wheel though, the Mint team is joining hands with another Linux distribution with Peppermint OS as they already have a similar tool called ICE. They're currently looking at the best way they can work together on it all.

With it their idea is that you can have a dedicated application to create and edit these dedicated standalone web applications. Allowing you to give it a dedicated window you can easily alt+tab to, pin it to your window bar, work with multiple browsers, have its own profile and so on. 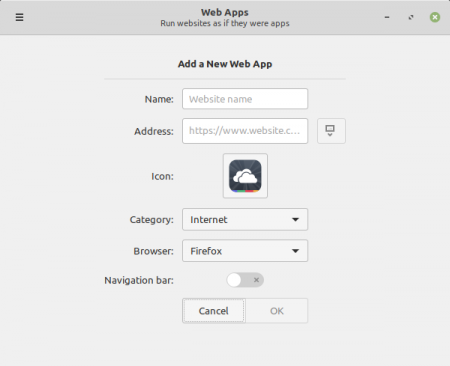 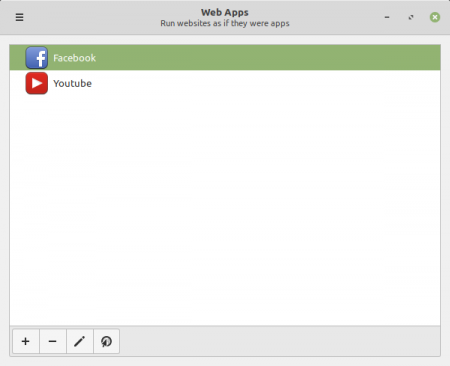 This sounds quite useful, I can think of a number of uses for it already. With the rise of various game streaming services like Stadia and GeForce Now for example, having a quick and super easy way to just give them a dedicated space would be interesting. The same for services like YouTube music and more. There's probably many other uses for it.

Mint's Lefebvre also mentioned that their Warpinator network transfer tool is now available as a Flatpak on Flathub, so any distribution can now use it. Nice.

That's actually a project I contributed to, a few years back

PeppermintOS's main developer, Mark Greaves, passed away in 2019 and I stopped using the distro, so I've not heard back recently.
0 Likes

View PC info
Another project that turns websites into desktop apps with the help of Electron is Nativefier:

Very stable, I can recommend it. I used it so far with WhatsApp, AirConsole and Just Dance Now.

It wasn't possible to make it work with GeForce NOW though, as GFN requires opening a new browser tab to log in.

View PC info
I love how simple and user friendly this looks. It's just so "point and click". Awesome!

I imagine this will be very useful for anyone using web based clients for game streaming, or for Netflix, Youtube, or any number of other websites.

What I also like is that instead of creating a brand new project from scratch, they are working with others and improving an existing application. Fantastic.

Would be happy to see more stuff like this in the future.
2 Likes, Who?

View PC info
It might be that I'm a bit spoiled using XFCE's launcher plugins for things like this (and one of the things that keeps me so, so deeply in love with the mouse-that-roars distro). To be fair, though, this app does make things one step simpler by writing the command for the user. It's nice non-mouse-eared folks can do this easily now. :)
0 Likes

View PC info
The reason why I would want something like this is to get it to use proper fullscreen so vsync/gsync would work like it should. But this never seems to work for electron apps. I wonder if this is something that can be fixed.
0 Likes

Does anyone know what approach has the lowest memory overhead? Choosing Electron, vs Chrome, vs Firefox as the app wrapper?
1 Likes, Who?

Does anyone know what approach has the lowest memory overhead? Choosing Electron, vs Chrome, vs Firefox as the app wrapper?

I'd assume Firefox is still leanest on memory, or maybe GNOME Epiphany. While I wouldn't count on all websites working with Epiphany, I seem to remember it being leaner on memory... and features.
0 Likes
While you're here, please consider supporting GamingOnLinux on: