KDE releases the Plasma 5.20 desktop - just as beautiful as ever

Plasma is arguably one of the prettiest Linux desktop environments around, and it's highly configurable too. The KDE team just released a huge upgrade with Plasma 5.20. This is a massive release that upgrades all parts of the Plasma desktop.

Fans of Wayland which is gradually replacing X.Org, compatibility continues being a focus and they've managed to make more steps as of this release. They mentioned that since 2019 they set a priority goal to adapt everything to support Wayland and it's "starting to pay off big time" now. As of this release middle-click paste with the Klipper clipboard app now works, plus the launcher/search tool KRunner now shows up correctly. Mouse and Touchpad support is getting close to being on par with X too, screencasting is now supported and more. Lots of steps taken.

That's just the under-the-hood stuff, tons of user-facing changes and improvements can be found across the whole desktop like the task manager being icon-only by default. A nicer default I think, as grouped icons look great and save precious space.

There's also new on-screen displays when you perform various actions like adjust volume, the system tray pop up now uses a grid rather than a list which looks a huge amount better, the digital clock widget is a bit more compact and has the date by default, the ALT keybind to hold and then drag windows around was moved to the Super key (also known as the "Windows" key) which is a nicer default with so many games needing the ALT key it was a common interference and the list of subtle improvements goes on for some time. Little things add up, and sane defaults are seriously important.

You can also find a newer Plasma Disks application which will add storage drive S.M.A.R.T monitoring directly into your System Settings — nice!

Check out their new release video: 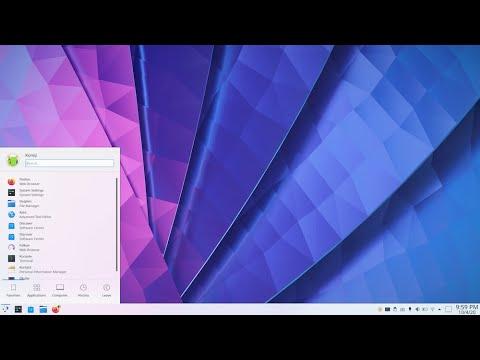 We do often include affiliate links to earn us some pennies. We are currently affiliated with GOG and Humble Store. See more here.
About the author - Liam Dawe
I am the owner of GamingOnLinux. After discovering Linux back in the days of Mandrake in 2003, I constantly came back to check on the progress of Linux until Ubuntu appeared on the scene and it helped me to really love it. You can reach me easily by emailing GamingOnLinux directly.
See more from me
Some you may have missed, popular articles from the last month:
The comments on this article are closed.
24 comments
Page: «3/3

My mistake, should have said compiz.

Xfce still uses Xfwm by default and it was developed from scratch.
I'd argue you can count Xfce users who use anything but Xfwm or Compton with your fingers ;)

I agree - but only until you try kwin-lowlatency xD

KDE is still my favorite by a long shot. I just hope this icon-only task manager crap will not be the only option in the future ^^

Cool! Should probably give it a try!
0 Likes

My mistake, should have said compiz.

Xfce still uses Xfwm by default and it was developed from scratch.
I'd argue you can count Xfce users who use anything but Xfwm or Compton with your fingers ;)

Also just to make this clear, Compton is based on Xcompmgr, not Compiz or Metacity.
0 Likes
« 1«3/3
While you're here, please consider supporting GamingOnLinux on: