System76 are doing some serious magic with Pop!_OS and Auto Tiling

With the release back in April of Pop!_OS 20.04, the distribution made by hardware vendor System76, it came with an impressive Auto Tiling feature that System76 continue expanding.

Stacking is the name of a new feature recently included (source), which allows Pop!_OS 20.04 users to stack together tiled windows. The result is that it should make it easier to organise your tiled windows in the same workspace without sacrificing window size and it's especially useful for smaller screens like laptops.

It looks like it combines their awesome Auto Tiling with a form of Alt+Tab to produce a really useful way to manage your workflow. Take a look: 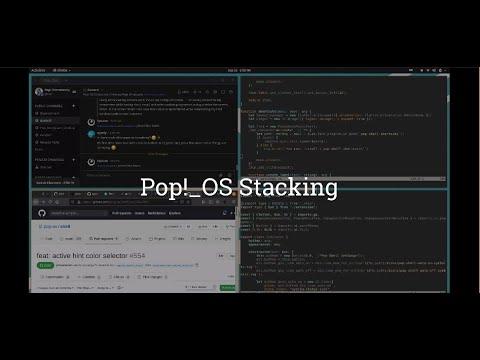 Replying to some quick questions of ours on Twitter, the System76 CEO Carl Richell mentioned that this feature was added towards the end of September 2020. Users on Pop!_OS 20.04 just need to check for updates to grab it. Richell also mentioned to us that the video above was captured on a 14" 1080p screen and that "Four floating windows would be hidden behind each other and you’d have to alt+tab your way through to find what you want. With tiling it’s all in front of you and easy to navigate with super+<>".

If I ever leave my new comfort of EndeavorOS, I think my next stop will be Pop!_OS for sure. Pop!_OS is pretty popular too, with the Steam Hardware Survey (filtered to just Linux) for September 2020 showing it has gained 5.72% of users there. That's a lot, considering the highest individually shown distribution is Ubuntu at just at 21.34%.

Previously, Pop!_OS was showing as Ubuntu.

Learn more about Pop over here.

View PC info
I do not see any interest in that feature. It already exists in KDE and I found it not really useful. Alt+Tab + multiple desktops is already good enough.
1 Likes, Who?

Quoting: FauconNoirI do not see any interest in that feature. It already exists in KDE and I found it not really useful. Alt+Tab + multiple desktops is already good enough.

its usefull when you dont have an proper IDE for your job.
for instance, for years we didnt had any good game engine for linux, so i tried alternative workflows like opening an text editor+the project directory to manage the assets+an tile map editor and so on to make an game on it.
nowadays i just use godot, its an much better workflow, but depending on your task, you may not have an proper IDE for it...
1 Likes, Who?

View PC info
This is very useful. On my laptop screen I often have 2 windows side-by-side, which is already built into GNOME. But on a larger screen at work, I often end up having 3 or 4 "tiles" at the same time, and always wished for better support in the DE for that. But didn't really want to ditch GNOME completely in favor of a true tiling VM. I am the exact target audience for this.

Last time I checked they were not making this into a standalone extension, because what they are doing requires more invasive changes than it is possible via the extension API. Don't know the current status though.
1 Likes, Who?

View PC info
Very nice and very useful feature. Pop!_OS is a awesome Linux distribution. Especially the tiling features are great for large, small and ultra wide displays. I'm changed from Windows to Pop!_OS a week ago
6 Likes, Who?

Quoting: tmtvlOh wow, a feature that dynamic WMs have had since the '90s. Those system 76 guys are really on top of things huh.

As an i3 user, that was my first reaction. We should not mistake this with innovation, I agree they're just copying what's out there. However, System76 bringing this interaction model to the mainstream is *HUGE*. They are doing an outstanding work and none of it is a wasted effort. If this works well and gets user traction, others DEs are soon to follow.

Being able to drop into a vanilla GNOME desktop and just enable an extension to get an i3 like experience makes this kind of interaction more accessible to users who wouldn't be able to benefit from it otherwise.

Since I installed i3, I had to admit that only I can use my computer... Nobody will go through the trouble of learning your set of keybindings. You can imagine this leads to frustration when pair-programming... And wms like i3 do not play well with games. All in all, being able to opt-out of tiling at the click of a button comes in very handy.
7 Likes, Who?

Quoting: LinasLast time I checked they were not making this into a standalone extension, because what they are doing requires more invasive changes than it is possible via the extension API. Don't know the current status though.

This can be installed on any GNOME distribution provided that you have a recent-enough version of GNOME and a TypeScript compiler. The rebuild script in the repository will change and disable a number of GNOME's default shortcuts to make way for Pop Shell's keyboard shortcuts though. That's really the only invasive change. It's all built on GNOME's extension API.
1 Likes, Who?

View PC info
This stuff always confuses me, it's hardly unique to this but doesn't it sometimes seem like one step forward two steps back?

Desk real estate, the type of tasks you use your computer/screen for, portability all matter and make a huge difference in the decision. The problem I tend to see, and this is absolutely my circle/work/things like that, is people often just aren't using their critical thinking skills or want the latest shiny without really considering what it's for.

Assuming a person has the space and the ability to make the decision, often times multiple screens make WAY more sense then single giant screens, but it's also out of style, so way too often I see people use these "solutions" to problems they created themselves. You see this trend with window managers as well, some of them obviously target single-screens with dual or more being an afterthought.
0 Likes

Quoting: setzer22Since I installed i3, I had to admit that only I can use my computer... Nobody will go through the trouble of learning your set of keybindings. You can imagine this leads to frustration when pair-programming... And wms like i3 do not play well with games. All in all, being able to opt-out of tiling at the click of a button comes in very handy.

Yeah, that's why I use Awesome as the WM for KDE. Plenty of mouse interaction possibility for those who don't want to learn how to switch between workspaces, apps, or sorting options.
0 Likes
1/2»
While you're here, please consider supporting GamingOnLinux on: