System76 unleash a quad-GPU Linux monster with the 'Thelio Mega'

What has four GPUs and could probably heat up your entire house? System76 have announced the Thelio Mega and it's absolutely ridiculous.

System76 say that the Thelio Mega is the world's smallest quad-GPU workstation primarily made for deep learning and scientific computing. I'm sure that won't stop someone trying to play games with it though as this might be (probably is) the most powerful Linux desktop you can buy and it's gorgeous too.

"Thelio Mega is our LeMans hypercar," says System76 CEO Carl Richell. "We've put all of the most advanced engineering and technology into Mega with stunning results that perform well beyond industry standard quad GPU systems. It's compact, quiet, exceptionally performant and strikingly beautiful."

Ready to uncontrollably drool? Have a look at some of the possible specifications:

With all that power comes great responsib…heat. That's why System76 took great care with the airflow on the Thelio Mega. Rather than a single vent for the system, they have intake fans on the bottom and side panels to feed cooler air directly onto the GPUs. They said that everything "down to the GPU brace, developed to secure GPUs for transit, has been tested for maximum thermal efficiency".

That's not all though, there's a separate duct that isolates the airflow to the beastly AMD Ryzen Threadripper, plus a dedicated intake vent on the side to send a cool breeze towards the heatsink too. They're using a "closed-loop phase change" which has actuating fluid evaporate into a gas to draw thermal energy away from the CPU and towards the heat sink, where it's then cooled into a liquid and returned to the transfer plate. After that, all the hot air then exits via the exhaust port. They say doing all this gives performance "similar to if the components were sitting on a test bench". So they have some fancy water cooling system in place.

To top it off they have large 120mm and 140mm fans for each section plugged into their dedicated fan IO board, and then tied into a Thelio IO board. System76 said this design "allows for each thermal system to be independently controlled for maximum performance, as well as for easy servicing - when panels need to be removed, simply unplug the fan IO board and slide off".

Check out our little gallery of snaps System76 sent over (click to enlarge / view gallery): 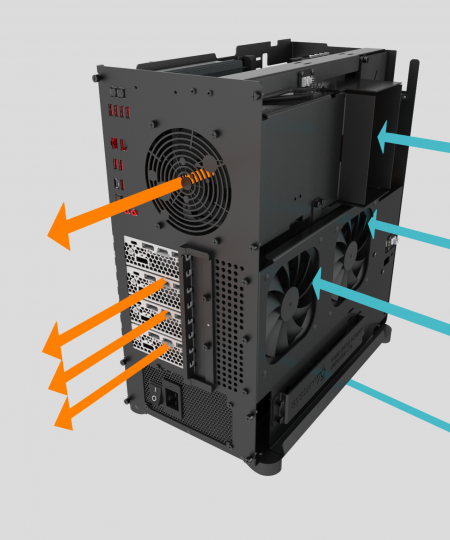 I absolute adore the vent design on this, such awesome style. Honestly, if System76 sold their own cases for generic systems for users to make their own, I would quite probably buy one because they look so sleek.

Just like their previous Thelio units, the Mega is "open source hardware" which they have up on GitHub and it's hand-crafted in their own manufacturing shop in Denver, CO.

Available from today, pricing starts at $7499.99. See more on System76.com and head direct to the Thelio Mega page here.

QuoteHonestly, if System76 sold their own cases for generic systems for users to make their own, I would quite probably buy one because they look so sleek

View PC info
and a 60% keyboard, and no mouse

Anyone that's spending that sort of money on a computer for gaming definitely deserves to call themselves a "hardcore gamer"... And when I win the lotto, I'll buy one, just because I can.

Asking the real questions... Was wondering the same thing myself.

Strangely, we don't seem to have that model on the Australian website... We do have a couple of similar models though, and boy are they expensive (I still want one though)!

Fun fact - the model number for most of their high-end and "wide" displays ends in "SEXXY":
https://www.samsung.com/au/monitors/all-monitors/?32-and-above

Not sure if that was intentional or not, but I had a giggle...

This seems to be the closest we (Australians) have to that display above:
https://www.samsung.com/au/monitors/c49hg90/

It's similar, backing lacking certain features (such as USB Type-C), so the British link is probably a newer model of the same display that is not yet available in Australia.

Every monnitor generation I need to buy a bigger resolution just to not lose pixel height...!