As if 2020 couldn't get any weirder, today a press mail from Valve Software entered our inbox because Gabe Newell, president of Valve, is getting a garden gnome sent into space. Yes, really, truly this is actual news and a thing that is happening. No this is not Kerbal Space Program.

This isn't some big joke, far from it. Working with Rocket Lab, a garden gnome will be launched into space while Newell from Valve watches. So why? Newell has announced that for every person who watches the launch live or within 24 hours of launch, one dollar will be donated by Newell to the Paediatric Intensive Care Unit at Starship. With the email joking that this will help "Newell's ultimate dream -- launching a children's hospital into space -- but in the interim will be used for more practical hospital-related purposes". 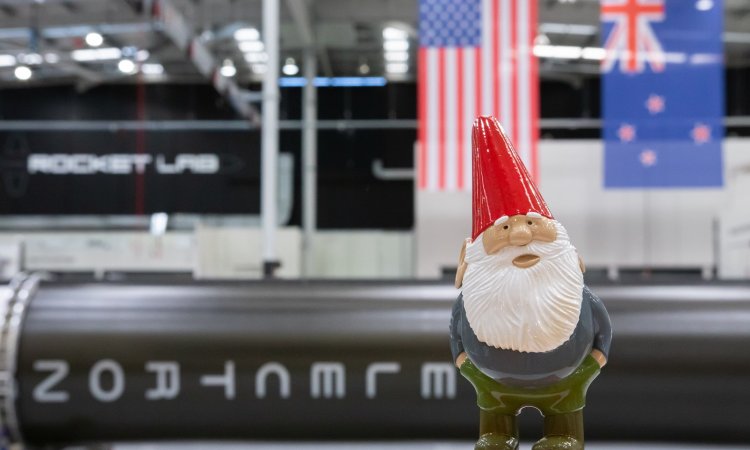 The gnome is no ordinary garden ornament either. Created with the help of Weta Workshop, not only is it printed in the shape of Half-Life gaming icon Gnome Chompski, part of this is also to test "and qualify a novel 3D printing technique that could be employed for future spacecraft components" and also as something of a homage to "the innovation and creativity of gamers worldwide". Sadly, Chompski is not expected to make it back to earth as it will burn up upon re-entry into Earth’s atmosphere during the de-orbiting process.

For those who didn't know, Gabe Newell has been in New Zealand visiting Weta Workshop and Rocket Labs, when the pandemic hit and has since called Auckland his temporary home. The email mentioned that Newell has been "looking for a way to help the economy and the community that sheltered him (or at least hasn't kicked him out yet)" and to assure the people of New Zealand that "his eccentric attempts at charity are largely harmless and pose no immediate threat to their way of life".

You will be able to watch it happen live at https://www.rocketlabusa.com/live-stream sometime on November 16 NZT / November 15 UTC with the exact time to be confirmed. More info on the full mission here.

Update: it happened, watch it here.

We do often include affiliate links to earn us some pennies. We are currently affiliated with GOG and Humble Store. See more here.
About the author - Liam Dawe
I am the owner of GamingOnLinux. After discovering Linux back in the days of Mandrake in 2003, I constantly came back to check on the progress of Linux until Ubuntu appeared on the scene and it helped me to really love it. You can reach me easily by emailing GamingOnLinux directly.
See more from me
Some you may have missed, popular articles from the last month:
The comments on this article are closed.
30 comments
Page: «3/3

Just about everything has been sent to space by now, from microbes to grown-ups... but never any children, who are indeed the ones dreaming of going to space.
I mean, I still do dream of going to space one day, but how pale in comparison is that to a child dreaming.
0 Likes

Quoting: The_Aquabatmore space waste, another drop in the ocean. who cares right?

The gnome is piggybacking on an already planned launch with 2 other payloads. Besides, it's all going in low earth orbit where space debris aren't really a problem (they de-orbit themselves after a while).


QuoteThe DRAGRACER mission will test the effectiveness of new tether technologies designed to accelerate spacecraft reentry and reduce orbital debris at the conclusion of space missions. TriSept has completed the integration of a pair of qualified Millennium Space Systems 6U small satellites, one featuring the tether drag device and one without. The controlled spacecraft should deorbit in approximately 45 days, while the second spacecraft is expected to remain in orbit for seven to nine years

Emphasis mine; that is quite a while to cause mayhem. Not that I expect it to, but still a significant amount of time even though it is "only" a low earth orbit of 500 km. The ISS flies at or below that altitude...
IMO LEO is precisely where space debris is most of a problem; of course it would be bad to lose a few geostationary satellites, but I think it would take only one or two significant collision events generating more debris to effectively deny use of LEO.

Quoting: The_Aquabatyeah sure the Gnome will turn into dust just like the Tesla Roadster (now it is orbiting Mars )
because we don't have enough polluting our own orbit

QuoteEmphasis mine; that is quite a while to cause mayhem. Not that I expect it to, but still a significant amount of time even though it is "only" a low earth orbit of 500 km. The ISS flies at or below that altitude...
IMO LEO is precisely where space debris is most of a problem; of course it would be bad to lose a few geostationary satellites, but I think it would take only one or two significant collision events generating more debris to effectively deny use of LEO.


in seven or nine years the gnome will accelerate many times the speed of a bullet, some minimize this problem, but objects that small hitting satellites or spacecrafts at very high speeds it is already a problem. you are right the Low Earth orbit is where most of the space litter causes more trouble.

QuoteI think it would take only one or two significant collision events generating more debris to effectively deny use of LEO.

you are right according to forbes


Quote“Two 9,000 kilogram objects hitting would double the low Earth orbit debris population in one instance,” says McKnight. “You would make 15,000 trackable objects. That’s the most consequential event that is possible. But it’s not a one in a million possibility, it’s one in a thousand each year.”

consider industrial deep diving. the ocean is almost the same as the space - tough, exp[A|E]nsive and homicidely inhospitable and unwelcoming for human species.

Also recommend SOMA. It has both and upon completing you just well may end up craving this Space of yours a little less. Kinda start valuing our old Mother Earth that little bit more.

I started playing SOMA, i should finish it some day.
I have alwas had a fear of drowning, but am fine with explosive decompression in space. Also, need to record a video going up so flat earthers can claim it is fake.
1 Likes, Who?

Quoting: Comandante Ñoñardoso...maybe....Is a sign that the game We want is coming..

Half-Life Alyx 2? Could be in the works I guess.

Quoting: orochi_kyoI always heard in politics this thing about the 1% deciding over 99%. And now in video games is happening too, 1% deciding over the rest of the people who doesnt care about VR.

Actually, it's developers and publishers who decide (and always did). That's as true for Alyx as it would be for a non-VR HL3.
0 Likes

Quoting: Comandante Ñoñardoso...maybe....Is a sign that the game We want is coming..

Half-Life Alyx 2? Could be in the works I guess.

Whether people want to whine about it or not, VR is basically the future.

A little off topic, but I may as well put some of this trip down memory lane here, as it somewhat applies;
I was thinking the last few days about how Atari in the beginning had all the support. Things happened and then other systems spawned and computers really took place of consoles for a time, and Atari in that field had crappy support, all from the Atari 8bit into their 16bit era. By this I don't mean that games weren't released for them. I mean that a large majority of games were written for the bare minimum. The lowest common denominator.
Have 64kb or 128kb ram in your system? Nice, but not much will take advantage of it. Most things were coded for either 16kb or 48kb, and only few things would take advantage of more, let alone actually be updated to require 64kb.
The Atari ST was the same way, take Shadow of the Beast for example. It was coded to run on an ST with 512kb of RAM and no blitter. Once the STe came out, barely any software really took advantage of that. Yet the Amiga version was coded to use the full 1MB setup even though not all of them had that. Games for the Amiga were definitely coded more to take advantage of all of the benefits of the Amiga chipset.
Let's switch gears to the PC development. As soon as new processors and soundcards and even random stuff like the Roland MT-32 had gotten support of various degrees. Then we had the steps from Mono, CGA, EGA, VGA, SVGA, etc. Then onto 3d acceleration, which there were so many variations of that, that most of them barely had 20 titles that took advantage of their particular video cards. But developers still tried to release patches for them, so many different ones until 3Dfx was finally the one people settled on, until DirectX came along...
Basically developers for the PC have always been pushing innovation and bleeding edge. Look at the adoption of RTX, a little slow at first, but now that the two main camps have are going to support it, we'll see how many games start pushing that tech as well.
And this is why VR will in the end be rather successful. Developers WANT that new medium to take off and push some of their creative dreams to people.
For a long time, my upgrade path had always been chosen by what Mame was doing. Since Mame doesn't use any GPU hardware acceleration, it's all CPU, and I kept trying to find a CPU that'd be fast enough to push the 3D games. I finally got that with my previous build, but now my upgrade path has been solely to see if I can get perfect framerates at high resolutions for Virtual Reality. Do I care about 4k/8k gaming at all? Nope. At the moment I can pretty much crank up details and run everything smoothly on my 3840x1200 monitor using my RTX 2080. But as soon as I try something in my Index, it doesn't run great... And that's what will drive my next upgrade path. And that is what developers are counting on. If developers didn't work on such things, then there'd be no reason to add more features to GPUs, and computing would in general just stagnate.

Let's be honest, if it weren't for some of these new features coming out, would anyone really upgrade their PC at all in 5 or 10 year periods at this point? You get people who are just edging for 10 more fps or something in their favorite game, but they usually just turn off all the graphical settings anyhow. I'm talking about all of those that want the most realistic and awesome looking environments and such that go for things like RTX, VR, etc. And I'm sure there is far more than just 1% that care about that.


EDIT:
Launch happened at 2020-11-20 2:20 UTC
https://invidious.snopyta.org/watch?v=eZGI_lHGltA
or find it with the same video ID on YouTube