Like many of you, I have certain fond memories of playing various Flash games many years ago. There's obviously many better ways to do web games now and Adobe are killing Flash in December.

On December 31, Adobe will be cutting off Flash from any further updates, it will effectively be End Of Life. There's a few projects around trying to keep it alive, like the open source Ruffle emulator written in Rust. Ruffle is still in development but even so the results are impressive, and it can already play thousands of Flash items. All you need is an up to date browser and it does it all for you with no plugins needed. If you have any Flash stuff, you can even test it online.

Seems people have taken notice of this effort, like The Internet Archive who are known rather well for their Wayback Machine that stores websites at various dates. Announced in a blog post on November 19, the archive's Jason Scott announced that they're now storing and emulating various Flash animations, games and toys in their growing collection. 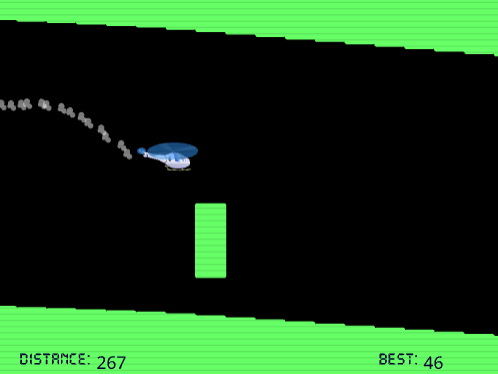 Helicopter Game is just as challenging as ever.

Quite a big collection is already brewing, with over 800 Flash creations now live on the archive which will no doubt grow pretty quickly over a short time.

The Internet Archive has moved aggressively in making a whole range of older software run in the browser over the past decade. We’ve done this project, The Emularity, because one of our fundamental tenets is Access Drives Preservation; being able to immediately experience a version of the software in your browser, while not perfect or universal, makes it many times more likely that support will arrive to preserve these items.

Flash is in true danger of sinking beneath the sea, because of its depending on a specific, proprietary player to be available. As Adobe Flash is discontinued, many operating systems will automatically strip the player out of the browser and system. (As of this writing, it is already coming to fruition a month before the end-of-life deadline.) More than just dropping support, the loss of the player means the ability of anyone to experience Flash is dropping as well. Supporting Ruffle is our line in the sand from oblivion’s gaze.

This initiative is not done just by The Internet Archive, they do acknowledge multiple others who have been involved in the process to get it rolling. They're also not the only one doing this, there's also BlueMaxima's Flashpoint.

You can see the full collection of Flash here from The Internet Archive.

View PC info
A Snake, a snaaaake!
7 Likes, Who?

View PC info
And alas, Gnash gets no love, let's rewrite it in Rust. Still, neat that Archive keeps flash stuff alive, it's really starting to become a digital museum.
2 Likes, Who?

View PC info
This is brilliant 😊 I hope they will be able to provide a drop-in replacement for most cases!
0 Likes

View PC info
Thinking about Flash I get memories of mid-90s 'multimedia CD-ROMs' put together with groundbreaking Macromedia technology. The internet archive has loads of those as well, by the way — and it's usually shocking how little content they actually had.

By the way, this is my favorite 'flash content' of all time:
https://youtu.be/qE6emvdmg-M


no one was mantaining gnash, other project have an better track record/sucess.
in any case, i think our best bet is using an virtual machine with flash installed on it.
especially an machine runing in the browser, since browsers have an great backward compatibility.

at least, until we can make sure that we can have full flash support, otherwise the emulation will be incomplete and we will not know what bugs we still have.

it aways have been.
0 Likes
While you're here, please consider supporting GamingOnLinux on: