Have some trendy Corsair hardware and you're a Linux user? You're in luck as ckb-next is a great open source alternative to their usual Windows-only applications.

Much like OpenRGB, it's community made and not officially supported by the hardware vendor. Don't let that stop you though, they're filling a gap for Linux users and ckb-next is actually great. For my own Corsair Strafe keyboard, it works really well. 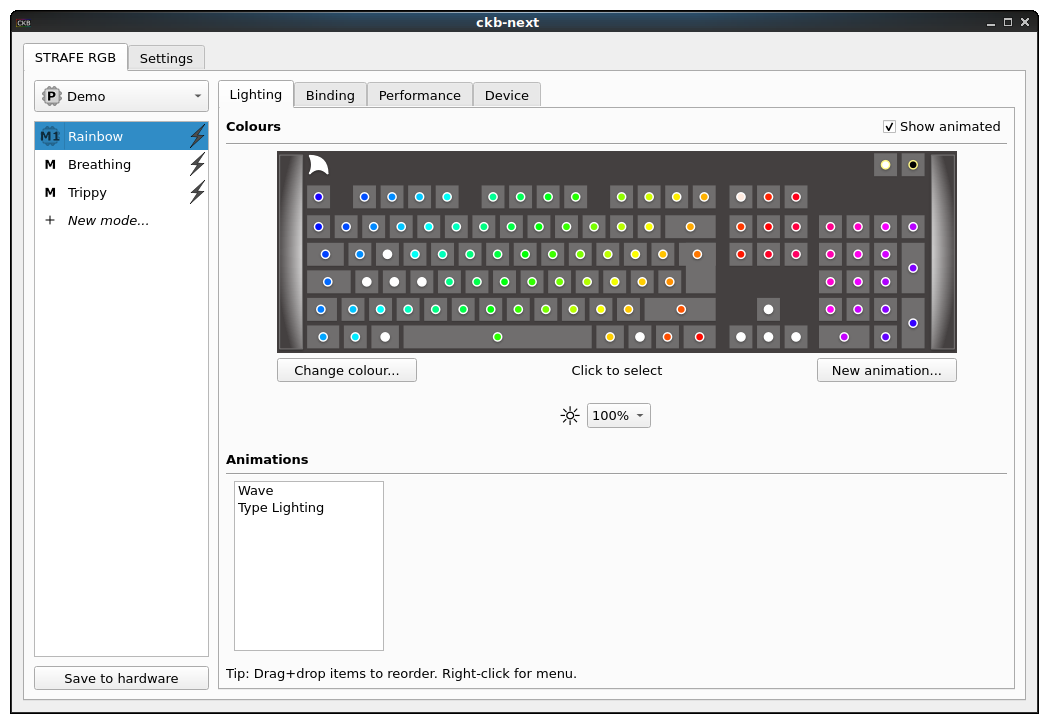 With the latest ckb-next 0.4.3 release they've added in support for the Scimitar RGB Elite and also the Nightsword RGB. So the full list of devices is now quite long. Other new features include the ability to turn lights off after a set time (X11 only), macros will now loop when a key is held down, the macro UI itself went through an overhaul, modes can be set to automatically change based on the currently focused application (X11 / XWayland only) and the application now supports translations too.

Quite a big release then looking at that! It also include a bunch of quite important bug fixes too with some freezes solved, layouts for K68 / K65 / K63 and M95 were fixed, mouse settings get restored properly when resuming from suspend, working input again on Wayland and more.

While I like OpenRGB and appreciate it trying to cover a huge amount of different vendors, I find ckb-next works better for my own device. I also like that ckb-next shows you exactly what to do when starting it for the first itme.

Find ckb-next up on GitHub.

Article taken from GamingOnLinux.com.
Tags: Apps, Drivers, Open Source
20 Likes, Who?
We do often include affiliate links to earn us some pennies. We are currently affiliated with GOG, Humble Store and Paradox Interactive. See more here.
About the author - Liam Dawe

View PC info
awesome!! it even updated my firmware on my keyboard.had no clue there was such a thing on the keyboard.love this
0 Likes

elmapul 22 Dec, 2020
View PC info
honestly i think those keyboards are an stupid trend, its a shame that we have to support that feature because some gamers think its cool and would refuse to use our system if we didnt support it, its a waste of effort that could be used to improve something more important (like wine) instead...

i dont see the point on it, distract you from the game you're playing? what happened to imerssion?
maybe it could be usefull for some applications that put the samek shortcut keys at different positions.

eg:
godot that uses qwe for grabing/scaling/rotating objects (like maya), and blender who uses g/s/r
if the colors that you put for those keys are the same, they can give you an clue that they do the samething.

other than that i see it as useless and distracting.

the most ironic thing is that devices like this, air drone etc, probably use linux, but have no official client for it (or at least didnt had at launch)
its almost like if they knew we would figure out an way to have acess by our selves, so they didnt spend the money on doing an official client to manage the device on our platform...

Quoting: elmapulits a waste of effort that could be used to improve something more important (like wine) instead...

We're talking about volunteers in an open source project. It's not a zero-sum game. People work on what they want to work on unless someone pays them to work on something else. And that's how it's supposed to be.
1 Likes, Who?

Quoting: elmapul...its a shame that we have to support that feature because some gamers think its cool and would refuse to use our system if we didnt support it....

What? Who is we? You including yourself? How is this a shame? You want Linux to cater only to your preferences? Are you from another planet? Maybe switch to Apple. Their ecosystem is more in line with what you're saying.

For me, the two new ckb-next features that are most exciting:
- Different profiles depending on application focus
- Pattern looping while holding a key
0 Likes
While you're here, please consider supporting GamingOnLinux on: